Naples boasts the Basilica of Saint Peter in Aram, which according to tradition was founded on the place where St. Peter baptized St. Aspren (1st-2nd century), the first bishop of Naples. 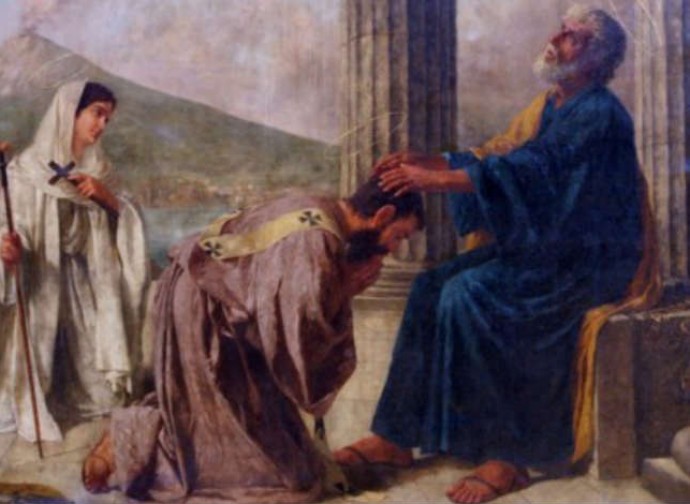 Naples boasts the Basilica of Saint Peter in Aram, which according to tradition was founded on the place where St. Peter baptized St. Aspren (1st-2nd century), the first bishop of Naples. It also houses the Ara Petri, the altar on which the Prince of the Apostles prayed and celebrated the Eucharist before going to Rome. The famous basilica, which over the centuries has undergone various renovations, is so antique that Pope Clement VII (1523-1534) granted it the privilege of celebrating and hosting the Jubilee one year after that of Rome: this custom was maintained throughout the 16th century (1526, 1551, 1576). Inside there is also a chapel dedicated to Aspren, considered the founder of the primitive place of worship from which the present basilica originated.

But under what circumstances did the saint celebrated today become a Christian? Hagiography links his name to that of Candida la Vecchia, a Jewish woman who, during Saint Peter's stay in Naples, begged him to cure her of a serious illness, promising to convert to Christianity. The apostle healed her. And Candida, venerated as a saint, decided to bring him a sick friend, our Aspren, who was in turn healed and converted. It is handed down that Peter himself consecrated him bishop and that among the acts of his episcopate there was the foundation of another paleo-Christian place of worship, dedicated to Santa Maria del Principio, later incorporated in today's basilica of Saint Restituta.

Among the documents of the first millennium that attest to his episcopal ministry is the Marmoreal Calendar of Naples, engraved in the 9th century. Aspren is invoked against migraine and venerated as the second patron saint of the capital of Campania, after Saint Januarius (and remembering that Santa Maria Assunta, Our Lady of the Assumption, to whom the Cathedral is dedicated, is officially the first Patroness of the city). Two historic Neapolitan churches are named after him, namely Sant'Aspreno ai Crociferi (begun in 1633) and the older Sant'Aspreno al Porto, built where, according to tradition, the saint's dwelling was located: in a cave.