The founder of the Missionary Sons of the Immaculate Heart of Mary and the Religious of Mary Immaculate, St. Anthony Mary Claret (1807-1870), was the fifth of 11 children. He was born to profoundly Christian parents who baptized him on December 25th (two days after his birth), with the name of Anthony Adjutor John. 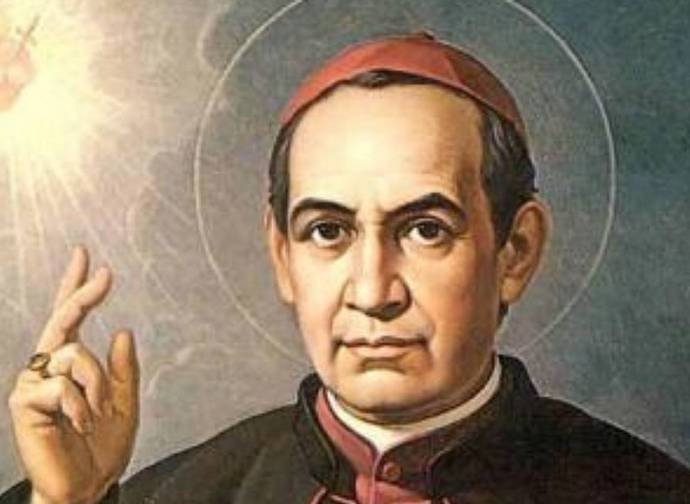 The founder of the Missionary Sons of the Immaculate Heart of Mary and the Religious of Mary Immaculate, St. Anthony Mary Claret (1807-1870), was the fifth of 11 children. He was born to profoundly Christian parents who baptized him on December 25th (two days after his birth), with the name of Anthony Adjutor John. As he would recount in his Autobiography, written in obedience to his superior, “out of devotion to Mary Most Holy I added the sweet name of Mary, my Mother, my patroness, my mistress, my directress and my all, after Jesus” (Aut. 5).

It was Our Lady who freed him from a couple of great temptations before he decided, at the age of twenty-two, to enter the seminary. In 1840, already a priest, he began the popular missions which led him to preach, for a total of nine years, in Catalonia and then in the Canaries. Together with the intercession of the Virgin and the other saints, he always remembered to ask for angelic protection: “I never forgot to invoke the glorious St Michael and the Guardian Angels – especially my own, those of the kingdom, the province, the city in which I was preaching, and of each individual present” (Aut. 268).

In order to increase the fruits of preaching, and aware of the need for a good Catholic press, he founded the Religious Bookshop. “Society is perishing for no other reason than that it has withdrawn from the Church’s word, which is the word of life and the word of God” (Aut. 450), he wrote with extraordinary lucidity. And he explained: “The ministry of the word - at once the most exalted and invincible of all ministries because it has overcome the world – has been converted everywhere from a ministry of salvation into a wretched ministry of ruin. And just as nothing or no one could hold back its triumphs in apostolic times, nothing or no one can hold back its ravages today unless it is confronted by the preaching of priests and with a flood of good books and other holy and wholesome writings” (Aut. 452). Coincidentally, several times Jesus and Mary confirmed the value of his writings through inner locutions.

On 16th July 1849, with five companions, he founded the Missionary Sons of the Immaculate Heart of Mary, today called Claretians. But a few days later he was surprised to receive the appointment as Archbishop of Santiago de Cuba. He landed on the island, at the time a Spanish colony, at the beginning of 1851. He travelled the length and breadth of his diocese, carrying out an immense amount of work. He reformed the clergy, preached against concubinage and for the greatness of marriage, defended the rights of the Church, cured cholera sufferers with his own hands, set up savings banks and work houses to improve the conditions of farmers and workers, and fought slavery. So much charitable work also created enemies, who tried several times to have him assassinated. For instance, on 1 February 1856, in Holguín, where a man armed with a razor seriously injured his left cheek and right arm. He lost a lot of blood and was left with scars. But the saint, instead of being saddened by the painful accident, rejoiced that he was able to shed blood for the love of Jesus and Mary. He also obtained a commutation of the assailant's death sentence to a term in prison.

The following year he was recalled to Spain and appointed confessor to Queen Isabella II. It was in his homeland that on 26 August 1861 he received the greatest mystical gift. On that day, “when I was in prayer in the Church of the Rosary, in the Granja, at seven o'clock in the evening, the Lord granted me the great grace of preserving the sacramental species intact within me, and of having the Blessed Sacrament in my bosom day and night. Because of this I must always be very recollected and inwardly devout. Furthermore, I must pray and confront all the evils of Spain (...)” (Aut. 694).  In particular, “the three great evils” which the Lord made known to him the next day: “Protestantism, or rather, the loss of the Catholic spirit, the Republic, and Communism. To combat these three evils, He showed me that three devotions should be practised: the Trisagion, the Blessed Sacrament and the Rosary” (Aut. 695).

The Spanish Revolution of 1868 forced him into exile in France. And there he died - after a last, vain attempt by his persecutors to capture him - on 24 October two years later. In the meantime, he had participated in the First Vatican Council, where on 31 May 1870 he gave a passionate speech in support of the proclamation of the dogma of papal infallibility, when the Vicar of Christ defines ex cathedra matters of faith and morals.

Autobiography and other writings (in several languages)