Saint Alphonsa of the Immaculate Conception

“I feel that the Lord has destined me to be an oblation, a sacrifice of suffering... I consider the day I have not suffered a lost day for me,” said Saint Alphonsa of the Immaculate Conception (1910-1946), a native of a village in the state of Kerala, India. 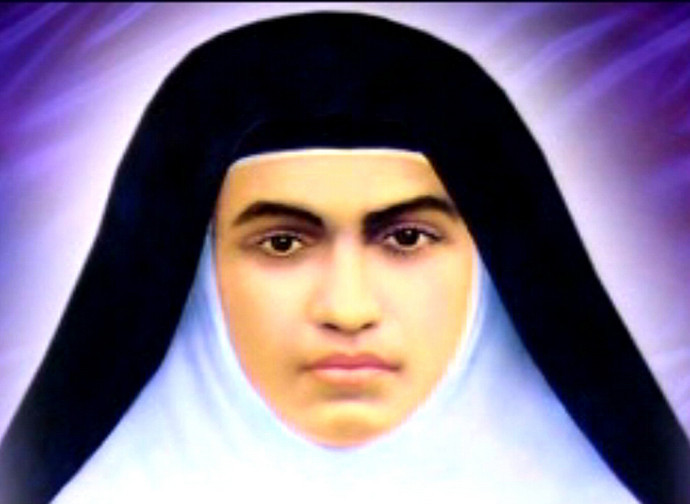 “I feel that the Lord has destined me to be an oblation, a sacrifice of suffering... I consider the day I have not suffered a lost day for me,” said Saint Alphonsa of the Immaculate Conception (1910-1946), a native of a village in the state of Kerala, India.

Anna Muttathupadathu, the last of five children, was born in the eighth month of pregnancy after her terrified mother Maria Puthukari awoke with a snake coiled round her waist. She was baptized on August 27, eight days after her birth, according to the Syro-Malabar rite of Indian Catholics who consider themselves heirs to the first converts of the Apostle Thomas, evangelizer of the Malabar region. Three months later, little Anna’s mother died, and she spent her early childhood in her grandparents' home. She remained very close to her father, who taught her to pray standing on the beach with open arms.

Her Christian upbringing was particularly well taken care of by her grandmother, who passed on to Anna her devotion to Saint Joseph. In honour of Mary's bridegroom, her grandmother went to Mass every Wednesday, the day when she welcomed some poor people into the house and gave the little girl the pleasure of giving them rice or other food. In addition to Sunday Mass, grandmother and granddaughter used to attend the liturgy on Fridays, in memory of the Passion of Jesus, and on Saturdays, in honour of Our Lady, as if to 'complete' the sacred gratitude to the Holy Family which is in the heart of every Christian. With her grandmother she recited the Rosary every evening and from her lips she often listened to some pages of the Story of a Soul by St. Therese of the Child Jesus, which inspired her passion for Carmel spirituality. When she was seven years old the long-awaited day of her First Communion arrived. “Do you know why I am so happy today? Because I have Jesus in my heart”, she told her companions. At the age of 33 she wrote to her spiritual director: “Already at the age of seven I was no longer mine. I was totally dedicated to my divine Bridegroom”.

More complicated was the relationship with an aunt, with whom she went to stay in 1920. This relative, who did not view Anna’s religious vocation favourably, tried in every way to foist on her an arranged marriage. Resolute to belong only to Jesus, Anna drastically decided to put one foot on a pile of burning embers, causing herself a serious burn: “My marriage had been arranged when I was 13 years old. What was I supposed to do to avoid it? I prayed all night... then I had an idea. If my body was a little disfigured, no one would want me! Oh, how I suffered! I offered everything for my great intention”. Despite the disfigurement of her foot, she had to endure at least one more attempt of an arranged marriage. But in the end she succeeded in fulfilling her vocation and, on the advice of her confessor, she joined the Franciscan Poor Clares (founded in 1888). On August 2, 1928 she began her postulancy and took the name of Alphonsa of the Immaculate Conception, out of devotion to Saint Alphonsus Maria de' Liguori and Our Lady.

In the period 1930-1935 her health seriously deteriorated, with purulent wounds on her legs, and haemorrhages. For some time she had to interrupt her novitiate. When she was able to resume it, she wrote: “I do not want to act or speak according to my inclinations. I want to be careful never to turn anyone away. I will only speak to others in sweet words. I want to strictly control my eyes. I will ask forgiveness from the Lord for every little lack and atone for it with penance. No matter what my sufferings may be, I will never complain and if I should suffer any humiliation, I will seek refuge in the Sacred Heart of Jesus”. On August 12, 1936, she took her perpetual vows, living a day of unspeakable spiritual joy. Illness continued to wear away her body. But Sister Alphonsa continued until her death – when she was 36 years old – to happily unite her sufferings to the cross of Christ, out of love for the Bridegroom's saving plan. She was beatified in 1986 and canonized in 2008: in both cases the miraculous healing of children with deformed feet was recognized.