We often wrong Saint Thomas, also known as Didymus (both names, the first Aramaic and the other Greek, mean “twin”), by remembering only his disbelief. This, among other things, plays a providential role in the economy of salvation, as Saint Gregory the Great effectively explained in one of his homilies. 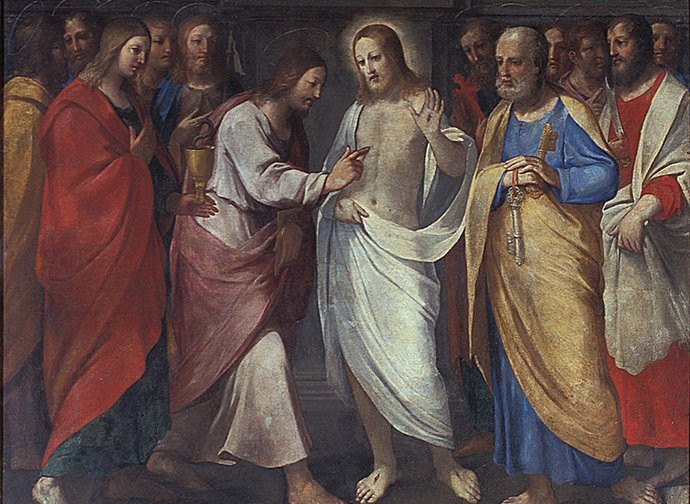 We often wrong Saint Thomas, also known as Didymus (both names, the first Aramaic and the other Greek, mean “twin”), by remembering only his disbelief. This, among other things, plays a providential role in the economy of salvation, as Saint Gregory the Great effectively explained in one of his homilies: “Thomas, one of the Twelve, called Didymus, was not with them when Jesus came. This one disciple was absent. [...] What, brothers, can we read into all this? Do you attribute it to pure chance that this disciple chosen by the Lord was absent, and then coming he heard the fact, and hearing he doubted, and doubting he touched, and touching he believed? No, this was not by chance, but by divine disposition. The Lord's mercy acted in a wonderful way, for that disciple, with his doubts, while he touched his Master’s wounds of the body, healed in us the wounds of disbelief”.

The tangible presence of the risen Christ transformed the incredulity of Thomas, reproached by Jesus, into an open and moving profession of faith: “My Lord and my God!” (Jn 20:28), the Apostle exclaims, overcoming all doubt and helping with his witness all those of whom Jesus says: “Blessed are those who, though they have not seen, will believe”.

Alongside this very famous episode, two other significant passages in which the saint is quoted by the evangelist John should be remembered. The first reveals the authentic love of Thomas for the Lord. In fact, in the account that precedes the resurrection of Lazarus, when Jesus decides to return to Judea and the disciples are hesitant because they know that the Jews want to kill their Master, it is Thomas who puts an end to the vacillations: “Let us also go that we may die with him”. (Jn 11:16). The second episode is linked to the Last Supper, when Jesus exhorts the Apostles to have faith because He will go to prepare a place for them in the house of the Father “and of the place where I go, you know the way”. It is Thomas who asks the question about what this way is and, once again for the benefit of the generations to come, Jesus answers him: “I am the Way, the Truth, and the Life; no man cometh unto the Father, but by Me” (Jn 14:6).

According to tradition, Saint Thomas evangelized Syria, Persia and finally India, where he witnessed to Christ until his martyrdom in 72, near today's Mylapore. He was killed with a spear, one of his iconographic symbols. The writings that bear his name are apocryphal because they date back to later periods, from the second to the fifth century, and present marked Gnostic accents. Many of his relics are preserved in the Basilica of St. Thomas the Apostle in Ortona, Abruzzo.