"Virginity merits praise not because it is found in martyrs, but because it forms martyrs", wrote Saint Ambrose (340-397) in De Virginibus, speaking of Agnes, the Roman girl killed for her Christian faith when she was barely 13, and whose martyrdom made a profound impression on the Christian community, giving rise to a fervent popular piety. 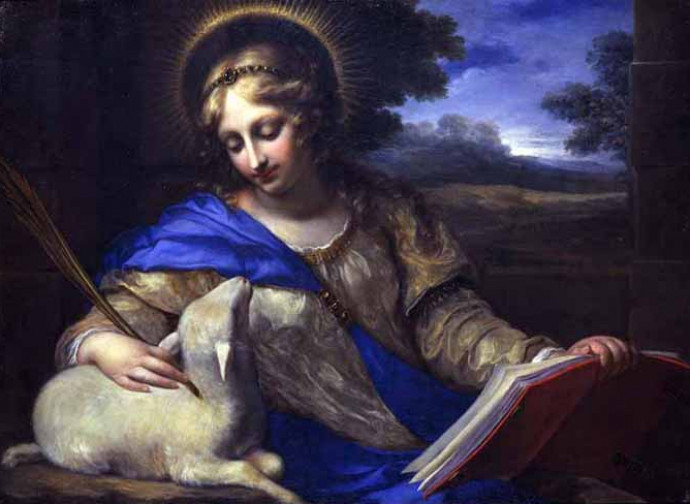 "Virginity merits praise not because it is found in martyrs, but because it forms martyrs", wrote Saint Ambrose (340-397) in De Virginibus, speaking of Agnes, the Roman girl killed for her Christian faith when she was barely 13, and whose martyrdom made a profound impression on the Christian community, giving rise to a fervent popular piety. The exact year of her birth into heaven is uncertain, but her martyrdom is likely to have occurred during the Great Persecution of Diocletian (around 305), a few years before Christians obtained freedom of worship. Certainly, the veneration of Saint Agnes was already widespread even before Ambrose, as emerges from the Depositio Martyrum of 336, the ancient calendar of the Church of Rome in which her burial on the via Nomentana is indicated on January 21st.

The best-known hagiographic source is a 5th century Latin Passio, based on oral tradition, according to which Agnes, who was born of a noble Christian family of Rome, had consecrated her virginity to Christ, being inflamed with love for him from a very tender age. Eager to abide by her vow, she rejected the prefect's young son who had fallen in love with her; for this reason, she was denounced as a Christian and stripped in public, but managed to cover herself with an ultimate act of modesty. According to the hymn to Agnes contained in Prudentius' Peristephanon (c. 348-410), the Saint had been exhibited in a brothel, where none of the patrons dared to approach her, except a young man of evil intent, who was blinded by the glow of an angel but later recovered his sight through the intercession of Agnes herself.

Agnes was killed by either beheading or jugulation: that is, her throat was cut in the way lambs were killed (otherwise, according to a poem by Saint Damasus, she was martyred at the stake). For this reason, artists have often portrayed her in the company of this animal, a symbol of innocence also connected with the name Agnes, which means "pure, chaste". In this regard, Ambrose, again, exalted her eternal glory: "In devotion, beyond her age; in virtue, above nature: she seems to me to have borne not so much a human name, as a token of martyrdom, whereby she showed what she was to be. […] You have then in one victim a twofold martyrdom, of modesty and of religion."

Saint Agnes has the privilege of being among the seven ancient martyrs – together with Lucy, Agatha, Anastasia, Cecilia, Felicita and Perpetua – to have her name included in the Roman Canon. Among her keenest devotees was Saint Costance (318-354), daughter of Emperor Constantine, who was miraculously healed after visiting her tomb and, out of gratitude, had a basilica built (today's Basilica of Saint Agnes Outside the Walls, rebuilt in the 7th century) over the Catacombs which were later dedicated to her.