On 27 December 1673, on the feast day of St. John the Evangelist (the apostle who at the Last Supper laid his head on the breast of Our Lord to know who would betray Him), St. Margaret Mary Alacoque (1647-1690) had the first great revelation about the secrets of the Sacred Heart of Jesus, which filled her with His divine presence while the Visitandine (Visitation) nun was gathered in Eucharistic adoration. 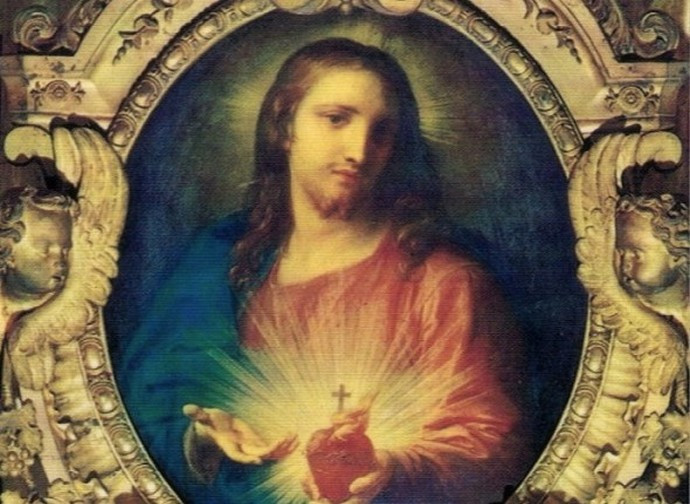 On 27 December 1673, on the feast day of St. John the Evangelist (the apostle who at the Last Supper laid his head on the breast of Our Lord to know who would betray Him), St. Margaret Mary Alacoque (1647-1690) had the first great revelation about the secrets of the Sacred Heart of Jesus, which filled her with His divine presence while the Visitandine (Visitation) nun was gathered in Eucharistic adoration. After letting her rest on His chest, Jesus said to her: “My divine Heart is so passionate with love for mankind and for you in particular, that it can no longer contain within itself the flames of its ardent Love, so that it feels the need to spread them through you and to manifest itself to everyone to enrich them with the precious treasures that I will reveal to you and that contain the graces needed for holiness and salvation, necessary to draw them back from the precipice of perdition”.

The Sacred Heart appeared to her like an incandescent furnace, in which Margaret's heart was immersed and set on fire by Jesus. The Lord left a pain in her side as a tangible sign that everything she had experienced was real. In a second great revelation he presented himself to her shining with glory “with His five wounds blazing like five suns”. He revealed to her the magnitude of His Love for all peoples and His pain in seeing Himself reciprocated with ingratitude and indifference. In reparation for the offenses and sins, Jesus asked Margaret to take Communion whenever the priest would allow her to do so, especially on the first Friday of each month. He also asked her to pray, prostrating herself with her face to the ground, every Thursday evening from eleven o'clock to midnight, telling her that at that hour He would let her participate in the mortal sadness He experienced in Gethsemane.

Through the French mystic, the Lord therefore established the devotions of the Holy Hour and the Communion of Reparation on the nine first Fridays of the month. This last practice is linked to the “Great Promise” on eternal salvation: the faithful who for nine consecutive months, every first Friday, take Communion in a state of grace will certainly die in the grace of God because, as Jesus promised, “My Heart will be a safe haven in that supreme moment”. In another revelation Jesus told Margaret that among the many sacrileges and the indifference “what I find most disappointing is that there are hearts consecrated to me that treat me in this way” and He communicated to her the desire for a new feast: “I ask that the first Friday after the Octave of the Holy Sacrament [Corpus Christi] be dedicated to a special feast to honour my Heart, receiving Holy Communion on that day and making an honourable penance to make reparation for all the outrages received during the period in which it was exposed on the altars. I promise you that my Heart will expand to pour out with abundance the riches of its divine Love on those who will give it this honour and procure others to do the same”.

Margaret, who was not believed by many, was then able to spread devotion to the Sacred Heart thanks to the help of the Jesuit Saint Claude de la Colombière, who became her spiritual guide. Jesus also entrusted Saint Margaret with the mission of asking Louis XIV to consecrate France to His Sacred Heart and to represent it on the banners of the kingdom: but the king did not comply with the request, received in 1689, exactly one hundred years before the beginning of the French Revolution. The veneration of the Sacred Heart - which reveals the true face of Love, ready to sacrifice and die on the cross - also received the strong aversion of the Jansenist heretics, but despite this it spread from one place of Christianity to another. In 1794, with the Bull Auctorem Fidei, Pius VI refuted once and for all the opponents of the Sacred Heart, reaffirming that it is to this that the cult of latria (that is, worship due only to God) is owed, because in worshipping the Heart of Jesus, a sign of His sacred humanity, the faithful adore “the Incarnate Word with His own Flesh”, in its perfect union of true God and true man.

It was finally Blessed Pius IX, in 1856, who extended the liturgical solemnity to the whole Church. In the following years the acts of consecration to the Sacred Heart of Jesus for families and nations spread. The first country to be consecrated was Ecuador in 1874, thanks to its president Gabriel Garcia Moreno, later killed by freemasons. The act of Consecration reminds us of the need to recognize Christ in our hearts and in our own public life as well as in that of Nations.

At least a mention should be made of the main precursors of the cult of the Sacred Heart, such as the three German saints and mystics who lived in the 13th century in the monastery of Helfta - that is, Matilda of Magdeburg, Matilda of Hackeborn and Gertrude the Great - and Saint John Eudes (1601-1680), who could be proclaimed a Doctor of the Church for his teachings on the mystical unity between the Sacred Heart of Jesus and the Immaculate Heart of Mary: “You must never separate what God has so perfectly united. Jesus and Mary are so intimately linked to each other that whoever sees Jesus looks at Mary; whoever loves Jesus loves Mary; whoever has devotion for Jesus has devotion for Mary”.

The practice of the nine first Fridays of the month