Pro-vax Catholic media being paid by Soros and Gates

The consortium of Catholic media, catholic-factchecking.com, led by Aleteia and linked to the Holy See, is a project to silence non-aligned Catholic journalists. It is financed by large international anti-life and anti-family lobbies, in cahoots with the big pharmaceutical companies that produce vaccines. This explains a lot.... 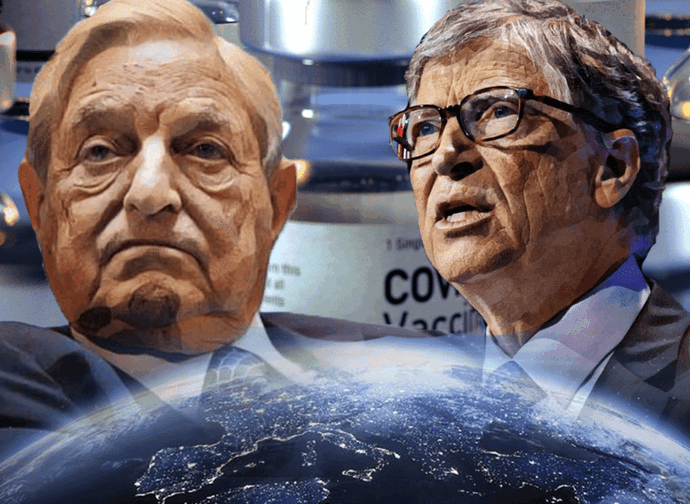 A well-documented investigation by the American website Church Militant reveals how Google, Soros, and Bill Gates finance the Catholic pro-vax media to oppose those in the Church who are not aligned with the pro-vax message. And it turns out that leading the consortium of Catholic media that call themselves fact-checkers (i.e. who check the veracity of the news, in this case on anti-Covid vaccines) is the website Aleteia, published in seven languages, which enjoys a close collaboration with the Vatican Department of Communication as well as the Pontifical Council for the New Evangelization.

The consortium, which includes some thirty publications, has been active for a few months and is looking for new recruits through its website catholic-factchecking.com (which is termed "International Catholic Media Consortium on Covid-19 vaccines"). And the consortium is one of the eleven projects (out of 309 competitors from 74 countries) to have shared the 3 million dollars made available by the Google News Initiative through the Covid-19 Vaccine Counter-Misinformation Open Fund.

In short, Google is worried about those who question the narrative according to which the vaccine is the only salvation of mankind, and is deploying all its power to systematically counter the enemy. Given that Google is the world's leading search engine, this alone should give rise to some concern. Concern that should turn into apprehension when we learn that as of 2019 Google's “sister-company” (an emanation of the same company Alphabet), Verily, which deals with health, has a “strategic alliance” with large pharmaceutical companies, including Pfizer. Moreover, Verily is currently a partner of Pfizer and of the Duke Clinic Research Center in the study of the long-term safety of Covid vaccines.

Curiously, no one suspects that there is any conflict of interest. As far as Catholics are concerned, the fact that Google openly promotes reproductive rights (contraception and abortion) and the LGBT agenda should give rise to some misgivings... But evidently pecunia non olet, and when faced with the need to crush any resistance to vaccines among Catholics, one cannot be too subtle. After all, Aleteia has had a consolidated partnership with Google since 2013. But that's not all: in order to qualify for funds from the Google News Initiative, catholicfactchecking.com is advised by a Spanish research institute, the Instituto de Salud Global (ISGlobal) in Barcelona, which in turn has received $57 million from the Bill and Melinda Gates Foundation and $150 thousand from George Soros' Open Society Foundation, according to Church Militant.
In addition to having direct interests in the vaccination campaign (especially Gates), Church Militant rightly points out that both these foundations not more than six months ago sponsored the report “Tip of the Iceberg", aimed at discrediting European pro-life movements, including the COMECE (the Commission of the Bishops' Conferences of the European Union).

But there is another aspect that is disturbing to say the least: in the scientific Committee organised by catholicfactchecking.com we actually find three members of the Pontifical Academy for Life, including its Chancellor, Monsignor Renzo Pegoraro. The other two are Rodrigo Guerra Lopez and Father Alberto Carrara. Father Alberto Carrara shows us how these minions move to neutralise anyone who steps out of line, branding an article by National Catholic Register journalist Edward Pentin as fake news.

Pentin had written an article criticising the open support of the Pontifical Academy for Life for vaccinating children despite the proven risks, and to validate it he had published a detailed list of 48 cases of American children who died after being inoculated with the Pfizer vaccine, a list that can be found in the database of adverse events linked to vaccination (Vaers). "As a member of the scientific commission of catholic-factchecking.com," tweeted Father Carrara, "I’m on the same line as Annamaria Staiano, president of the Italian Society of Pediatrics: "All pediatric scientific communities are in favor of vaccination against #Covid in the age group 5-11 years". So, no line of reasoning, just an act of faith in vaccines and the label of ‘fake news’ for articles that instead are well documented.

Summing up: there is a group of Catholic media, linked to the Holy See, who are part of a project to silence non-aligned Catholic journalists, funded by large international lobbies against life and the family, in cahoots with the big pharmaceutical companies that produce vaccines. What shall we call it? Conflict of interest? Fraud? Treason? Shame? Scandal? Take your pick.

If nothing else, this gives us an insight into why the official Catholic media, and above all the Pontifical Academy for Life, are so keen to support mass vaccination and pretend that the Church has spoken out for vaccines with no ifs and no buts, even though the document published by the Congregation for the Doctrine of the Faith a year ago said something quite different, as we have repeatedly pointed out.