Vaccines and abortion, how Church teaching is being mystified

In newspapers and on TV it has become fashionable to deride and demonise Catholics who refuse to be vaccinated, while several bishops and priests are adamant that the Church is calling for compulsory vaccination. But the document of the Congregation for the Doctrine of the Faith places very clear conditions on the moral legitimacy of the use of these vaccines, including pressure on pharmaceutical companies and governments to ban the use of cell lines from aborted foetuses. On this point, however, the silence of the bishops is deafening. 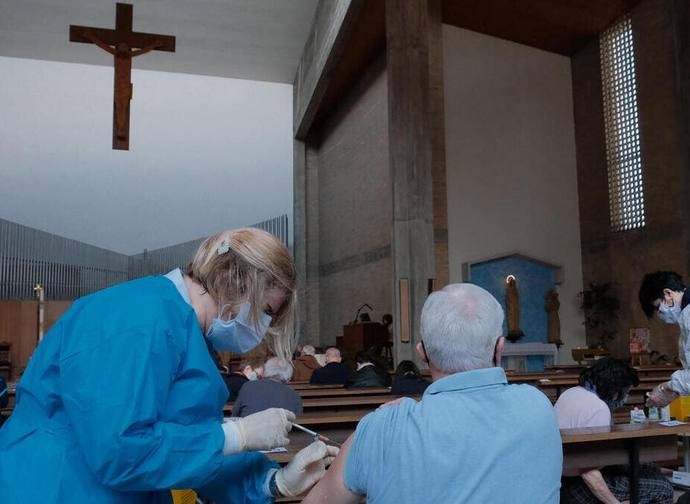 For some time now, there is no newspaper, magazine or TV news programme that does not publish a report on so-called no vax Catholics with trite descriptions of eccentrics, bishops and priests portrayed as comic characters on the edges if not outside the Church. Obviously everything is linked to the imaginary enemies of Pope Francis. There is also the usual authoritative ecclesiastical figure who explains how the Church has already pronounced on these anti-Covid vaccines, clearly stating that they can, or rather must, be used without any moral or health problems. The reference is to the famous Note of the Congregation for the Doctrine of the Faith (CDF) on the morality of the use of certain anti-Covid 19 vaccines, published on 21 December 2020, with the countersignature of Pope Francis.

Now, apart from this definition of No Vax, which - as we have said many times - is an odious attempt to immediately disqualify anyone who questions the use of these vaccines, one has to wonder whether those who talk so much about this Note, attributing to it a full and definitive authorisation to vaccines that use cell lines from aborted foetuses, have ever really read and understood it.

In fact, it is a brief document, the wording of which is open to objection, but it certainly does not say that these vaccines do not present any problem. To begin with, the Congregation limits the scope of its intervention exclusively to the moral issue linked to the use of cell lines "originating from aborted foetuses". On the other hand, “it is not intended to judge the safety and efficacy of these vaccines, although ethically relevant and necessary, the evaluation of which is the responsibility of biomedical researchers and drug agencies”. In other words, it is also important to make a moral judgement on the safety and efficacy of the vaccines: at the time the note was published, vaccination was just beginning and the end of the pandemic was vaunted as certain with the two planned doses, whose efficacy was sold as close to 100%. A year later we know this is not the case, that its effectiveness is limited in time, and that serious adverse reactions are also a problem, however much the official information tries to hide the data. It is precisely this Note, therefore, that would require serious ethical reflection on the safety and efficacy of these vaccines.

But let us return to the subject of the Congregation's intervention. First of all, it refers to previous documents on this subject, especially the "pronouncement of the Pontifical Academy for Life, entitled ‘Moral reflections on vaccines prepared from cells taken from aborted human foetuses’ (5 June 2005)". To summarise, the moral legitimacy of these vaccines is based on two conditions: the state of necessity and the lack of "ethically irreproachable" alternatives. With regard to the first condition, it should be noted that although the patient's use of these vaccines constitutes remote passive material cooperation, the “moral duty to avoid” these vaccines remains valid unless there is “a grave danger such as the otherwise uncontainable spread of a serious pathogen”'. And here we come back to the need to check this condition in the light of what has happened in this year of vaccinations.

But let us admit - without conceding it - that the two conditions for the licit use of these vaccines are met (after all, we have addressed these issues several times in recent months). Here we are interested in highlighting two other aspects that emerge from the Note.

The first is the statement that "vaccination is not, as a rule, a moral obligation and must therefore be voluntary". It is not a moral obligation, and even less so can it be a legal obligation. And yet, many of those who pontificate these days, setting themselves up as exclusive representatives of the Church, are even pushing for a legal obligation; and there are now many cases of bishops forcing priests and seminarians to be vaccinated. Where, then, is the ideology found? Is it among those who raise moral problems as well as concerns about safety and efficacy, or among those who bend the documents of the Church to their own use and ends to make them superimposable on the indications of the government?

Not only that, but the CDF Note indirectly recognises the possibility of conscientious objection by recommending to those who for this reason refuse the vaccine to do their utmost to avoid "any risk to the health of those who cannot be vaccinated for clinical or other reasons, and who are the most vulnerable". Note here how the CDF assumes as true the promise that the vaccine is totally effective, so much so that it does not consider any risk of contagion for those vaccinated.

Second issue: the need to stop the use of these cell lines. The CDF is first concerned to clarify that “the licit use of such vaccines does not and must not in any way imply moral approval of the use of cell lines from aborted foetuses”. The CDF then asks “both pharmaceutical companies and government health agencies to produce, approve, distribute and offer ethically acceptable vaccines that do not create issues of conscience either for health workers or for the vaccinees themselves”. In practice, the CDF is calling for pressure on pharmaceutical companies and governments to ban the use of the cell lines under discussion. The example of the animal rights activists shows that even a well-organised and motivated minority can achieve important results on this front (see the campaigns to abolish drug testing on animals).

But on this point there is a deafening silence, as if the subject is taboo. Vaccination is constantly being pushed, everything is done - even in the Church, perhaps even more so in the Church - to make life difficult for the unvaccinated, but not a single word is spoken to prevent vaccines, various drugs, and scientific research from being bolstered by the use of aborted foetuses. There are even those who dare to preach about defending life to those who are pro-life who do not get vaccinated, and then remain silent on this aspect that the CDF considers fundamental, an additional condition for the use of morally problematic vaccines. The Italian Bishops' Conference (CEI), for example, had an important opportunity to launch an appeal in this sense and force even government leadership to take a position: the message for the Day for Life, published recently, carried the title "Custodire ogni vita" (Guard every life). Instead, although a large part of the message was dedicated to the pandemic, the CEI preferred to be talked about for the passage in which it condemns those who choose not to be vaccinated; but no mention was made of the lives used for scientific research and in particular in the pharmaceutical field. Perhaps, fogged by this vaccinist madness, they have not even thought about it; or they have calculated that it was more convenient not to disturb those pulling the strings, perhaps concerned they might lose lucrative state tax contributions. Sooner or later they will discover, that you reap what you sow.