Presentation of the Blessed Virgin Mary

With the liturgical memorial of the Presentation of the Blessed Virgin Mary, the Catholic Church commemorates the presentation of Mary as a child in the temple in Jerusalem, celebrated on the same day by the Orthodox under the title “Entrance of the Mother of God into the Temple”. 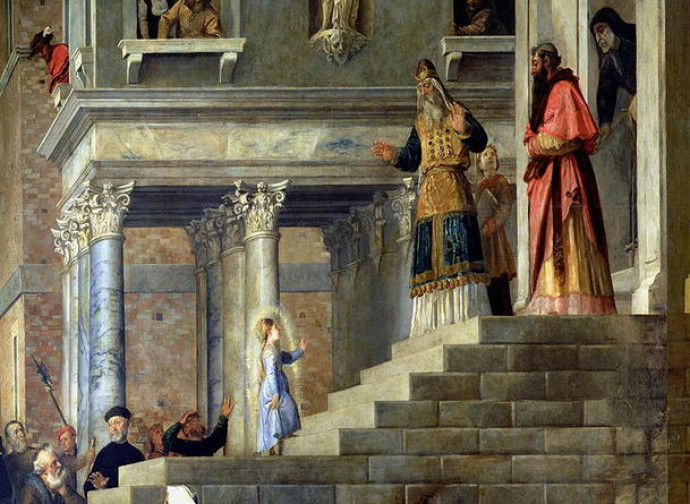 With the liturgical memorial of the Presentation of the Blessed Virgin Mary, the Catholic Church commemorates the presentation of Mary as a child in the temple in Jerusalem, celebrated on the same day by the Orthodox under the title “Entrance of the Mother of God into the Temple”.

The commemoration has its origins in the consecration in 543, in Jerusalem, of the Basilica of Santa Maria Nuova, built at the behest of Justinian I. Only later, however, was the true Feast of the Presentation born, of which there is a first trace in the calendar of the Byzantine Emperor Basil II ‘the Bulgar Slayer’ (958-1025). Through the influence of the East the celebration spread to the West from 1372, when Gregory XI included it in the calendar of the Roman Curia. The Pope had been persuaded by the ambassador to Cyprus, Philip of Mézières, who told him how the Orthodox celebrated the event with great solemnity. In the following centuries the Presentation became established throughout the Catholic Church as a feast, apart from a temporary suppression in the 16th century. The reform of the liturgical calendar in 1969 reduced its liturgical rank to a memorial.

This mystery of Mary's life is not mentioned in the Gospels, but appears for the first time in the apocryphal Protoevangelium of James, written around the middle of the second century. Of this text the Christian tradition has accepted some contents related to the life of the Blessed Virgin and her parents, Saints Anne and Joachim, while it has rejected as uninspired other narratives far from the dry and sober style of the four evangelists. According to the story of the Protoevangelium, Our Lady was presented by her parents at the temple in Jerusalem at the age of one year and was brought back at three years to be raised there, receiving the priest's blessing.

The event of the offering of the young child Mary to God has prompted reflections by Christian authors, such as St Germanus of Constantinople (634-733), who in a homily on today's celebration said: “Today the door of the divine temple, wide open, receives the sealed door of the Emmanuel who enters facing East”.

There are several congregations entitled to the Presentation of Mary and the Venerable Mary of Agreda in the Mystical City of God also speaks extensively about it (chapter 1, book 2). The Spanish nun underlines the difference between the solemn processions of the ancient Ark and “the true living Ark of the covenant”, and the humility with which Anne and Joachim led Mary to the temple: “God wanted all the glory and majesty of this procession to be invisible and divine, because the mysteries of Mary Most Holy were so sublime and hidden that even today many of them continue to be so, according to the inscrutable judgments of the Lord, who established the appropriate time for everything”.