Pelosi’s Communion in the Vatican undermines US bishops

The Speaker of the House visited the Vatican and received Holy Communion during the papal Mass, in open defiance of Bishop Cordileone, who had personally forbidden her Communion for her open support of abortion. 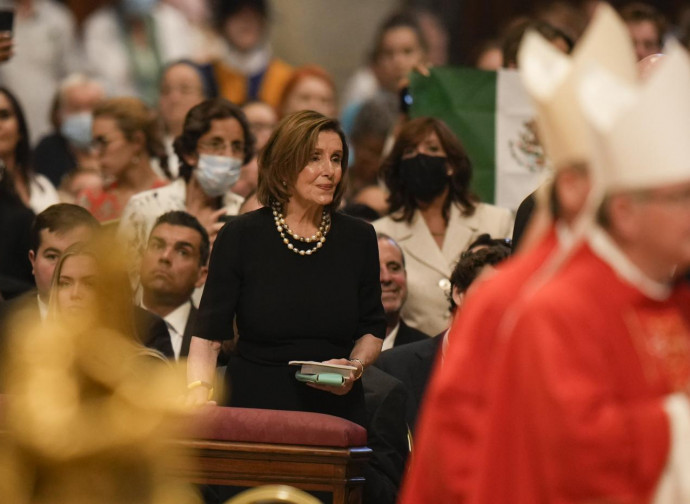 In the New York Times editorial published on 29 June, signed by Calla Hales, it was stated without any restraint that abortion is not only a ‘family value’ in itself but also that reproductive choice is a moral good, and a 'religious law'. Well, the best interpreter of this new pagan religion, which wants to affirm the free and unconditional murder of the innocent as an absolute right and compatible with Christianity, even more so with Catholicism, is Nancy Pelosi’s ‘visit’ yesterday to the Vatican.

Perhaps an impulsive visit, accompanied by her husband: she attended Mass in St Peter's, officiated (at least partly) by the Holy Father and received Holy Communion, before visiting the Community of Sant'Egidio. Obviously, despite the botched attempts to draw attention to the visit to Sant Egidio, which is inextricably linked to the newly appointed President of the Italian Bishops' Conference and Cardinal of Bologna Matteo Maria Zuppi and the President of the Pontifical Academy of Life Monsignor Vincenzo Paglia, the entire world press, and especially the US press, has relaunched the photo showing Pelosi and her husband approaching Pope Francis, with headlines on the Holy Communion the US Congress President received.

Thinking ill is a sin, but that doesn’t mean that the thought might not be on target. Therefore, we trust that Nancy Pelosi’s visit or meeting, albeit fleeting, with the Holy Father may have served to convert her and make her aware of the grave sin she has been committing for years, in the words of Bishop Joseph Cordileone, who was left with no choice, on 20 May, but to ban and banish her from receiving the Holy Eucharist. We are certain that, as well known as the excommunication, shared by many American bishops and published by the most important international newspapers, it is impossible that Nancy Pelosi could have received the Holy Eucharist without first having confessed and received full and complete remission of her sins.

We don’t want to judge anyone. Only God knows what’s in hearts, and how much good may have done by Pelosi’s visit to Sant'Egidio, whose authoritative ecclesiastical friends have never hitherto contested the value and dignity of nascent life, the protection of the embryo, and pro-motherhood and pro-family policies.

However, refraining from such temptation, it is necessary to reflect for a moment on the objective provocation and serious discomfiture caused by Ms Pelosi's presence in the Vatican, her reception of the Holy Eucharist, her later (or earlier?) visit to Sant'Egidio, which became public knowledge hours later and which the international newspapers did not even report.

Since September 2021, Ms Pelosi has been working, and so far and thank God has failed, to get a law passed to federalise and codify the Roe Judgment, i.e. the constitutional right to abortion, declared non-existent by the Supreme Court last week. More recently, a few days after Archbishop Cordileone's decision, Pelosi herself had snootily criticised him in an interview with CNN, the purpose of which was to reaffirm her belief in being perfectly Catholic and in good conscience a fierce promoter of abortion.

Obviously it is only a coincidence that the Pope, on 29 May, only a few days after Msgr Cordileone's painful decision, declared his intention to create Cardinal the Archbishop of San Diego Robert McElroy, who, on the other hand, has never denied Communion to anyone, nor asked in advance for repentance for public and serious sins. Pelosi is that high representative of American institutions who said she was very proud to have taken part in a 'drag queens' show in front of young and innocent children who were cheerfully administered LGBTI ideology, and after a few days, on 18 June, reiterated with Vice President Kamala Harris that there is no contradiction between being deeply religious and faithful to the dogmas of faith and promoting abortion.

On the very day of the Supreme Court ruling that returned to the states and their citizens the right to protect the conceived child or restrict and abolish abortion, Pelosi told Democratic party members that "the Supreme Court has inflicted a devastation on our nation by erasing the fundamental right of women to make their own reproductive health decisions”. In the following days, on 27 June, in a letter to all members of Congress, Speaker Nancy Pelosi outlined several abortion bills that House Democrats will introduce before the upcoming November elections.

These include another version of the Women's Health Protection Act, to create a federal right to abortion that would eliminate state powers and other measures to protect the right to travel out of state for abortions, and a privacy bill that would prevent prosecutors in pro-life states from accessing data stored in reproductive health apps to enforce abortion restrictions. This letter could not have escaped the radars of the Vatican or of Sant'Egidio, and has been hailed by the Washington Post as “the right idea on abortion, which the Senate must follow”.

So could Nancy Pelosi and her husband have been banned from attending Mass on the Feast of St Peter and St Paul at the Vatican? Of course not! Could she have been forbidden to visit or cross paths, if this happened, with the Holy Father? No. Certainly, unless she had suddenly converted and done penance in the preceding hours, she should have been prevented from receiving the most holy Body of Christ. As for the news of the visit to Sant'Egidio to visit Afghan and Ukrainian refugees, speaking frankly, ‘the remedy was worse than the disease': Pelosi represents the country that fled Afghanistan leaving women and children in the hands of the Taliban; she was in Ukraine and Poland on 2 and 3 May... in good faith as always, but don't treat us as fools. Those who love the Pope must avoid nonsense and provocations that contradict the Magisterium of the Holy Church.