Challenged by the Democratic leader on support for abortion and the right to Communion, the Archbishop of San Francisco did what every bishop should do in similar circumstances: he has forbidden Pelosi from receiving the Eucharist. Obviously Cordileone will be much criticised for this both by politicians and within the Church, but his letter of explanation is also unexceptionable from a pastoral point of view. 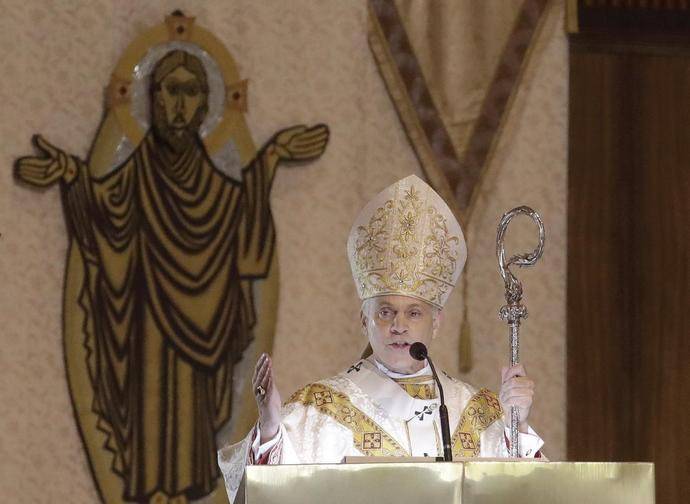 A decision of great courage and genuine pastoral charity. The letter addressed by the Archbishop of San Francisco to House Speaker Nancy Pelosi, made public on 20 May, will be interpreted as a political act, as interference by the Church in the current delicate moment awaiting the Supreme Court's decision on the 'right' to abortion, as an expression of judgement without mercy. In reality, it is to all intents and purposes an act that was due; an adjective that does not want to minimise Msgr Cordileone's choice at all, but to emphasise the merit of the pastor who does what he must for the custody of the sanctity of the Sacraments, the protection of the people entrusted to him, and the reprimand of sinners.

This is not a return to the Middle Ages, according to the negative emphasis given to this expression, but the application of a precise rule of current Canon Law, despite the fact that the majority of pastors pretend that such a rule does not exist, to the great detriment of the faithful.

Pelosi's 'pro-choice' positions are well known. Time and again (see here) she has paraded herself as a Catholic, a mother of five, in her own words devout and practising, to support the 'free choice' of women - and no one else - to terminate or continue a pregnancy. Recently, the American Dem leader had also become the initiator of the request to Congress to codify the 1973 Supreme Court decision Roe v. Wade into law. Since this new initiative of Pelosi's, Cordileone had tried several times to meet with her personally, as he writes in his letter to her, but without any sign of willingness on her part.

The straw that broke the camel's back was an excerpt from her 4 March statement to The Seattle Times, quoted verbatim by the Archbishop in his open letter to all the faithful of his diocese: “The very idea that they would be telling women the size, timing or whatever of their family, the personal nature of this is so appalling, and I say that as a devout Catholic”, Pelosi said. “They say to me, ‘Nancy Pelosi thinks she knows more about having babies than the pope.’ Yes I do. Are you stupid?”
Hence the decision to send her a letter on 7 April informing her that, "if she does not publicly disavow her support for the 'right' to abortion and refrain from referring in public to her Catholic faith and from receiving Holy Communion, I will have no choice but to make a declaration, in accordance with Canon 915, that she is not to be admitted to Holy Communion”.

Nancy Pelosi has not only failed to dignify the Archbishop with any response, but recently, on 15 May, in an interview with CNN's Dana Bash, she challenged him somewhat, reiterating that “as a practicing, devout Catholic: five children in six years and one week.  I don't disrespect people's views and how they want to live their lives.  But I don't think that it's up to the Donald Trump appointees on the Court or any politicians to make that decision for women. And I just do – I will just say what I have been saying for decades.  Understand this.  This is not just about terminating a pregnancy.  This is about contraception, family planning”.

Hence Cordileone's decision to make his letter of 7 April public to explain to all the faithful that “after numerous attempts to speak with you to help you understand the grave evil you are perpetrating, the scandal you are causing and the danger you are in for your very soul, I have decided that the time has come to declare publicly that you will not be admitted to Holy Communion unless and until you publicly repudiate your support for the 'rights' of abortion, go to Confession, and receive absolution for your cooperation in this evil in the Sacrament of Penance".

It is not Cordileone's intention to end the matter in this way, since in his letter to Pelosi he made it clear that he was “ready to continue our dialogue at any time” and that he would continue to offer prayers and fasting for her.

Also on 20 May, Archbishop Cordileone sent a letter to the clergy of his diocese (see here), to further explain his act and ward off any attempt at ideological interpretation: “There are those who speak of such actions as I am taking as ‘weaponising’ the Eucharist.  However, this is simply application of Church teaching.  One would have to demonstrate that a person’s actions in following Church teaching is explicitly for a political purpose in order to justify the accusation of ‘weaponising’ the Eucharist. I have been very clear all along, in both my words and my actions, that my motive is pastoral, not political.” He added “that one can also violate Church teaching and take Holy Communion for a political purpose as well, thus ‘weaponising’ the Eucharist for one’s own ulterior motives”.

The Archbishop of San Francisco has therefore done his duty to the full, following very carefully what the Church has to say on the matter. In the Jubilee year, the Pontifical Council for Legislative Texts published a precise explanation of the application of Canon 915. The three conditions foreseen for the denial of Holy Communion, in Nancy Pelosi's case, all concur very clearly: objective grave sin; obstinate perseverance, explained by the 2000 document as "the existence of an objective situation of sin that lasts over time and which the will of the faithful does not put an end to, other requirements (attitude of defiance, prior admonition, etc.) not being necessary for the situation to occur in its fundamental ecclesial gravity"; the fact that such grave sin is manifest.

In the case in question, although he was not obliged to do so, Cordileone also prudently sent a prior admonition to Pelosi, repeatedly attempting to make personal contact, but in return he received unequivocal manifestations of obstinacy, which in fact amounted to a clear attitude of defiance. The archbishop also noted the recommendation to "endeavour to explain to the faithful concerned the true ecclesial meaning of the rule, so that they can understand or at least respect it", before arriving at a decision. It is inevitable that Cordileone will end up in the crosshairs of political and ecclesial reactions. Whatever happens, he has done his duty as a true pastor who has the good of the Church and souls at heart, thus giving an example of fortitude and rectitude, which at this time are truly a limpid light that pierces the veil of darkness.