Palm Sunday marks the beginning of Holy Week, as we are reminded in the admonition preceding the liturgy and introducing the procession: “Jesus enters Jerusalem to fulfill the mystery of death and Resurrection”. 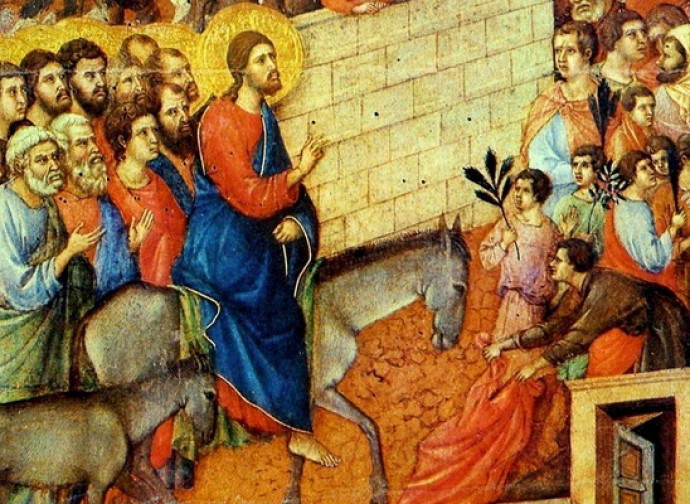 Palm Sunday marks the beginning of Holy Week, as we are reminded in the admonition preceding the liturgy and introducing the procession: “Jesus enters Jerusalem to fulfill the mystery of death and Resurrection”. These words already allow us to enter into the heart of the celebration, which has as its starting point the memory of the messianic entry of Christ into Jerusalem. The King of all centuries and Our Lord entering the Holy City on the back of a very humble donkey, thus fulfilling Zechariah's prophecy: “Exult greatly, daughter of Zion, rejoice, daughter of Jerusalem! Behold, your king comes to you. He is righteous and victorious, humble, riding a donkey, a colt foal of an ass” (Zc 9, 9).

The branches and cloaks that the crowd laid out on the road are the sign of a people acclaiming their king, without however imagining that the kingship of Christ would find its fulfillment on Calvary. It is the logic of God, so surprising and scandalous for the world, it is the mystery of the cross that is already contained in what for human logic has the appearance of an oxymoron: the King on a donkey. A King to whom the children sing “Hosanna to the Son of David”, which disconcerts those who hold some form of earthly power (“can you hear what they say?” the outraged scribes and high priests ask in disbelief). Jesus then recalls the need to make oneself small in order to enter the Kingdom of Heaven, recalling Psalm 8: “Yes, have you never read: From the mouths of children and infants you have received praise”?

That is why the culmination of today's liturgy can only be the Passion. All the readings show the moving link between the Old and the New Covenant that is realized in Christ, the divine Word who loves each one of us. And therefore He has come down to us in order to keep the promises of salvation, that is, liberation from sin and slavery to which Satan subjects us with his deceptions. Only Christ is the answer to evil; victory over death and eternal glory are achieved only through His cross, which every Christian is called to bear. For good reason the liturgy of the Word opens with another prophecy fulfilled, taking up a Christological passage from Isaiah, known as the Third Song of the Servant: “I presented my back to the scourgers, my cheeks to those who plucked my beard, I did not hide my face from insults and spitting” (Is 50:6). The Servant sung by Isaiah is the prefiguration of Jesus, suffering and obedient in all things to the Father's will, to atone for our sins and realize the salvific plan.

The procession preceding the liturgy has been documented in Jerusalem since the fourth century, and soon spread to other centers of Christianity such as Syria and Egypt. Over time, the procession grew in importance, enriched with sacred hymns and the ritual blessing of palm trees, attested since the seventh century. A famous hymnographer and theologian active during this period, St. Andrew of Crete (c. 650-740), wrote on Palm Sunday: “Let us too run with him who hastens to the Passion, and imitate those who came to meet Him. Not, however, to lay before Him along His path olive branches or palm trees, carpets and other such things, but as if to lay ourselves in humble prostration and in deep adoration before His feet. [...] Waving the spiritual branches of our soul, every day we too, together with the children, acclaim devoutly: Blessed is He who comes in the name of the Lord, the King of Israel”.