Fides omnium christianorum in Trinitate consistit, “the faith of all Christians rests on the Trinity”, Saint Augustine taught about the greatest mystery that exists. 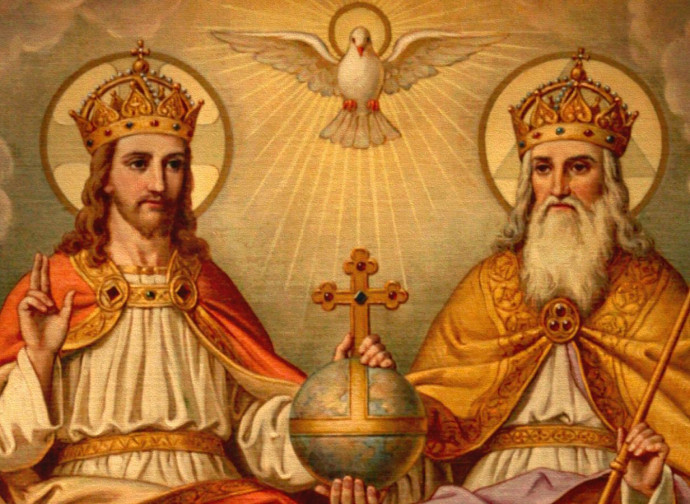 Fides omnium christianorum in Trinitate consistit, “the faith of all Christians rests on the Trinity”, Saint Augustine taught about the greatest mystery that exists. A mystery professed by us every time we make the sign of the cross and contained in the formula of Baptism which Jesus himself taught the apostles with a solemn command: “Go therefore and teach all nations, baptising them in the name of the Father and of the Son and of the Holy Spirit” (Mt 28:19). The term “Trinity” to express the union of the three divine Persons appears for the first time in the writings of Saint Theophilus of Antioch (c. 120-185) and then of Tertullian. But among the authors of the first centuries of Christianity it was Saint Augustine (354-430) who most sought to deepen the Trinitarian mystery.

The tradition, taken from a vast iconography, reports that while Augustine was walking along the coast of Lazio, meditating on the Trinity, he saw a young boy repeatedly drawing sea water with his hand and pouring it into a small hole on the beach. Asked to explain this strange action, the boy answered that he wanted to pour all the sea water into the hole. “But that's impossible!”, Augustine told him. The boy replied: “It's easier for me to pour all the sea water into this little hole than for you to explain the inscrutable mystery of the Most Holy Trinity”. That said, the angel disappeared.

In his masterpiece on Trinitarian doctrine, the De Trinitate, Augustine, in order to define the relationship of love within the Father, the Son and the Holy Spirit, wrote: “There are no more than three divine persons: the first who loves the one who is born, the second who loves the one from whom he is born and the third who is love”. Then he added: “Here are the three: the Lover, the Beloved and the Love”. In another of his writings, the bishop of Hippo used another beautiful image, in this case addressed to each soul and to the choice that will determine its eternal destiny: “Each one is what he loves. Do you love the earth? You will be earth. Do you love God? What should I say? That you will be God? I daren't say it on my own. Let us rather listen to the Scriptures: I have said: you are gods, and all of you are children of the Most High [cf. Ps 82:6; Jn 10:34]. If, then, you want to be gods and children of the Most High, do not love the world, nor the things that are in the world”.

Before and after the work of the Bishop of Hippo, the Church has always tried to formulate her Trinitarian faith as clearly as possible, both to defend it against heresies (which are certainly not harmless opinions but deceptions that undermine the very possibility of a righteous knowledge of God on the part of man and thereby jeopardize his salvation, risking distancing him from Him) and precisely to arrive at a better understanding of the Most Holy Trinity, the purpose for which we were created. It is not without reason that the first four ecumenical councils (Nicaea in 325, Constantinople in 381, Ephesus in 431, Chalcedon in 451) are the cornerstones of the true faith, of which the Creed is a very high synthesis.

Already in the Old Testament traces of God's Trinitarian being can be found. An example is the extraordinary divine manifestation to Abraham at the Oaks of Mamre (Genesis 18), where we have the first image of the One and Triune God. But only with the coming of Christ among men in the fullness of time and Pentecost will the faithful begin to have access to this mystery. The Catechism explains: “The intimacy of His Being as Holy Trinity constitutes a mystery inaccessible to reason alone, as well as to the faith of Israel, before the Incarnation of the Son of God and the sending of the Holy Spirit”.

For this reason the Church celebrates the Solemnity of the Most Holy Trinity on the first Sunday after Pentecost (it was John XXII, in 1334, who extended the liturgical feast to the whole Church), the starting point of His saving mission among peoples. A mission that must lead man to God, Love and Truth, our beginning and our end, which made Saint Catherine of Siena say to him: “You, eternal Trinity, are like a deep sea, in which the more I seek and the more I find, the more I thirst to seek you. You are insatiable; and the soul, satiating itself in your abyss, does not satiate itself, because it remains in hunger for You, more and more it yearns for You, O eternal Trinity”.