Lucy, the beauty of being bride of Christ

Lucy suffered martyrdom under Diocletian because of her firm decision to live as a woman consecrated to Christ and therefore not to abjure her faith. Her patronage of the eyes does not stem from the acts of martyrdom, but from the devotion linked to her name (from lux, light). For centuries, her testimony of life has inspired the faithful, artists, and poets. 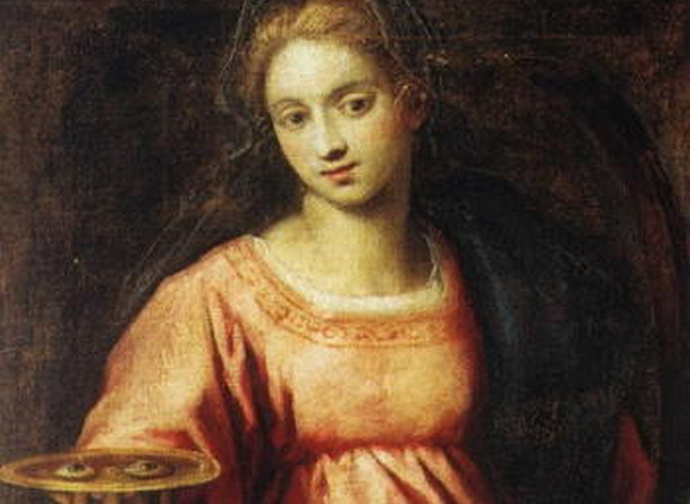 Saint Lucy was another victim of the infamous Diocletian (244-313), the great exterminator of Christians, may God have mercy on him.

Lucy was born around 283 in Syracuse, where she also died in 304. She lived all her life there, in that beautiful Sicilian city, which pays unparalleled homage to her. She is celebrated on 13 December, the date of her death.

Her family was noble, but her father died when she was only five years old. Her mother Eutychia was often ill and spent large sums on treatment, to no avail. Eighteen-year-old Lucy suggested to her mother that they go together to Catania, to the tomb of St Agatha, to ask for intercession for her recovery. The year was 301. That pilgrimage would change her life forever.

During prayer Lucy fell asleep and in her dream she saw Saint Agatha, who spoke to her, advised her, and predicted a future for her as patron saint of Syracuse. In fact, Eutychia recovered and Lucy confirmed her decision to dedicate her life to Christ - she had already consecrated herself in secret - and to distribute her wealth to the poor. But she had not reckoned with her betrothed, chosen by the family since she was a child, who was thus deprived not only of the marriage but also of the dowry that would follow. In revenge, he denounced her as a Christian. The decrees of the persecution of Christians issued by the Emperor Diocletian were in force.

It was the prefect Paschasius who had Lucy put on trial, threatening that if she did not renounce her Christian faith she would be forced to enter a brothel. Lucy did not lose heart and defended herself with strength and courage, stating that the body is only contaminated if the soul consents.

Challenged by her attitude, Paschasius ordered her to be forced, but, as tradition has it, Lucy became miraculously heavy, so much so that neither dozens of men nor the strength of oxen could move her. Accused of witchcraft, Lucy was sprinkled with oil and surrounded by bundles of wood that were set alight, but the flames did not touch her. She was finally brought to her knees and, according to Latin sources, stabbed in the throat (jugulatio) in the year 304, at the age of twenty-one. She died only after receiving Communion and prophesying the fall of Diocletian and peace for the Church.

The acts of Lucy's martyrdom have been found in two ancient and different versions: one in Greek, the oldest text of which dates back to the 5th century (at the present stage of research); the other, in Latin, dates back to the 5-6th century and seems to be a translation of the Greek text. The story that her eyes were plucked out does not appear in the martyrdom acts and dates back to around the 14th-15th centuries (however, this legend has inspired a typical Apulian cake, 'St Lucy's eyes', which are aniseed biscuits in the form of glasses). The emblem of the eyes on cups or plates is more simply linked to popular devotion, which has always invoked her as the patron saint of eyesight because of the etymology of her name, from the Latin lux, light.

A written testimony from the 17th century informs us of a miraculous end to the famine in Sicily in 1646. On Sunday 13 December 1646, a dove (other sources claim it was a quail) was seen circling inside the Cathedral of Syracuse during Mass. When the dove landed on the bishop's throne, a voice announced the arrival in the port of a ship loaded with wheat. The people saw in that ship the answer given by Lucy to the many prayers that had been addressed to her, and because of their great hunger they did not wait to grind it, but consumed it boiled.

The feast of St Lucy is very popular in Sicily, particularly in Syracuse, where she is the patron saint of the city. On 13 December the silver statue of the saint is carried in procession from the cathedral on the island of Ortigia, the oldest part of Syracuse, to the mainland, to the basilica of Santa Lucia al Sepolcro, where it remains until 20 December, when it is taken back to the cathedral amidst lights and fireworks. Throughout Sicily, no bread is eaten on 13 December, but only pulses and vegetables as a sign of penitence. 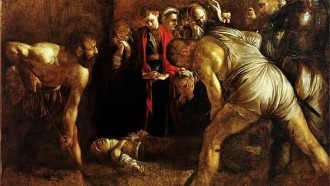 The cult of St Lucy began immediately after the deposition of her body in the catacombs named after her and her tomb became a place of pilgrimage. After the Arab occupation of Sicily, the Syracusans hid the saint's body in a secret place in the catacombs.

According to one version of the story of the relics, the Byzantine general George Maniace, probably by deception, managed to get an old man to point out the body; his name has been kept secret over the centuries to avoid him and his descendants being branded with infamy. And so, in 1039, the general stole the body to pay homage to his sovereign in Constantinople. The body of the saint was taken together with the remains of St Agatha to Constantinople as a gift to the Empress Theodora. But it was also stolen from there in 1204 by the Venetians (the relics of St Agatha had already been brought back to Italy in the previous century) who conquered the Byzantine capital at the end of the Fourth Crusade, and was brought to Venice by Doge Enrico Dandolo as his spoils of war. Once in Venice, the saint's remains were transferred to the island of San Giorgio Maggiore. In 1279, rough seas capsized the boats that were sailing to pay homage to Lucy and some pilgrims died; since then it was decided to move the relics to the Cannaregio district, in the church that was named after the saint. 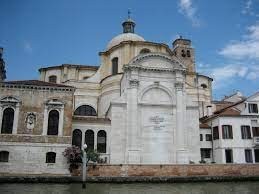 Later, due to the construction of the railway station, the church was demolished in 1861, while on 11 July 1860 the body was definitively transferred to the nearby church of San Geremia (in the photo) where it currently rests, although the people of Syracuse vehemently demand its return to their city. The sacred remains were exceptionally returned to Syracuse for seven days in December 2004 on the occasion of the 17th centenary of her martyrdom. The visit of the remains was welcomed by an incredible crowd of Syracusans and people from all over Sicily. Once the very high number of devotees had been recorded, the possibility of a definitive return was raised. The body of the saint returned again to Syracuse from 14 to 22 December 2014.

A second and parallel tradition, dating back to Sigebert of Gembloux (d. 1112), says that the remains of the saint were taken to Metz in France, where they are still venerated by the French in an altar of a chapel in the church of Saint-Vincent.

The figure of Saint Lucy, over the centuries, has been a source of inspiration not only on a strictly religious and theological level, but also on an artistic and, above all, literary one. She has found her place in both learned literature and popular tradition. She is the patron saint of the blind, ophthalmologists, electricians, and the fight against eye diseases.