A sign of sure hope for all the faithful, with the solemnity of the Immaculate Conception the Church recalls that the Blessed Virgin Mary was kept unscathed by original sin from the first moment of her conception. 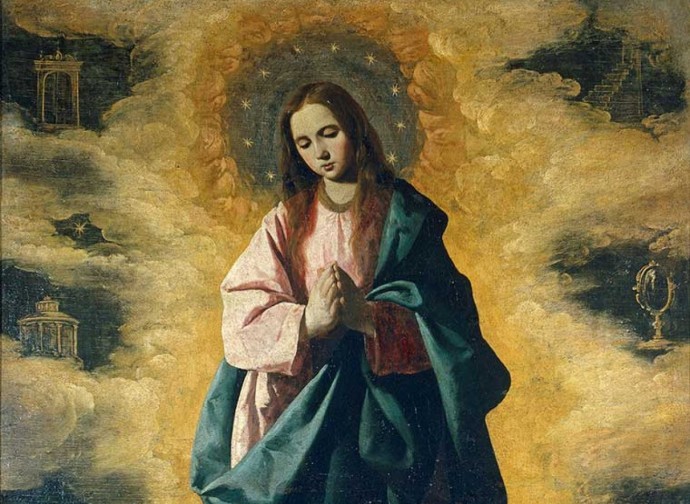 A sign of sure hope for all the faithful, with the solemnity of the Immaculate Conception the Church recalls that the Blessed Virgin Mary was kept unscathed by original sin from the first moment of her conception. This truth of faith, according to which the Mother of the Savior is the first of those redeemed by virtue of the merits of the Son, was solemnly affirmed on December  8 1854 by Pius IX with the apostolic constitution Ineffabilis Deus, which in its culmination states: “[…] by the authority of Jesus Christ our Lord, of the Blessed Apostles Peter and Paul, and by our own: We declare, pronounce, and define that the doctrine which holds that the most Blessed Virgin Mary, in the first instance of her conception, by a singular grace and privilege granted by Almighty God, in view of the merits of Jesus Christ, the Savior of the human race, was preserved free from all stain of original sin, is a doctrine revealed by God and therefore to be believed firmly and constantly by all the faithful.”

In exalting this masterpiece of the Most Holy Trinity, Pius IX writes that the immaculate origins of the Blessed Virgin “had been preordained in the one and identical decree of the Incarnation of Divine Wisdom,” because God willed from eternity that Mary, “full of grace” ( Lk 1:28 ), should be preserved from every trace of sin in order to shelter perfectly in her womb the divine Son made man through the Holy Spirit. This salvific plan that makes Mary the new Eve and mother of the redeemed, simultaneously the fruit of grace and of her complete obedience to the Divine Will, is foretold in Genesis when God (just after the free commission of original sin by our first parents) addresses the infernal serpent and foreshadows the outcome of the eschatological battle: “I will put enmity between you and the woman, between your lineage and her lineage: she shall crush your head, and you shall lie in wait for her heel” (Gen 3:15).

The definition of the dogma came after centuries of disputes and theological insights, because it raised the question of reconciling the Immaculate Conception with the doctrine on original sin and the universality of the Redemption wrought by Christ. Saint Augustine (354-430), writing on the transmission of original sin to all men, had already recognized the special nature of the Blessed Virgin and the fact that “Mary absolutely does not enter into question when we speak of sins.” The Fathers of the Eastern tradition, moreover, from the first centuries of Christianity called Mary “the All-Holy,” glimpsing a reality that would be explained theologically in the West. Here, in the ninth century, the Benedictine saint Paschasius Radbertus explicitly wrote that Mary “was exempt from all original sin,” although the explanation of the reason for this was still a long way off.

The discussion on how to explain the absence of original sin in Mary intensified with scholastic theology, in particular with Saint Anselm of Aosta, who spoke of an early redemption of the Virgin before the birth of Jesus, but still after her conception. After other important scholastic theologians with similar ideas, the turning point came thanks to the work of Blessed John Duns Scotus (1265-1308), who was able to overcome the previous difficulty by reversing the perspective: the immaculate conception of Mary is not an exception to the necessity of the Redemption, but the highest fruit of the same Redemption of Christ, whose merits are such as to have preserved his Mother from original sin. “Christ exercised the most perfect possible degree of mediation in relation to a person for whom he was a mediator. Now, for no person did he exercise a more excellent degree than for Mary [...]. But this would not have happened if he had not merited to preserve her from original sin,” wrote Duns Scotus, who thus explained the bases of what is called the “preserving redemption” of Mary Immaculate, who “is already what the entire Church desires and hopes to be” (John Paul II).

Although the controversies between maculists and immaculists continued for some time, from the second half of the fifteenth century onwards most theologians agreed on the Immaculate Conception; and the magisterium of various pontiffs, while not yet defining the dogma out of prudence, expressed itself favorably on this: the first was Sixtus IV in 1483, followed by Paul V, Gregory XV and Alexander VII. Sixtus IV himself introduced the liturgical feast of the Conception in Rome, already celebrated in the East and in other places of Christianity, and Clement XI made it universal in 1708, when the altars dedicated to the Immaculate could no longer be counted. Immaculist piety was then reinvigorated with the 1830 apparitions in Rue du Bac, where Saint Catherine Labouré saw around the Virgin the words “O Mary, conceived without sin, pray for us who have recourse to You,” which was printed on millions of copies of that medal soon called “miraculous” by the people.

When Pius IX rose to the throne of Peter, the theological picture was therefore clear. Before proceeding to the formal definition of the dogma, the Holy Father, who had received requests from several sides, wrote in 1849 the encyclical Ubi Primum to get to know the thoughts of the bishops all over the world (who collegially have magisterial value subordinate to that of successor of Peter) and so that they could communicate to him in writing the devotion to the Immaculate Conception among the faithful under their guidance, a sign of the importance of the sensus fidei alongside the Holy Scriptures, the Sacred Tradition and the spread of liturgical worship. Of the 603 bishops consulted, 546 declared themselves in favor of the dogma by sending letters filled with “a most enthusiastic joy, exultation and zeal,” as Pius IX recalled in Ineffabilis Deus, and which confirmed “the extraordinary piety and sentiments” that the clergy and all the faithful fostered for the Immaculate. In 1858, four years after the proclamation of the dogma, in one of the apparitions of Lourdes the Blessed Virgin presented herself thus to Saint Bernadette: “I am the Immaculate Conception.”

One corollary of the dogma of the Immaculate Conception is the lofty dignity of every human being already from the moment of conception, since at that precise moment God gives the one conceived an immortal soul.