How Taiwan, boycotted by the WHO, beat the virus. And without a lockdown

Despite being internationally isolated, unacknowledged and boycotted by the WHO to curry favour with Beijing, Taiwan has managed to prevent the spread of the Covid-19 virus and contain the epidemic more successfully than any other country in the world. Taiwan took countermeasures when China still didn’t admit to the epidemic. As of Today, Taiwanese authorities have registered a mere 6 deaths out of a total population of 23 million without ever forcing the island’s inhabitants (except those infected) to stay at home. In the following interview, Andrea Sing-Ying Lee, the Taiwan (Republic of China) diplomatic representative in Italy, reveals his small democratic nation’s secrets of success in containing the coronavirus. 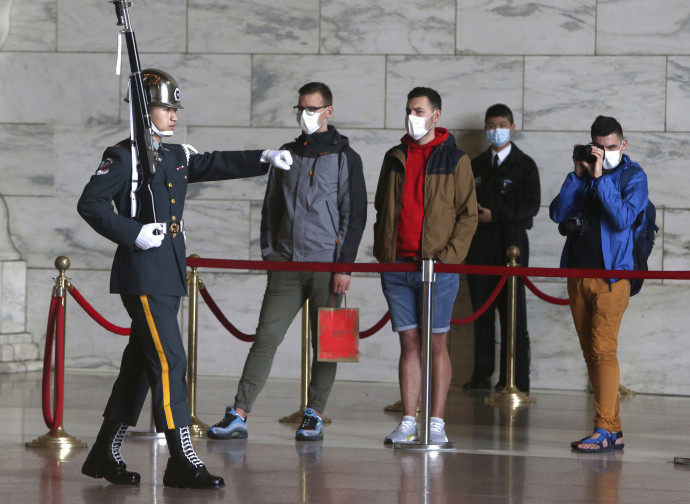 There is a clear promotion of the "Chinese model" in the fight against COVID-19. That very same model, praised time and again by the World Health Organization (WHO), has actually led to the worldwide spread of the "Chinese virus" with over 2.5 million cases currently recorded and more than 170,0000 deaths in 210 countries.

Just visit the official WHO website to confirm that at the beginning of the pandemic the international organization indicated that prohibiting travel to the Asian giant was not advisable, because “there is no clear evidence that the virus passes easily from person to person." This was stated in a January 12, 2020 bulletin which downplayed the situation in the city of Wuhan, the epicentre of the Chinese COVID-19 outbreak.

Instead, Taiwanese government adverted authorities of the risks of widespread contagion well in advance of the pandemic. In a December 31, 2019 email sent to the WHO’s International Health Regulations (IHR), but only published recently by Taipei through a press release, we read:

“News sources today indicate that at least seven cases of atypical pneumonia have been reported in Wuhan, China. Its health officials replied to our media that they do not believe that the cases were linked to SARS. However, if the cases are still being studied, and patients have been isolated for treatment, we would appreciate any relevant information. Thank you very much for your attention to this matter."

The Taiwanese alert was ignored by the WHO and hid the nation’s successful fight against coronavirus. The Daily Compass has spoken exclusively with Andrea Sing-Ying Lee, director of Taipei’s Representative Office of Italy (the diplomatic office in Rome that serves in lieu of a credentialed embassy since Taiwan has no official diplomatic ties with Italy). Sing-Ying Lee said: "It is clear that the WHO will not admit that they ignored our warnings from Taiwan,” stressing that not only is it an advisory organization, but that "it is also a guardian of health worldwide, for which it must assume serious responsibilities. If it had been Japan or England to make the report, things would have been very different. It's a major mistake!".

Meanwhile, the island located 130 kilometres from mainland China, with a population of more than 23 million, has currently registered roughly 425 cases of illness with only 6 deaths. All this without closing down the entire country. The "Taiwanese model" is certainly a success story in dealing with the pandemic, perhaps the best example in the world. Still, Taiwan is not a member of the WHO because of pressure from Beijing, which claims sovereignty over the island which has enjoyed over 70 years of independence.

"We suspect that the WHO ignored Taiwan because China asked them to. Currently we can only take part in 30% of WHO activities, and only as observers. It is unfair treatment created by Chinese blackmail, which insists Taiwan cannot join [the WHO]. And this is not fair because it is a political decision that is affecting people’s health all over the world,” Sing-Ying Lee said.

Could the COVID-19 pandemic have been avoided?
If they had paid proper attention. If they had researched and made follow up investigations on our report, the epidemic would have been avoided. At least it wouldn't reached this level, to nearly 200,000 deaths, which is a disaster! We could have avoided all the economic and social losses we are still suffering.

By now the pandemic exists. So what are your expectations from the WHO?
The WHO must open its heart and eyes. It must see Taiwan as an asset, as a nation that is useful and experienced [at fighting disease]. Taiwan is the only country in the world that has managed to contain the virus, despite the fact it has 23 million inhabitants. We currently have had 1 coronavirus death out every 4 million inhabitants, whereas in Italy there have been 1 death for every 3,000 Italians. Herein lies the difference. Every country in the world follows WHO guidelines, but it is clear that they have erred in their management of COVID-19.  The WHO must see Taiwan as an independent country with a healthcare system completely separate from China’s and, thus, should be welcomed to become a WHO member country, also because we can help with our technology and funding. We would be so proud and pleased to be able to share our successful experience.

Indeed, last week the news spread that you had days registering zero infections, all this without lockdowns and keeping schools open. Can you tell us the secret of your success?
First of all, we had prepared in advance. Taiwan had already discovered several suspicious cases at the end of December and had asked Chinese authorities for information which, however, came back with unclear answers. So we started having doubts, since we are two different political systems and we know China's political and social system well. So we understood that they hadn't told the whole truth, because if there were isolated patients in Wuhan, it meant that they had a high probability of contagion. Furthermore, we employed our experience 17 years ago when we were affected by the SARS epidemic. We started taking people's temperatures and monitoring all international travel and limited in-bound flights from China, especially from Wuhan. Knowing that there was a risk of contagion, we began to mobilize our national health care system and immediately identifying those who had the symptoms.

How does the Taiwanese health system work and how have sick patients been identified?
We have 100% coverage through our National Health Insurance. All citizens carry cards with their personal data stored electronically. This allows us to monitor the health of our population. So we have managed to identify those that had symptoms and then isolate them thanks to this technology. Infected patients must stay at home and their movements are monitored by a mobile phone app. Thus, if a sick person leaves his home, an alarm is triggered and he is issued is a stiff fine. So we have not locked our whole nation at home, but only those actually infected as well as some suspected cases. Quarantined people receive financial help and food.

According to your successful experience, what recommendations do you have for countries like Italy as it prepares to reopen after the lockdown?
It is not easy to have Taiwan's technological infrastructure. For example, we have technology to detect those with fever and in 30 days we created 60 machines from scratch to increase masks production. Before the outbreak, Taiwan had the ability to produce 1.5 million masks per day. We now produce 15 million masks per day, so we have increased our production capacity by a factor of 10. Until a vaccine is discovered, the use of masks must be obligatory for everyone. Italy never obliged its residents to wear masks and now they can’t even easily be found. They must produce masks in Italy and distribute them free of charge, because not everyone can purchase them. Secondly, people must be educated to understand that it is everyone's responsibility to help contain the virus’ spread. Technology can also be used to help distribute masks. For example, we have a mobile phone app developed by young technicians that helps you locate pharmacies that have masks in stock and, for those who cannot go out, it allows them to be ordered for home delivery. In addition, the Taiwanese government gives each family three masks per week and five for children on a regular basis. The government distribution occurs whether people are poor or rich, because there are no such social injustices in Taiwan. So we have managed to arrive at zero new infections with collective participation because everyone is attentive to others.