The liturgical calendar commemorates today the heroic testimony of a large number of martyrs who made themselves imitators of Christ crucified in order to guard their greatest gift, faith, by shedding the blood with which the Chinese Church was built. 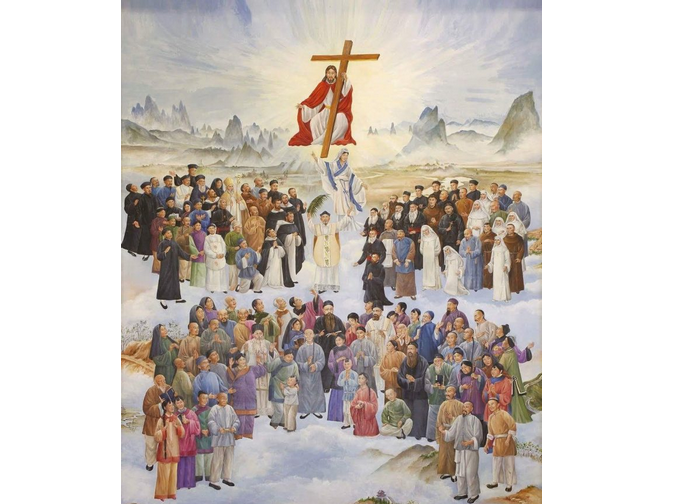 The liturgical calendar commemorates today the heroic testimony of a large number of martyrs who made themselves imitators of Christ crucified in order to guard their greatest gift, faith, by shedding the blood with which the Chinese Church was built. In particular 120 martyrs are remembered, children and adults of every social condition, from 9 to 79 years of age. They were killed and beatified at different times, but proclaimed saints all together on 1 October 2000 by Saint John Paul II, who in his homily extolled “the radiance of the holiness of these sons and daughters of China”.

Eighty-seven of these glorious martyrs were Chinese, while 33 were missionaries from different nations. Religious and lay people, catechists, seminarians, priests, nuns and bishops, fathers and mothers of families, even simple children. Like the fourteen-year-old Anna Wang († 22 July 1900), who rejected the attempts by the persecutors to make her apostatize and, preparing for her beheading, with her radiant face addressed her last call to them to choose God: “The door to Heaven is open to all,” said Anna, before whispering the name of Jesus three times. During the same period, which was particularly bloody and marked by the greatest number of recognized martyrs, eighteen-year-old Chi Zhuze (†June-July 1900) returned to the house of the Father. He continued to profess his faith in the Risen One even after his right arm was severed and while his torturers were preparing to flay him alive: “Every piece of my flesh, every drop of my blood will repeat to you that I am a Christian”.

However, the persecutions had begun well before the 20th century, developing in several waves and alternating with periods of freedom of worship. The Church recognized as the proto-martyr of China the Spanish Dominican priest Francisco Fernandez de Capillas, who was first imprisoned and tortured and then beheaded by the Manchu Tartars on January 15, 1648, while reciting the sorrowful mysteries of the Rosary with other faithful.

The leader of the group in the Martyrology is instead Augustine Zhao Rong (†1815), the first priest of Chinese nationality whose martyrdom has been ascertained. Before his priestly ordination, Zhao was a prison guard. Around the age of 26 he was called to guard imprisoned Christians. On this occasion he met a very patient priest, who even in prison continued to speak with great love of the truths of faith. Zhao was impressed and converted. He received Baptism and Confirmation on August 28, the feast day of Saint Augustine, whose name he adopted. Augustine Zhao helped the missionaries to baptize the dying children, victims of famine. He distinguished himself as a preacher, moving to tears his fellow countrymen who heard him tell the Passion of Jesus. He was captured in the context of the persecutions resulting from the edicts of the Emperor Kia-Kin. He died a martyr, after various tortures, in the spring of 1815.

The 120 martyrs remembered today are a small part of the people who witnessed Christ with the gift of their life. In fact, during the so-called Boxer Rebellion (November 1899 - September 1901) alone, which arose out of general resentment against the foreign presence and resulted in a specific hatred of Christianity, 32,000 Chinese Christians and 200 missionaries were killed. Among them was also Bishop Francesco Fogolla, who dedicated over thirty years of his life to China and refused to abjure Christ. To the imperial official who was about to strike him with his sword, Monsignor Fogolla said serenely: “We have not harmed anyone. On the contrary, we have done good to many”.

The precious blood of these martyrs continues to revive the faith of Christians today, among whom there are millions of Chinese Catholics belonging to the “underground” Church, so called because it was banned by the Communist regime. Under that regime, despite the controversial agreement of September 22, 2018 between the Vatican and China, the persecutions continue and - with them - the true testimonies of fidelity to Our Lord.