The whole liturgy of Good Friday exhorts man to contemplate the mystery on which his hope of salvation is founded: the cross. Jesus nailed to the cross reveals the folly of divine Love, which fulfils the ancient promises “as a lamb led to slaughter” (Is 53:7). 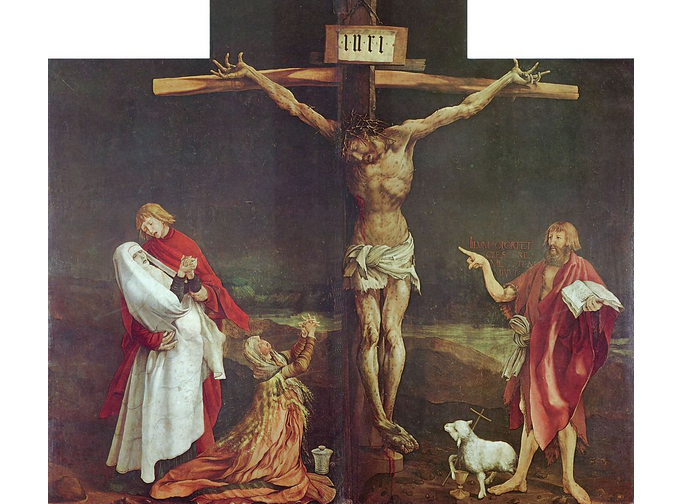 The whole liturgy of Good Friday exhorts man to contemplate the mystery on which his hope of salvation is founded: the cross. Jesus nailed to the cross reveals the folly of divine Love, which fulfils the ancient promises “as a lamb led to slaughter” (Is 53:7). The true God and true man who suffers on that wood is the Messiah announced by the prophets, the innocent Lamb who has loaded onto his sacred Humanity the sins of all men, past and future. He asks every man to follow Him and carry his own cross, because his obedient acceptance leads to eternal glory. Already Isaiah, prophesying the coming of Christ in the very intense passage known as the Fourth Song of the Servant, said: “Who would have believed our announcement?” Yet, precisely through his free abandonment to the will of the Father, Christ became a cause for justification. Therefore he would receive “in reward the multitudes”, the risen ones who will populate the heavenly Jerusalem.

That Crucified God who in the eyes of the world seemed a failure (scandal for the Jews and foolishness for the Gentiles, Saint Paul would say) is therefore the beating heart of our faith. And the cross, with its verticality, continually calls man to turn his gaze to his beginning and his end. The account of the Passion, like our own daily experience, clearly shows the reason for the Cross: the existence of sin and its consequences in human history. The betrayal of Judas, the religious trial in front of the synedrium, the “crucify him” shouted by the crowd in front of Pilate, the scourging, the crowning of thorns, the ascent to Calvary, the crucifixion, the insults, slaps and spits received by Jesus between the night of Thursday and His last breath at three o'clock on Friday afternoon, are the tangible sign of the work of the Evil One. God intended to free His beloved creatures from the power of darkness, asking them to collaborate in His saving plan.

When Christ on the cross says “I thirst”, not only does He fulfil the psalmist's prophecy about the offering of vinegar (Ps 69: 21) but, as the saints teach, he expresses his thirst to save mankind. He cries out to every soul His supreme desire to attract them to Himself. To welcome His grace. As the good thief welcomed it, he who in the hours spent on the cross realised who the Righteous One who hung beside him was. He had perfect contrition for his sins and heard Jesus say: “Verily I say to you, today you will be with me in Paradise”. As the pious women welcomed His grace, as did Peter and the other holy apostles, the many children of Israel who believed in him, each with his own history. Just as Mary, Mother of all the redeemed and Coredemptrix, was the first to welcome it, as she participated mystically in her Son's Passion, just as Simeon had prophesied to her (“and a sword will pierce your own soul too”). And it was to Her that Jesus on the cross, with the solemn entrustment of His beloved disciple, entrusted all His children. In the same way he said to every believer: “Behold your Mother”.

By very ancient tradition, the Church does not celebrate the Eucharist on Good Friday (nor the following day), but in the Roman Rite the faithful can take Communion with the Hosts consecrated the previous day and kept in the altar of Repose. The ecclesiastical fast, scheduled today for Christians between the ages of 18 and 60, is a sign of participation in the Lord's death, a call to penance and at the same time an expectation of the return of the Bridegroom (Mk 2:19-20), our Redeemer and final end. The celebration consists of a dense liturgy of the Word - which includes ten petitions, among which the one for Christian unity stands out - and has its fulcrum in the adoration of the Cross. The priest, as he proceeds with its ostention, recites or sings the Ecce lignum crucis: “Behold the wood of the Cross, on which hung Christ, the Saviour of the world”. And the faithful respond: “Come, let us adore”.