2021 is not only the centenary of the Italian Communist Party, but also of the much more powerful Communist Party in China which still wields (absolute) power over the most populous nation on earth. Regarding this occasion, celebrated next 23 July (date of the Party's founding in Shanghai), Chinese Catholics have received precise directives from their government. The Communist regime is promoting a "pastoral" programme that is actually political and aims to transform the Church into a mouthpiece for Party propaganda. 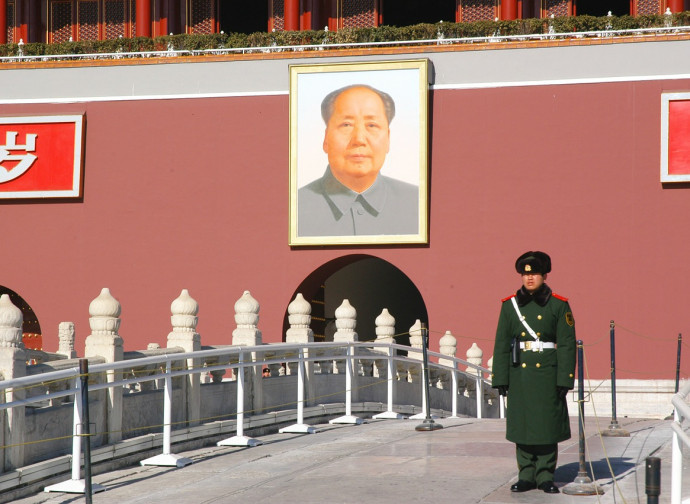 As we have already noted, following the approval of the new Administrative Measures for Religious Personnel, Catholic priests are now case profiled, monitored and, in fact, transformed into officials of the Chinese state. They’ll be banned from their religious functions should they fail to comply with the main directives which order them to “love the motherland, support the leadership of the Chinese Communist Party, support the socialist system, abide by the Constitution, laws, regulations, and rules, practice the core values of socialism, adhere to the principle of independent and self-administered religion in China, maintaining national unity, ethnic unity, religious harmony and social stability... [and to] operate to maintain national unity, national unity, religious harmony, and social stability.”

Under this pretext, priests are expected to fully participate in the Communist Party's celebrations next July. According to Asia News, Catholics in China will hold a symposium "in memory of the centenary of the founding of the Chinese Communist Party" and will delve into "the moving events that took place during the period of the Long March’", the Party’s founding legendary saga. The “Long March” involved an extensive northern retreat of Mao's Communist army while being hunted by nationalist forces during the civil war between 1934 and 1935. The Party’s dictates were announced in the state-approved Catholic magazine The Church in China. The article also mentions several other initiatives, such as "training modules in partnership with the Central Institute of Socialism; preparatory courses for the national gathering of the Chinese People's Political Consultative Conference; [and the] creation of the Patriotic Association", the state-approved Chinese Catholic Church loyal to and monitored by the Communist Party.

This series of initiatives aims to further subjugate the Church to Party control. They further undermine the intent of the Vatican-China agreement which recognises, at least in writing, the pope as the head of the Catholic Church. Yet, from a strictly cultural point of view, the whole campaign assumes truly outlandish characteristics since Catholics and, above all, priests will be forced to celebrate their worst persecutors. Chinese communism, like Soviet communism, was consistently and violently atheistic from its inception. Relatively little is known about the first decade of communism (1921-1931), partly because the Chinese Communist Party did not yet have its own territory to govern. Stories of unprecedented brutality date back to its very first territorial rule in 1927 and 1928. Taoist temples and their monks were the main victims. They were persecuted unless they submitted to the Party.

In the first veritable Chinese communist states, such as those established in the Jiangxi and Fujian provinces (1931-1934) and in the longest last one in Shaanxi, following the Long March (1935-1945) all the governing methods that would later characterise Mao Zedong's regime would materialise with dramatic clarity:  the collectivisation of land through persecution and elimination of the 'rich peasants', suppression of all forms of personal freedom, the creation and enculturation of a true Marxist cult from primary school onwards,  and the regimentation of society into Party organisations from childhood. Over time, Marxism merged with a personality cult actively promoted by Mao. Summary public executions were carried at "people's' trials" and  sessions of "self-denouncement". Then there was the systematic use of torture to force confessions which were followed by even more condemnations. All these were very common methods, especially during the two great purges that occurred between 1930-31 and 1942-43.

In this chapter of Chinese communism, the persecution of the Catholic Church and Protestant Christians were marginal, because areas with a high Christian density had not yet been occupied and because the primary enemies were others: "rich" peasants, real or presumed nationalist spies, and communists not aligned with Mao. More important enemies, from the beginning of China’s war with Japan, also included its real or presumed collaborators with Japan. In any case, the Communist Party made no secret of the fact that its regime was an enemy of all religions, which it considered a vestige of feudalism and needed to be destroyed.

The first great persecution of Christians, Catholics in particular, took place in the 1950s, the day after Mao seized power. The first victim was not a priest or a missionary, but an Italian military adviser, Antonio Riva. He was arrested in 1950 together with a Japanese man named Ryuichi Yamaguchi on charges of conspiring to assassinate Mao. Riva's execution took place in public in Beijing near Heaven's Bridge on 17 August 1951. His so-called "trial" served above all to mount Chinese public opinion against the Vatican.

"Mao was very interested in the Vatican," argued Jung Chang and Jon Halliday in their unofficial biography of the dictator, "particularly in its ability to inspire devotion beyond national borders. Italian visitors were often pelted with questions about the Pope's authority. The perseverance and effectiveness of the Catholics alarmed the regime which used the bogus assassination attempt to accelerate the takeover of Catholic institutions, including schools, hospitals and orphanages. An extreme smear campaign accused priests and nuns of a series of heinous acts, from outright murder to cannibalism and medical experiments on new-born babies."

The great Catholic purge, part of a broader campaign against “counter-revolutionaries”, led virtually to a complete extinction of the Church in China. From 1950 to 1955, the number of Catholic foreign missionaries dropped from 5,500 to a mere dozen. Once the missionaries had been expelled or imprisoned and freed of authoritative witnesses, the Communist Party immediately ratcheted up the persecution of Chinese Catholic faithful, who at the time were numbered around three million. According to estimates in the Black Book of Communism, 20,000 Catholics were arrested in 1955 alone. A few years later, arrests were in the hundreds of thousands.

From 1966 to 1976, during the years of the Cultural Revolution, Catholics were once again targeted by the communist regime. During this decade not even official Catholics of the Patriotic Association were spared from the Red Guards' fury. Little is known about this most turbulent time in communist China.  An Asia News article by Fr. Sergio Ticozzi recalls examples of countless episodes of violence and martyrdom, including the destruction and looting of churches as well as priests and nuns murdered out of hatred for their faith. The purpose of the Cultural Revolution was explicit: to eradicate the faith so as to impose the Maoist cult, now its own religion. At least the Cultural Revolution is recognised by today’s Communist Party as a dark chapter in its history –even if some of its features are still alive and well.

Especially since Xi Jinping became president, the Church has been transformed into a mouthpiece of Party propaganda; there has been the systematic re-education of those who refuse compliance; churches have been destroyed and crossed removed; religious buildings have been defaced or converted into Party social centres. These are all occurrences justified by the "Sinicization" of religion, that is to say, by the desire to create a "Christianity with Chinese characteristics." But when Christians, even in their own homes, are forced to remove religious objects or images of Jesus and replace them with portraits of Mao or Xi Jinping, this is a continuation of the Cultural Revolution, albeit via other methods. It is history that repeats itself, precisely because it cannot be studied. Chinese Catholics, who were once direct witnesses of Communist persecution, not only cannot memorialise the martyrs of their Church, but will now be forced to celebrate the crimes of their executioners.