Six out of ten Christian voters today would vote for Trump. Polls from the Pew Research Center also show that the current president has managed to move the Catholic electorate from the Dem Party to the GOP. Despite the protests and Covid, the numbers remain similar to 2016, not only because he “defends our ideas” but because he “has courage, does what he promises”. 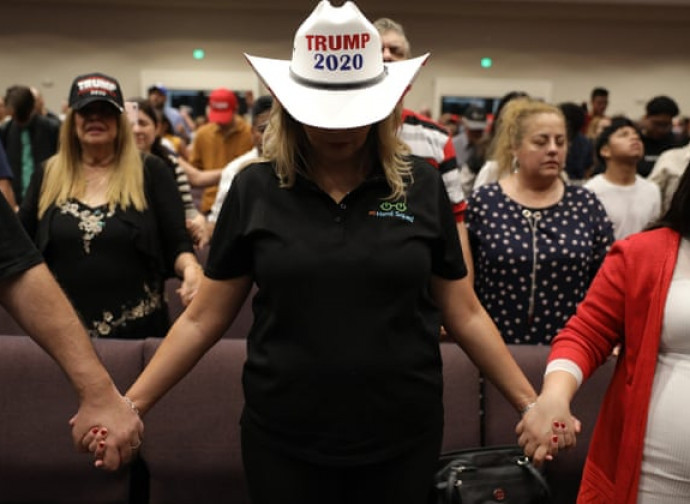 The Washington Times defines it as “a dramatic shift”, the fact is that it is a phenomenon that says of Trump much more than a thousand analyses on whether he is the answer to the need of those who seek political representation, betrayed for years.

The American newspaper reports the trend of the Catholic vote based on data from the Pew Research Center and analyses by CatholicVote (which monitors the Catholic vote in the United States). The image that emerges is that of a religious electorate that is increasingly emigrating from the Democratic Party to the Republican one (so much so that today the total number of Christians in favour of the President in office is 55% v. 43%).

Specifically, the Pew Research Center poll found that 51% of Catholic voters intend to vote for Trump, while 49% support Biden. This figure is significant when you consider that in the elections prior to Trump's candidacy Catholic Democrats had always been the majority (only in 2004 in the elections after 9/11 in 2001 did the Catholics who voted Republican outnumber the Democrats).

The president of CatholicVote, Brian Burch, clarified that “among Catholics who practise the faith in a substantial way, there has certainly been a drastic change in recent decades, away from the Democratic Party and towards the Republican Party”, a change, however, “particularly pronounced under President Trump“. In fact, as early as 2016, it emerged that Trump was the Republican president who had managed to attract to the Republican Party the most votes, both Catholic (52% of Catholics voted for him v. 45%) and religious (he was voted by 48% of all Christians v. 39% who supported Clinton). It is interesting, however, that the majority of Catholics will continue to support the Protestant president: “It is not enough to simply say that you are Catholic” to get the Catholics' vote, continued Bruce. So we reach the paradox that the majority of practising Catholics will still support the Presbyterian President rather than a Catholic Democrat.

The confirmation of the Catholic vote for Trump, according to Burch, is not only explained by the Republican President's positions on abortion and religious freedom, but also by the fact that he did everything that he promised to do, unlike others who, while supporting the same positions, did not go all the way: “The idea of the importance of our roots, of our country, of patriotism, of the family. ...”, but also “his strength and courage”, are a determining factor, because “many Republican administrations in the past have embraced the cause in words... but when things got difficult they abandoned ship”. For example, in addition to the fight against abortion funds and against political correctness, it was decisive that when Democrat governed states decided to close churches during Covid (but not shopping centres) and several religious leaders wrote to Trump in protest, his administration fought against the ban.

But already in March it emerged that more than two-thirds of Catholics said that the President “fights for what I believe in”. And, “the more you go to Mass and self-describe as followers of the Church's teachings, the more likely you are to vote for Trump”, added Matthew Bunson, editor-in-chief of EWTN at the Washington Times: “If you go to Mass less often and you disagree with the fundamental teachings (of the Church, ed.), you are more likely to support Biden”. He goes to Mass regularly but supports policies that are in stark contrast to the Church's teachings on natural law.

The same survey by the Pew Research Center found that if the 2020 presidential election were held today, 82% of white Evangelical voters would vote for Trump while only 17% said they would support Biden. Here, too, support for Trump is growing: the Pew Research Center poll conducted just after the 2016 presidential election found that 77% of white Evangelical voters voted Republican, while 16% chose Clinton. Finally, more than half (56%) of white Protestants who do not identify themselves as Evangelicals say they approve of Trump's work, as do 54% of white Catholics. It thus emerges that “about six out of ten of these groups (Christians, ed.) say they would vote for him if the elections were held today”.

The Washington Times rightly pointed out that “the days when almost 80% of Catholic voters joined in support of the Irish-Catholic Democrat John F. Kennedy in the White House in 1960 are over. Catholic voters today are divided on the 2020 candidates, even though Mr Biden is a lifelong Mass-attending Catholic and Mr Trump is a Presbyterian”.