Vinegar is the drink that was given to Jesus on the cross: a gesture of mercy, not torture, because water mixed with vinegar (posca) was used by Roman soldiers as a thirst-quenching drink. Along with ‘posca’, ‘sapum’, the forerunner of balsamic vinegar, was also used in ancient Rome. And vinegar producers have as their patron Saint Amandus of Maastricht, a hermit, later a missionary and bishop, who evangelised Belgium and northern France.

- THE RECIPE: EASTER SALAD WITH POACHED EGG AND BALSAMIC VINEGAR 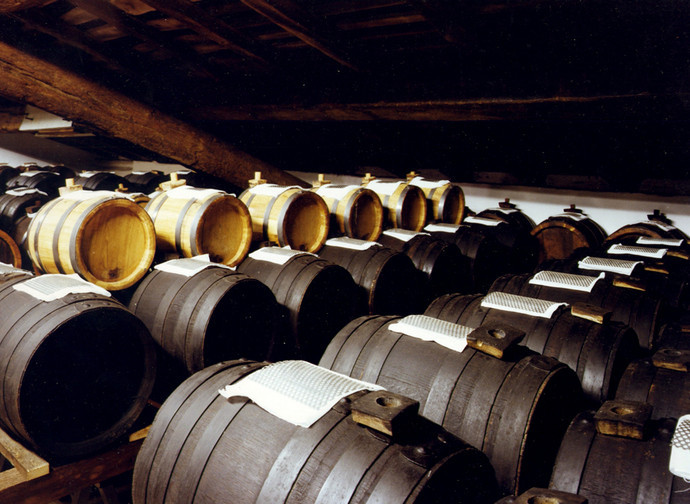 We are on that fateful day of 3 April 33, a long and tiring day for the Roman centurion who, together with the soldiers under his orders, had to accompany those condemned to be crucified through the city and then up to the Golgotha.
They supervised the operations of the executions, holding back the crowd on the verge of revolt. Not to mention the heavy armour - breastplate, metal ear defenders that started from the helmet and joined under the chin, helmet, and then the 2 metre long halberd that was part of the equipment. He is hot, the shouting voices give him a headache, sweat runs down his neck and he wishes he were anywhere but there. He stands at the foot of the cross of one of the condemned, the most contested, the one who caused so many problems: Jesus of Nazareth. And now that man, from high up on the cross says: “I am thirsty”. The centurion takes a sponge, dips it in his portable acetabulum filled with posca (water mixed with vinegar), skewers it onto the tip of the halberd, and lifts it up to the lips of the condemned man. The condemned man drinks it and then says: “Now all is accomplished”. And he dies.

The four Gospels recount this episode, a little differently one from the other, but if we consider the episode through the history of food, this gesture of the centurion was one of mercy, not torture.

Because in Roman times vinegar was used as a thirst-quenching drink, mixed with water and it was also offered to guests. This preparation was called posca. It was part of the daily ration of food for the legionnaires and accompanied them during the exhausting marches - about thirty kilometres a day, with loads of 20 to 30 kilograms - together with a kilo or more of bread, plus water, salt, meat, and oil. Because workers and fighters, except in extraordinary cases, were not allowed to have wine, even if they could afford it: Posca fortem, vinum ebrium facit (posca makes you strong while wine intoxicates).

In addition to posca, in ancient Rome they also used sapum, which was cooked grape must: it became a dark, viscous liquid with a sweetish taste, which was used to season figs, roast goose, mature cheeses, but also as a medicine (Virgil and Columella mention it). Sapum can be considered the ancestor of balsamic vinegar.

As well as from grapes, vinegar can also be made from rice and apples, but vinegar made from wine is the best-tasting vinegar and has the widest range of uses (cooking, medicine, cosmetics, and hygiene). This is why the patron saint of vinegar producers, Amandus of Maastricht (Nantes, c. 584 - Elon, c. 679), is so appropriate in these Easter days, as a tribute to the only act of charity that our Lord received from his tormentors during his painful journey to Golgotha and especially on the cross.

Born into a noble family, Amandus left his family at the age of twenty to become a monk according to the rule of St Columbanus. His family did everything they could to oppose this choice, because they had other plans for him, but they did not succeed in turning him away from his ideal of life. Following what he considered a divine inspiration, he went to Bourges, where, under the direction of Austregisilus, the bishop of that city, he remained in solitude for fifteen years, living in a cell and eating bread and water.

At the age of 33, after a pilgrimage to Rome, he was consecrated bishop in Gaul, after which, at the request of Clotarius II (584 - 629, Frankish king of the Merovingian dynasty), he went to the northern lands of the Frankish kingdom. He was the first to evangelise the inhabitants of the Ghent region, who were still largely pagan.
He later extended his work to all of Flanders: according to a hagiographic legend, he suffered persecution and great hardship, but did not convert anyone until he performed the miracle of resurrecting a criminal who had been hanged. In this activity he had St Bavon as a disciple and later as a helper.

Amandus had two monasteries erected: one in Ghent (St Peter) and the other on Mount Blandin (St Bavon), which are the oldest monuments of Christianity in Belgium.
On his return to Gaul in 630, he incurred the hostility of King Dagobert I, whom he had tried to lead to a virtuous life, and was expelled from the kingdom. Later Dagobert begged him to return, asking forgiveness for the wrong he had done, and asked him to be the guardian of the heir to the throne. But living at court did not suit the hieratic Amandus, who decided to refuse the honour. His next apostolate was among the Danube Slavs, but it was unsuccessful: they were still organised in tribal societies, refractory to Christianity.

Around the year 649, he was appointed Bishop of Tongres and Maastricht. The region was infested with clerical unrest, which Amandus tried to solve, but the task was enormous. Therefore, he turned to Pope Martin I for instructions. The Pontiff's reply outlined a plan of action with regard to the rebellious clergy and also contained information about the Monothelite heresy that was afflicting the East at that time (it was a Christological heresy that had arisen in Constantinople in that century, which claimed that in the person of Christ there was only the divine will which had absorbed the human will, thus limiting the true humanity of Christ). Amandus was given the task of convening councils in Neustria and Austrasia to make known to the bishops of Gaul the decrees that had been approved in Rome. In turn, the bishops of Gaul instructed him to bring the acts of their councils to the pope.
Amandus used this opportunity to obtain exemption from the bishopric of Maastricht and to resume his work as a missionary, which was his true vocation.
During this period he became acquainted with the family of Pippin of Landen and helped Gertrude of Nivelles and her mother, Saint Itta, to found their famous monastery in Nivelles (today's abbey, picture opposite).

Thirty years earlier he had already travelled to the Netherlands to preach, but had had little success. Now he was asked by the locals to return and, although he was now seventy years old, he undertook evangelisation, eliminating paganism from the country. In fact, Saint Amandus can be considered the apostle of Belgium and northern France.
Until the end of his life, Amandus continued to found numerous monasteries, sometimes at the risk of his own life (Belgium in particular boasts many of his foundations). He died in his nineties in the abbey of Elon.

In his iconography, Amandus is represented with a snake: The Golden Legend has it that he met a snake in the garden of a convent and, with the help of prayer and a sign of the cross, forced it into a hole and to never come out again.

Like many patron saints, he is not the only one to 'represent' vinegar producers. There is also Vincent of Tarragona. And he himself not only represents vinegar producers, but also brewers and wine merchants. But that will be the subject of our attention another time.