You want to learn about tasty and healthy eating? Get thee to a monastery

The secret of a healthy and tasty cuisine that avoids the cardinal sin of gluttony was already found in the Rule of St Benedict and also features in the work of St Hildegard of Bingen. Hundreds of recipes created in European monasteries have now become commonplace: vegetables, charcuterie, cheese, but also sweets and beers and liqueurs. The monastic culinary tradition is still very much alive and hundreds of monasteries in Europe and the USA sell their products online.
- THE RECIPE: LEFTOVER BREAD CAKE 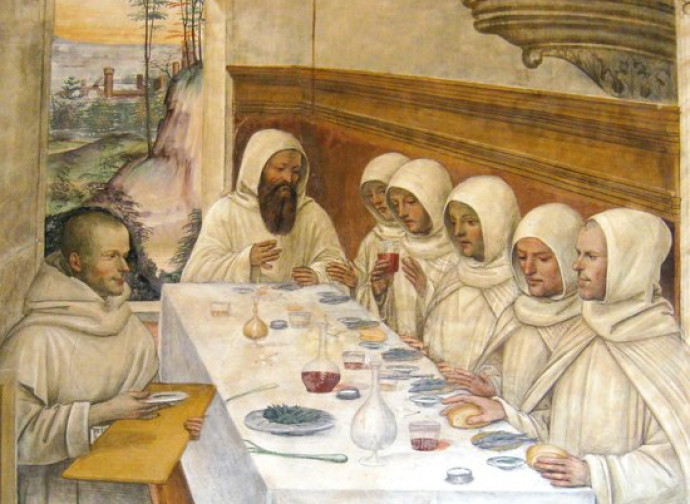 The seven deadly sins are the seven spiritual cancers that gnaw at the soul. But one of them - gluttony - also gnaws at the body. Excessive (or incorrect) nutrition lowers the body's defences, leads to obesity and related diseases, and can even lead to premature death.
Nowadays, various disciplines (general medicine first and foremost, but also psychology, dietetics, cardiology, naturopathy, etc.) are competing to claim that eating too much is bad for you.

Saint Benedict knew this well and expressed it clearly in his Rule: a fundamental text, especially with regard to the relationship with food, not only for the Benedictines, but for all people with common sense. His Ora et labora inspired a philosophy of behaviour and rules for living that have marked centuries of monastic life. Vegetable gardens, vineyards, orchards, chicken coops, brasseries, distilleries, and of course bread ovens, have always been present in monasteries, convents and abbeys, which have often opened their doors to the poor and the sick, the marginalised and wayfarers of all kinds, offering them food and temporary shelter.

Precisely because of their characteristic of offering hospitality, since the Middle Ages monasteries have also developed the art of “feeding”. They are the forerunners not only of hospitals, but also of hotels and restaurants: from kings to beggars, the monastery was an obligatory stop during a long journey. It offered security within the thick walls, a place to sleep and a warm dish.

But the food for the guests was very different from that offered to the monks: especially for high-ranking travellers, the dishes often contained meat (unless it was a time of fasting). The dishes prepared for the monks were mainly vegetarian: meat - and almost never meat from “four-legged” animals - was rarely used or only given to those religious who were sick.

The dishes were based on vegetables grown in the monastery kitchen gardens and enriched with herbs and spices also used for pharmaceutical purposes (the famous “physics”). We are talking about the first generalized form of cooking that pays attention to the benefits of food on the human organism.

An example of monastic medicine that influences nutrition comes to us from St Hildegard of Bingen, a Benedictine nun. She was proclaimed a doctor of the Church by Benedict XVI in 2012, on 7 October (the anniversary of the Battle of Lepanto). In her collection of books Physica or Liber simplicis medicinæ, she examines the causes of illnesses and how to treat them, and also what you have to do to maintain your health by paying attention to what you eat.

This care for health through food chimes with the trend of our time towards a simpler life (although here we are talking about a millennium ago).

Recipes were written down in notebooks which were then handed down. In addition to the recipes, the authors, inspired by their own experience, described tricks and tours de main necessary to perfect the dish. The successor in turn customised and enriched the recipes with their own variations, adding to the notebooks: this is how the first recipe books were born.

The dishes were very varied; the lion's share consisted of soups, and we have reviewed more than 400 recipes from European monasteries. We have also found recipes for stews, flans, dishes based only on vegetables and herbs (often medicinal), stuffed breads, charcuterie and cheese. France boasts the biscuits of Saint Martin (dedicated to Martin de Tours), the nonnettes, the speculos de l'Annonciade and many others.

Germany delighted the palates with Lebkuchen (word derived from the Latin libum, cake): they are soft, very spicy biscuits, often iced with a sugar glaze or topped with dark chocolate.

Many of these recipes are now commonly enjoyed in families and restaurants. There are even some great “starred” chefs, such as Marc Meneau in France or Silverio Cineri in Italy, who offer dishes inspired by monastic cuisine on their menus. Not to mention the books on this subject, which are sold out shortly after publication.

For about a decade or so, many monasteries have been selling on line food and drink of their own production. Many of these have become known to a wide public, not necessarily believers, but who could become so. The Abbey of Gethsemani in Kentucky (the oldest abbey in the USA), is known worldwide for its rich, dark fruit cake soaked in bourbon (photo opposite). The monks produce 70,000 pounds of fruit cakes a year and ship them to loyal customers all over the country and abroad. And the recipe is, of course, secret.

In Norcia the monks produce an excellent craft beer, the Nursia (photo opposite), which is worth buying to help them rebuild the monastery destroyed by the earthquake. In the French Alps there is the Monastery de la Grande Chartreuse which has been producing the liqueur that bears its name since the 12th century: Chartreuse. Also in France, opposite Cannes is the group of islands of Lérins, which can only be reached by boat: they have become famous throughout the world for the abbey on one of them (Île Saint-Honorat, photo below), which offers hospitality and the sale of extraordinary wines on the internet.
And we could go on...

The market of products produced within the monasteries is growing. Out of 340 French abbeys, 230 have started trading their products, in Italy there are 190, in Germany 155, in the United States more than 800.
Food products created in monasteries are now rediscovered and appreciated, not only because they are allies of our health, but also because they help to subsidise the places where they are produced.
Many consumers buy these products not only to help the monasteries, but also because they are quality products, made with love. This is why “monastic tourism” is developing, with the whole gastronomic corollary that this entails.

And for those who wonder if trade is compatible with religious activity, the answer is that monks and nuns trade, but do not accumulate money, because they use it to pay for the renovation and maintenance of buildings, meals, and expenses.
They are men and women of God who continue to pray and live very frugally.