Who gains if US bishops reject public sin?

The public sins of rulers are never only a "personal" matter. The pastors of the Church have the duty to protect their flock from scandal. We do not know how any possible clear position from American bishops will provoke reactions on a political level. However, one thing is certain: reiterating the Church's teaching on the need to refuse the Eucharist "to those who obstinately persevere in manifest grave sin" will lead to healthy reflections on Who is substantially present in the Blessed Sacrament. 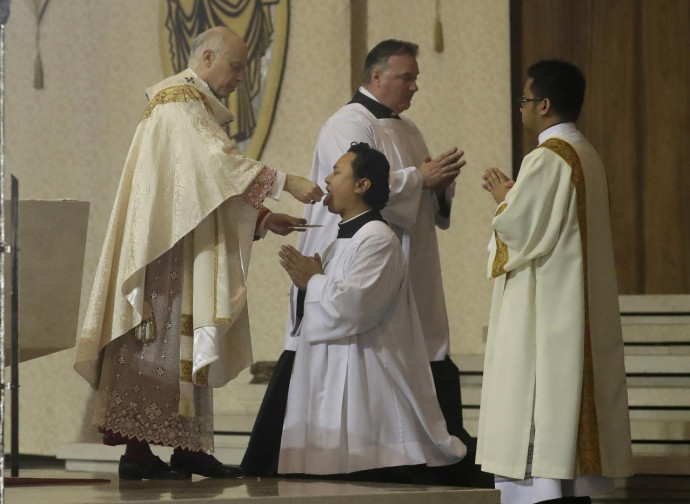 "Promoting the teaching of the Church and protecting the integrity of the Blessed Sacrament." This is what Salvatore J. Cordileone, Archbishop of San Francisco, stated during last Thursday’s edition of EWTN's The World Over  and is reason why American bishops, by an overwhelming majority of 75%, asked that the theme of Eucharistic coherence be treated in a memorandum on Holy Communion (see here). No doubt, it will be necessary to wait and see what is the actual content of said document. However, according to signals coming from the United States Conference of Bishops, there will be a strong and vibrant call for consistency today when all sorts claims are being made on the Eucharist and its reception.

The 168 bishops who voted in favour of the motion, both intelligently and courageously resisted the media's trap of wanting to use Eucharistic coherence as an anti-Biden political weapon (see here). They bore well in mind, as Cordileone himself recalled, that deciding on moral issues that necessarily also have public policy implications does not mean tossing everything into the political debate.

During the open discussions, all previous objections were debated. Bishop Robert McElroy of San Diego, who was appointed only two months ago to the Vatican's Dicastery for the Promotion of Integral Human Development, warned that excluding Communion from those who publicly support abortion and euthanasia would undermine the integrity of the Church's social doctrine and downplay the importance of other issues such as racism, poverty or environmental destruction.

Other interventions emphasised the risk of causing division. Cardinal Blase Cupich of Chicago sounded like someone from another planet when he put forward the perplexity felt by many priests when they "hear that bishops now want to talk about the exclusion of people at a time when the real challenge before them is to welcome them back into the regular practice of the faith." Evidently, they must have missed reading a few lines from Canon Law and some essential points of sacramental and moral theology.

It is clear that what inspired such debate within the assembly of the American bishops is the possible consequences brought about by a firm stance on this issue. This is so since, for the first time in U.S. history, a pro-choice Catholic is residing in the White House. However, it would be more proper to say Joe Biden is “pro-right,” as pointed out by the Archbishop of Kansas City, Joseph F. Naumann. He said that Biden and the Democratic Party are not so much talking about "choice" as they are about the "right" to abortion. On one hand, there are those who are concerned about political repercussions, with the risk of not being able to take full advantage - for whatever eventual purpose - of a Catholic president. On the other hand, there are others who have understood that quite different consequences (decidedly more important in terms of an authentically pastoral approach) will arise from not taking a position on Communion for those who publicly and obstinately uphold positions radically contrary to the Catholic faith on particularly serious matters.

It is not much talked about, but the problem of scandal cannot be dismissed, as if it concerned some childishness wishes of a handful of pious faithful. In most situations, it is precisely bad examples that lead others astray. And the more the person committing evil enjoys visibility, approval, authority, the more the malice of his actions cause a moral scourge for an entire nation and even for the whole world.

The Scriptures speak very clearly of how any ruler who commits and defends sin drags the entire nation into the abyss: "And the Lord will give Israel up because of the sins of Jeroboam, which he sinned and made Israel to sin.” (1 Kings 14:16). Again in Kings chapter 21 we read: "I will make your house like the house of Jeroboam the son of Nebat, and like the house of Baasha the son of Ahijah, for the anger to which you have provoked me, and because you have made Israel to sin." (1 Kings 21: 22). Things were even worse at the time of Israel’s Hellenisation, which the Maccabees reacted against.

The public sins of rulers are never just a "personal" matter. The pastors of the Church have a duty to protect their flock from scandal, and, in this way, to guard the nation from the calamities that the systematic and widespread acceptance of sin (in this case, the most abominable of sins) brings upon their land.

Preaching of the Gospel of life by the whole Church, but particularly by pastors, is incompatible with the idea that those who consciously, obstinately and publicly separate themselves from their faith of this Mystical Body can be received at the sacrament representing the most intimate communion between the faithful and the Body of Christ, the Sacramental Body of our Lord.

Neither must we fail to mention the real blasphemy of receiving the Bread of Eternal Life by those who support, promote and carry out deadly actions against their neighbour, particularly against those the most defenceless among them all, since their lives depend totally on others. The Eucharist is the life of Christ, of the Innocent One. It is given to us to free ourselves from the bonds of death - futurae gloriae nobis pignus datur! Procuring abortions, on the contrary, takes life from innocent children. Is there anything more dramatically opposed to the Gospel of Life?