The pro-communion offensive for Biden

The assembly of U.S. bishops to decide on a common position concerning the Eucharist to pro-abortion politicians begins today. But according to the New York Times, the Vatican has already decided the outcome. Fr. Antonio Spadaro and the New York Time contradict themselves by providing political "motivations" regarding an issue that concerns the heart of the Catholic faith and which is well-defined by both canon law and Ratzinger's 2004 CDF memorandum: the Eucharist should be denied to those in grave and manifest sin. 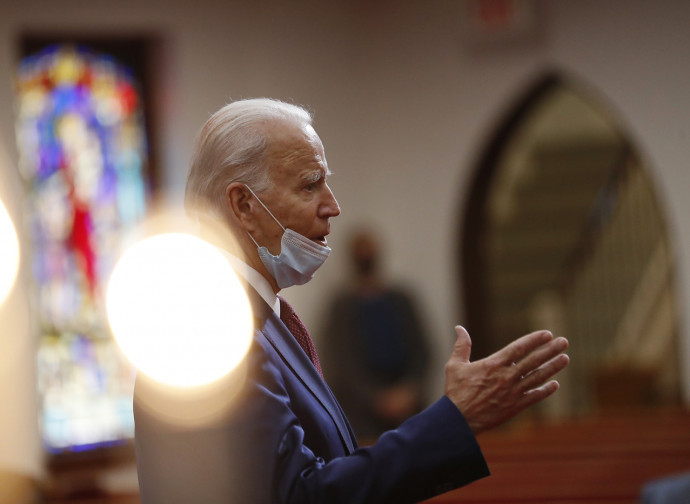 Jason Horowitz has ruled from his throne at the New York Times’ editorial pages (see here) that the Vatican has already decided on what to do regarding the issue of granting Holy Communion to politicians who support pro-abortion legislation. Pope Francis teaches there is no sin that excludes one from receiving the Eucharist. The argumentum ab auctoritate (“argument from authority”) is found in the words of Francis' Angelus of last 6 June: “When we receive the Eucharist, Jesus does the same with us: he knows us; he knows we are sinners; and he knows we make many mistakes, but he does not give up on joining his life to ours. He knows that we need it, because the Eucharist is not the reward of saints, no, it is the Bread of sinners. This is why he exhorts us: ‘Do not be afraid! Take and eat’.” If the truth be said, this is a common refrain of this pontificate (see here). But having brought up this issue once again on the Solemn Feast of Corpus Christi and just as debate by the United States Conference of Catholic Bishops is about to begin on it, was particularly "providential" for Horowitz.

Horowitz reports: “The Vatican has warned conservative American bishops to hit the brakes on their push to deny communion to politicians supportive of abortion rights — including President Biden, a faithful churchgoer and the first Roman Catholic to occupy the Oval Office in 60 years”. However, the New York Time’s adds: “Despite the remarkably public stop sign from Rome, the American bishops are pressing ahead anyway and are expected to force a debate on the communion issue at a remote meeting that starts on Wednesday (today).”

Apart from the questionable, but still generic, statement by Pope Francis, other authoritative signals came from the ever-present Fr. Antonio Spadaro and Cardinal Luis Ladaria. Ladaria, as Prefect of the Congregation for the Doctrine of the Faith, had sent a message that was, at the very least, vague. His words came in a letter dated May 7, 2021 in which he limited himself to giving procedural indications to American bishops (see here) and then pivoted, while vociferously distancing himself from Ratzinger/Benedict XVI's official position on the specific nature of the non-negotiable principles (see here).

Fr. Spadaro, editor-in-chief of La Civiltà Cattolica, on the other hand, took on the journalistic world: “The concern in the Vatican is not to use access to the Eucharist as a political weapon,” he stated. The New York Times immediately latched on to this and outlined the framework in which the controversy should be editorially framed. As Horowitz writes: “Some leading bishops, whose priorities are clearly aligned with former President Donald J. Trump, now want to reassert the centrality of opposition to abortion in the Catholic faith and lay down a hard line”. But the dignity of the Eucharist and the necessity not to scandalise the faithful, in truth, is a mere pretext for the New York Times. These conservative Catholic bishops, according to Horowitz, would be so pro-Trump they won’t even hold back so as not to “shatter the facade of unity with Rome, highlight the political polarisation within the American church and set what church historians consider a dangerous precedent for bishops’ conferences across the globe”. They seem worried that for some reason even in other countries, Communion might be denied for just a simple abortion ... Paradoxically, they criticise admission to the Eucharist being made a political question, when their "motivations" are exclusively of a political nature.

The Italian daily Corriere della Sera, from its perspective, decided to venture down sacramental and canonical paths by hastily dismissing Canon 915 as a “formulation [...] elastic enough to allow for different interpretations over time." In reality, editorialist Gian Guido Vecchi overlooks the fact that the Canon is quite precise. It defines with utmost clarity the categories of persons who cannot be admitted to  Holy Communion: anyone who is subject to ferendae sententiae censure and latae sententiae excommunication or interdiction. Canon 915 also includes those who "obstinately persevere in grave and manifest sin.” Here we have two adjectives and an adverb that say it all. While it may not be immediately clear that a politician who encourages abortion through legislation falls into the category of those affected by latae sententiae excommunication, as stated in Canon 1398, there is no doubt that he or she falls into the category of those who are in a situation of grave and manifest sin.

As the then-Prefect of the CDF, Cardinal Joseph Ratzinger, explained in his June 2004 memorandum Worthiness to Receive Holy Communion: General Principles and addressed to Cardinal Theodore E. McCarrick and Archbishop Wilton Gregory, respectively the former Archbishop of Washington and President of the United States Conference of Catholic Bishops: “Regarding the grave sin of abortion or euthanasia, when a person’s formal cooperation becomes manifest (understood, in the case of a Catholic politician, as his consistently campaigning and voting for permissive abortion and euthanasia laws), his Pastor should meet with him, instructing him about the Church’s teaching, informing him that he is not to present himself for Holy Communion until he brings to an end the objective situation of sin, and warning him that he will otherwise be denied the Eucharist.” Furthermore: When “these precautionary measures have not had their effect or in which they were not possible,” and the person in question, with obstinate persistence, still presents himself to receive the Holy Eucharist, “the minister of Holy Communion must refuse to distribute it” (cf. Pontifical Council for Legislative Texts Declaration "Holy Communion and Divorced, Civilly Remarried Catholics" [2002], nos. 3-4).

These are very clear and precise indications. However, in Vecchi’s opinion, since “the Magisterium of the Church changes and evolves over time” they should be superseded by “profound theological and canonical articulations” of statements such as: “Who am I? I am a sinner whom the Lord has looked upon”; or by “inclusive” affirmations such as those found in Francis'  encyclical Amoris Laetitia: “It is a question of integrating everyone, each person must be helped to find his or her own way of participating in the ecclesial community”.