When Caravaggio painted the Flight into Egypt on a tablecloth

“Rest on the Flight into Egypt” is an unusual picture that Caravaggio painted in 1597 on a Flanders cloth, a fabric then used to make tablecloths. It was painted during the Roman period of the artist, who lived a short and troubled life due to his quarrelsome temperament. 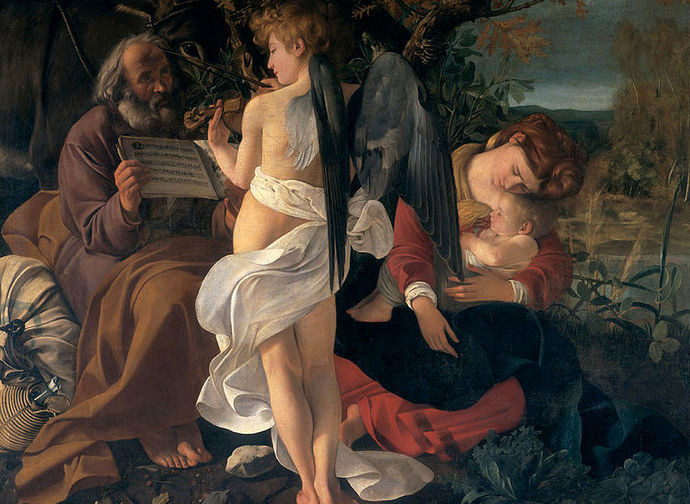 This writer likes to regale her readers with curious (or rather unusual) information about artists and their works. Today we are going to talk about the author of a painting executed on... a tablecloth. We are talking about Caravaggio's “Rest on the Flight into Egypt” (to keep with the theme of the life of Jesus depicted in works of art).

Perhaps the artist was short of money and could not afford a canvas to paint on, or perhaps he simply wanted to experiment: we will never know the real reason. The fact is that this extraordinary picture was painted on a piece of Flanders canvas, which at the time (and not only then) was used to make tablecloths.
Michelangelo Merisi (1571-1610), known as Caravggio, had a short and tempestuous life. The undisputed leader of the Baroque, he is an artist who can be considered a 'photographer' because of the intense precision of the details in his works.

This painting is no exception: in a rustic scene, we see Joseph and Mary sitting side by side, with the Child Jesus tenderly held by his mother and an angel playing the violin. The four characters are portrayed in minute detail: the gnarled, arthritic fingers of the elderly Joseph, the angel's ruffled hair, the musical score, the baby's pink cheeks and Mary's bowed head resting her cheek on the Child's head are elements of astonishing realism. The viewer can almost hear the rustling of the wind in the leafy branches of the tree that forms the backdrop to the Holy Family, the buzzing of insects, and the sound of the violin. The colours are vivid, except for the angel, who is wrapped in a white cloth and has curious black wings.
The painting, produced in 1597, depicts a New Testament episode in which the Holy Family fled to Egypt to escape the massacre of the Innocents ordered by Herod.

Recent laboratory investigations have revealed that it is painted on Flanders canvas: it was indeed an unusual material. According to recent research by Lothar Sickel, the painting belonged to Girolamo Vittrici, brother-in-law of Prospero Orsi, a friend of Caravaggio's. After Girolamo's death, his sister Caterina sold it to Cardinal Camillo Pamphilj (1622-1666), in whose collection it remained forever: in fact, the painting is still on display in the Pamphilj Gallery in Rome.

At that time Caravaggio was in Rome, the beating heart of art, attracting artists from all over the world. The main reason was that the city was home to the greatest patron of all time: the Church.
Caravaggio's century marked the decline of the Papal State: with the Counter-Reformation after 1545, the Church of Rome devoted itself to patronage in the arts, which it considered essential to promulgate the faith. These events formed the background to Michelangelo's birth.
He was born in Milan, but had spent his childhood in Caravaggio, a small town where his family came from. They had been forced to flee Milan, hit by the bubonic plague, when Michelangelo was five years old. But escape did not save them: his father and grandparents were killed by the terrible disease.

His mother, Lucia Arisi, raised the four children alone. Little Michelangelo immediately showed a difficult character: impulsive and quarrelsome, he was difficult to educate. His uncle decided to set him straight by sending him to Milan to work in a workshop at the age of 12. The workshop was that of Simone Peteranzo, a pupil of Titian. Michelangelo thus benefited from an excellent school, even if his master's excessively mannerist style did not influence the young man too much, who preferred a more realistic style of painting. If nothing else, he learned to perfection how to mix colours, choose the right brushes, prepare canvases, and set up frames.

Fate brought him into contact with the Archbishop of Milan, Carlo Borromeo, a prince of the Counter-Reformation, who frequented Peteranzo's workshop and commissioned work from him, especially frescoes for the many churches in the diocese. The future saint was impressed by the quality of Michelangelo's painting. He, who saw in the poor the image of Christ, was captivated by the characters, inspired by the women and men of the people, that the young artist painted. Many critics claim that Carlo Borromeo had a decisive influence on Caravaggio's art.

At the age of 21, the young man went to Rome, the cradle of art at the time. And he was not alone: hundreds of young artists arrived in the city, full of hope and justified expectations: Pope Clement VIII had decided to renovate the countless existing churches and build new ones, with the aim of turning the city into a recognisable symbol of a reawakening of the Catholic faith. Therefore, there was a lot of work for aspiring artists.
His life in Rome was hard at first, but soon the young Caravaggio was noticed first by Lorenzo Siciliano, whose studio was inundated with commissions and who tended to exploit the artists somewhat, and then by Giuseppe Cesari, also known as Cavaliere d'Arpino, who was Pope Clement's favourite painter and one of the most important painters in Rome at that time. And here began his unstoppable artistic rise. 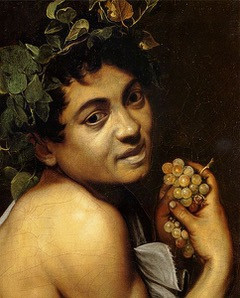 Two of Caravaggio’s most famous paintings date from this period: “Boy Peeling Fruit” (Longhi Collection, Florence) and “Boy with a Basket of Fruit” (Borghese Gallery, Rome); his friend Mario Minniti, then 16 years old, modelled for both of them. But Caravaggio himself was the model for one of his paintings from that period, “Young Sick Bacchus” (Galleria Borghese - photo).
Although highly regarded artistically, Caravaggio was less so from a personal point of view: he had a far from spotless 'criminal record', accustomed as he was to brawls and various acts against the law such as assaults (even against the police) and bad company. His 17th century biographer, Joachim von Sandrart (1606-1688), who was also a painter, states that Caravaggio "went around with his young friends, mostly brazen, bold, painters and swordsmen, who lived under the motto nec spe, nec metu (without hope, without fear). In the Roman police records of his time we find libels, street fights, desecration of other people's homes, stones against the police, arrests and reports, and more.

However, he had the enormous good fortune to find a sensitive and powerful patron, Cardinal Francesco Maria del Monte, who bought his first two famous paintings, painted in 1594, “The Cardsharps” (now in the collection of the Kimbell Art Museum, Fort Worth, USA) and “Buona Ventura” (now in the Pinacoteca Capitolina, Rome).
Thanks to Cardinal del Monte, Caravaggio had the opportunity to gain an important clientele among the Roman nobility. He achieved glory with the commission for the decoration of the Contarelli Chapel in the Church of San Luigi dei Francesi in Rome, for which, again thanks to the intercession of Cardinal del Monte, the artist was commissioned to paint two large canvases for the side walls of the chapel, depicting scenes from the life of St Matthew. The result was two absolute masterpieces, characterised by the chiaroscuro that we find in all the artist's future works, a technique that was called "Tenebrism" (from the Italian tenebroso, dark, gloomy, mysterious).

Thanks to these paintings he was called the ‘Most famous painter in Rome' and received numerous important and well-paid commissions.
But the glory was short-lived. The ugly nature of the man, who did not hesitate to exploit the name of Cardinal del Monte, got the better of the artist's fame and the inevitable happened on a May afternoon in 1606: he killed Ranuccio Tomassoni di Terni, a member of a military family of the pro-Spanish faction, in a duel.
The precise motive is unknown: historians do not agree on whether the bone of contention was a question of jealousy over a woman or, more banally, a game of pallacorda (similar to tennis). Recent studies indicate that the artist was provoked and that the killing was in fact an accident: the aggressor was Tomassoni, who, moving backwards, stumbled as Caravaggio's thrust reached him with fatal outcome (Sandro Corradini, "Caravaggio, materiali per un processo", Rome 1993, p. 70-72).

Caravaggio was condemned to capital punishment, a sentence pronounced by the pope himself (Paolo V Borghese). The Pope granted license to anyone in the Papal States to kill the painter and to display his decapitated head as testimony that justice had been done. Caravaggio had no choice but to take refuge first in the Colonna Palace in the Colli Albani above the city and then, still under the protection of this powerful family, he managed to escape to Naples (which at that time was, after Paris, the most populous city in Europe) and finally to Malta, in an attempt to put an ever greater distance between himself and the Pope's fury.
Here, thanks to the Grand Master of the Sovereign Order of the Knights of Malta (whose portrait he painted) he began to negotiate a papal pardon, despite the crime he had committed.

In the meantime he continued to look for trouble: he was arrested for assaulting a Knight of Justice. He managed to escape to Sicily, landing in Syracuse. Here he received many commissions, painted many masterpieces and exerted his influence on several artists, who were dubbed 'Caravaggioesques', such as Alonzo Rodriguez and his old friend Mario Minniti. He then went to Palermo, where the Franciscan Order commissioned him to paint the Nativity with Saints Lawrence and Francis of Assisi. The work was stolen in October 1969 and has still not been found.
He returned to Naples, where he painted other masterpieces. Finally, he decided to return to Rome to personally ask the Pope for a pardon. He never got there, because he died in Porto Ercole.

The cause of his death was surrounded by mystery for several centuries, but in 2010 a team of scientists studied his remains and discovered high levels of lead in his bones. Lead was an essential pigment in the preparation of colours that were mixed by hand. The high levels found in his bones led to the conclusion that he had gone mad: in fact lead poisoning was called 'painters' disease', the same disease that is suspected to have killed Vincent van Gogh and Francisco Goya.
The location of his death was confirmed by the discovery of a document in the registers of the parish of Sant'Erasmo in Porto Ercole, where Caravaggio's death certificate was found in 2001, which reads: "On 18 July 1610, in the hospice of Santa Maria Ausiliatrice, Michel Angelo Merisi da Caravaggio died of the disease".

The artist never knew that the Pope had granted him a pardon.