US presidential elections confirm the end of democracy

What is happening in the U.S. presidential elections is beyond belief. Since Trump is the quintessential villain and since every means is legitimate to get rid of him, we have witnessed a steady rise of "irregularities" at the polling stations. Above all, we have seen an alliance between the mass media and the powers that be to cover them up and legitimise them. Indeed, St. John Paul II’s prophecy, and reiterated not so long ago by Benedict XVI, is now being fulfilled:  “As history demonstrates, a democracy without values easily turns into an open or thinly disguised totalitarianism." 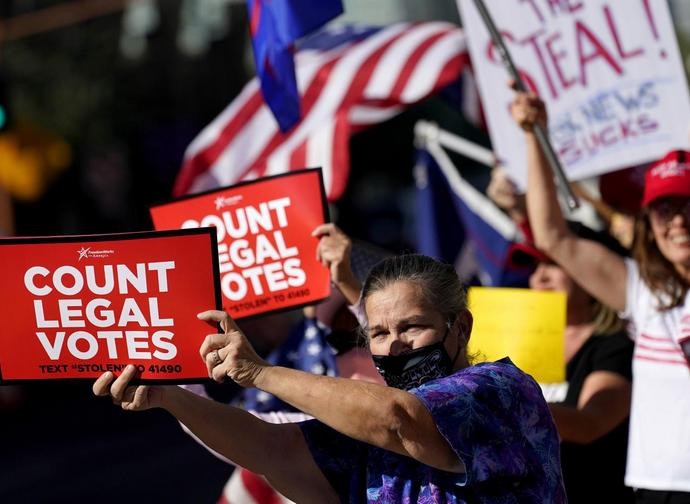 Donald Trump is the quintessential villain, hence it is quite acceptable to bring about his defeat take what it takes – whether licit or illicit. Its four years now this proposition has been parroted and restated in every possible way and at all levels. Right after Trump’s clear 2016 victory over Hillary Clinton, there were even those in the prestigious Foreign Affairs magazine – who argued that the use of military force was legitimate, in effect, calling for a veritable coup.

Back then Trump's victory came as a surprise and not much could be done about it. Nonetheless, a systematic smear campaign was unleashed against him. This involved insane judicial inquiries (e.g. Russian collusion in favour of Trump), relentless exaggeration and distortion of the president's jokes, and the systematic underestimation and downplaying of his political and diplomatic successes.

This continued right through to the preparations of this year’s presidential campaign, which shouldn’t have held any new surprises, leading a few days ago, to the current Speaker of the House of Representatives, Nancy Pelosi, tweeted she had no qualms stating that no matter what the election outcomes were, Joe Biden would still be president.

That said, what we are witnessing in these days is beyond belief: not just because of the "irregularities" observed at U.S. polling stations, but especially because of an alliance that exists between the mass media and the political powers that be to cover them up and legitimise them. First there was the sudden appearance of hundreds of thousands of ballots that overturned results and then journalists censoring President Trump during a live press conference. Soon, we will have government and big finance both ready to collude during the new Biden era. Trump had to be overthrown, even if the majority of the American electorate was for him. And it had to be done and by any means necessary. In the end, what we have here is no different than what happens in presidential elections in Africa.

“Things just don’t happen. They are made to happen,” as the saying goes. In this case, it was an oligarchy that decided against the will of the American people. What we are witnessing is not just an isolated bad episode but which does not cast doubt on the American system of democracy. Rather, what we are witnessing is the end of democracy itself, as it is meant to be. In the United States, a cultural and political totalitarianism has now well established itself. It is one which does not tolerate criticism and voices outside its own camp.

In Europe, this is nothing new. We have been experiencing this for quite some time. We witnessed what happened when certain countries voted against ratifying European Union treaties and now Brussels' war against those countries (e.g. Poland and Hungary) that insist on claiming their Christian identity. Moreover, as we have seen in Italy for the last ten years, election results are overturned if the left doesn't win and the country ends up being run by government leaders that no one ever elected.

Yet, until now, the United States has been admired, despite all its defects, as a point of reference for freedom and democracy. American has been viewed as a bastion against European socialist tendencies. But clearly not anymore. A destructive ideology, which we’ve seen at work over the last few months, is behind a movement wanting to cancel American history, as seen with its removal and defilement of the nation’s monumental statues. This ideology is also behind the violent Black Lives Matter movement and environmental groups dictating government agendas. It is now firmly in command of the United States and will impose on the nation a new totalitarianism.

Here is the irony of the story: the communist totalitarianism that led to the collapse of the Soviet Union and which seemed dead forever, now takes on a new life under mutated form in the very country which had once defeated it.

Indeed, this fulfills St. John Paul II’s prophecy, which was later reiterated by Benedict XVI. "At the dawn of the Third Millennium, democracy must face a serious question," wrote John Paul II in his message to the Sixth Plenary Session of the Pontifical Academy for Social Sciences (February 23, 2000) while referencing his encyclical Centesimus Annus. “Nowadays there is a tendency to claim that agnosticism and skeptical relativism are the philosophy and the basic attitude which correspond to democratic forms of political life. Those who are convinced that they know the truth and firmly adhere to it are considered unreliable from a democratic point of view, since they do not accept that truth is determined by the majority, or that it is subject to variation according to different political trends. It must be observed in this regard that if there is no ultimate truth to guide and direct political activity, then ideas and convictions can easily be manipulated for reasons of power. As history demonstrates, a democracy without values easily turns into open or thinly disguised totalitarianism." (Centesimus Annus, n. 46)

The same concept was expressed in John Paul II’s 1993 encyclical Veritatis Splendor, again emphasising the risk of an "alliance between democracy and ethical relativism, which would remove any sure moral reference point from political and social life, and on a deeper level make the acknowledgement of truth impossible.” (VS, 101)

Benedict XVI, in his November 14, 2012 General Audience, echoed John Paul II by stating  “when man is separated from God, [he] is reduced to a single dimension, the horizontal, and this very reductionism which is one of the fundamental causes of totalitarianism that have had tragic consequences in the last century, as well as the crisis of values ​​that we see in our current reality.”

A democracy without values easily turns into an open or devious totalitarianism, just as history has shown us. This is what’s happening right before our own eyes in a West that has denied God, in a West where man has made himself God. We are living under a totalitarian hood encompassing ideologies all grouped under an umbrella of whatever is politically correct. When someone puts up any kind of resistance, power is unleashed with every sort of violence. This is done obviously in the name of democracy (but didn’t communist regimes called themselves popular democracies?). The 2020 American presidential elections are proving this to be unequivocally so.