The war in Ukraine did not break out on 24 February 2022, but on 20 February 2014. First the annexation of Crimea, then the uprising of pro-Russian separatists in the Donbass caused a conflict which has cost thousands of casualties and almost two million refugees. A review of these eight years is essential to understand the reason for the current fighting. 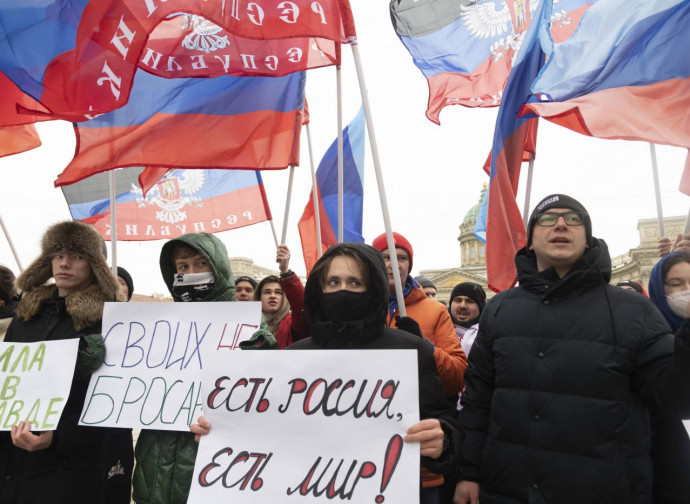 The war in Ukraine did not break out on 24 February 2022, but on 20 February 2014, when the Russian garrison at the Sevastopol base left its barracks and penetrated Ukrainian territory in Crimea. The subsequent Russian occupation of the peninsula, and its annexation, unrecognised by the international community, triggered a process of insurgency and counterinsurgency in the southern and eastern regions, is the origin of the Donbass war. This 'low-intensity' conflict, which has caused up to 16,000 deaths, according to the worst estimates, and almost two million refugees, has been hardly mentioned in Europe. But it is essential to understand the spirit with which the two sides are fighting.

It all started with the opposing interpretations of the Maidan uprising (21 November 2013-23 February 2014), which ended with pro-Russian President Janukovic fleeing. For Ukrainians it was a "revolution for dignity and independence", but for the Russians and Russian speakers of Ukraine it was a "coup" instigated by the West.

On 23 February 2014, two days after Janukovic fled Ukraine, pro-Russians in Sevastopol proclaimed their secession from Ukraine, appointed a new "people's mayor", Alexei Chalij, and called for Russia's armed intervention. On 27 February, unidentified Russian soldiers (initially thought to be local separatists, but Putin himself later admitted that they were regular troops) occupied all key points in Crimea. On 16 March, organised by the new authorities and without the presence of any recognised international observers, 95.3%, an overwhelming majority, voted for separation, paving the way for the subsequent annexation of Crimea to Russia, still unrecognised by the international community.

After Crimea, the anti-Kiev uprising spread to other cities in the south and east. Between 6 and 7 April 2014, serious unrest, such as the occupation of municipal and regional offices by armed militias, was led by local militias. One of the military leaders of the insurgence in the Donbass, Igor Girkin, was a Russian citizen and former member of Moscow's secret service. Several members of the Crimean separatist forces were also identified among the insurgents. The eastern insurrection, therefore, was at least supported by the Russians and this is why the official Ukrainian narrative speaks of an "invasion" rather than a spontaneous insurrection. The counter-revolution as a whole failed in six of the eight regions where it broke out. Only Donetsk and Lugansk remained in the hands of the separatists who, on 11 May 2014, proclaimed independence following another referendum carried out by the separatist authorities without the presence of recognised international observers. At the same time as hostilities began in the Donbass, the last tragedy of the civil conflict unfolded in Odessa on 2 May, with the pro-Russian uprising ending with 48 militants killed in the burning of the House of Trade Unions. The Russians blamed the Ukrainian authorities and accused them of a 'massacre', but they still speak of an 'accident'. The Odessa massacre, however, is an issue that still burns in the hearts of Russians, not only in the Donbass.

In the first phase of the Donbass war, which culminated in June-August 2014, the Ukrainian army and the volunteer battalions at its side slowly gained the upper hand, recapturing the port of Mariupol, the cities of Sloviansk, Kramatorsk and Debaltseve, reaching as far as the outskirts of Shakhtarsk on the road from Donetsk to Lugansk. On 17 July, the war seemed to become international when the Malaysian Airlines flight MH-17, with 298 passengers on board, was shot down. Moscow immediately blamed Ukraine for the downing, but the Ukrainians and some Western intelligence agencies proved that the Buk missile that destroyed the Boeing came from a territory controlled by the separatists. A preliminary international investigation conducted by the Joint Investigation Team, in 2016 came to the same conclusion.

The second phase began in August, when the Ukrainians, in some southern sections of the front, again reached the border with Russia. At this point, how the story unfolds is still a matter of debate. Officially, from mid-August, the Russians sent humanitarian aid to the separatists in long truck convoys. After receiving this aid, however, the separatists were much better trained and armed, so much so that they resumed the offensive and drove the regular Ukrainian army away, both from the border and from the more advanced salients close to the capitals of the two oblasts. The Ukrainians, at this stage, claim to have been hit on several occasions by Russian artillery firing directly from Russian territory. The separatists' counter-offensive was denounced by Kiev as a covert Russian invasion. And as proof of Moscow's direct participation, the army reported numerous examples of heavy weapons (rocket launchers and tanks) belonging to the Russian arsenal.

The situation stabilised in September, with the reconquest of about 50% of the territory of the Lugansk and Donetsk oblasts. The battle itself ended with the Minsk agreements, mediated by the OSCE and with the direct participation of Germany and France, on 5 September. Among the 12 points of the agreement was the recognition of Ukraine's territorial integrity in exchange for a special status for Lugansk and Donetsk, subject to the withdrawal of troops beyond a security zone, all monitored by OSCE observers. The agreement fell through in November, when the separatists, further strengthened, launched a new attack.

In this last phase of the conflict, between September 2014 and February 2015, the separatists besieged Ukrainian regulars at Donetsk's Sergei Prokofiev airport and aimed to recapture Debaltseve, to flatten its salient and secure the two Donbass capitals. The airport only fell into separatist (and Russian) hands on 21 January 2015, after nearly four months of siege. By the first week of February, the separatists also recaptured Debaltseve, ending this phase of the counter-offensive. On 11 February, the second Minsk agreements (Minsk 2) were reached, reiterating the same format.

The months from April 2014 to February 2015 left indelible scars and created myths. A war waged by irregular militias at a time when the regular army is disintegrating is a safe environment for criminals. The Russians denounced indiscriminate bombing, as well as massacres by the Azov Battalion, made up of far-right volunteers not only from Ukraine. Ukrainians denounced the torture and killing of prisoners by the separatists, the discovery of mass graves full of the bodies of slaughtered civilians, and the crimes committed by Chechen and Russian volunteers. The war has also created warrior myths, such as the resistance of the Donetsk airport, defended by Ukrainian 'cyborgs', which is still an example for the Ukrainian military fighting against the Russians.

Once the battle was over, however, the war never ended. Ukraine never accepted the constitutional reform that would have granted special status to the two new self-proclaimed republics, because the separatists never withdrew and the Russians never admitted the presence of their troops on the ground. After 11 February, the conflict was "frozen": no military operations, but sporadic actions with light weapons. In some cases, artillery was also used. Never again was the violence of the 2014-15 conflict reached. The separatist-ruled republics of Donetsk and Lugansk have become black holes in the history of Europe, like the similar cases of Transnistria, Abkhazia and Ossetia, republics recognised by Russia alone.

The human cost of this invisible war is immense. The Ukrainians claim 4,641 dead among their own military, the separatists claim 5,772 dead among their militiamen. Civilians killed number 3,393 according to the UN High Commissioner for Human Rights. Refugees from the Donbass who fled to Russia number 800,000. Internally displaced persons in Ukraine number about 1 million. Russian sources speak of tens of thousands of civilian victims and now, as justification for the invasion of Ukraine, they speak of 'genocide' in the Donbass. However, it is unclear why, for eight years, Russia, which is a permanent member of the UN Security Council, has never accused the Ukrainian government of genocide and has not at least called for an investigation or for a peacekeeping force.