Tiepolo’s unique depiction of the Holy Family docking in Egypt

Tiepolo's Flight into Egypt, conserved in Lisbon, is very special because it refers to a little shown episode in the life of Jesus, namely the moment when the Holy Family docks on the Egyptian coast. This is the story of the most famous 'ambassador' of 18th-century Italian art in the world.
- THE RECIPE: CHOCOLATE AND WALNUT CAKE 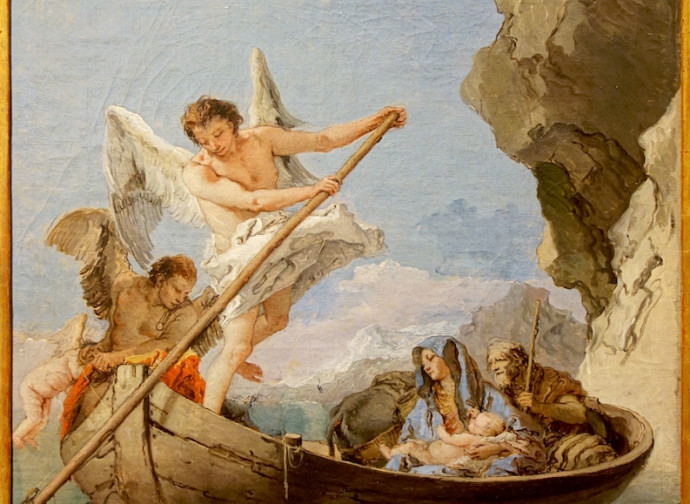 At the Museu Nacional de Arte Antiga in Lisbon, there is a very special painting.  Although it depicts a chapter in the life of Jesus that has inspired dozens of artists over the centuries - The Flight into Egypt - it depicts a rarely shown scene, namely the moment when the Holy Family docks on the Egyptian coast.

It is a painting by Tiepolo (1696-1770), dated to the last period of the artist's life between 1764 and 1770. It is an oil on canvas and measures H 57cm x W 44cm. Two swans, symbols of faithful love, are depicted in the foreground. A hostile, rocky landscape fills the right of the scene, with three birds of prey circling in the sky.

There are sketches of this scene (ink and chalk on paper) with variations, including one in the Morgan Library in New York.

But who was Tiepolo? Giovanni Battista (or Giambattista) Tiepolo was born in Venice on 5 March 1696 and died in Madrid on 27 March 1770. The last of the six children of Domenico Tiepolo, a merchant ship captain, and his wife Orsetta, Giovanni Battista’s father died when he was only one year old. He entered Gregorio Lazzarini's workshop in 1710 as a pupil, but was more influenced by Sebastiano Ricci and Giovanni Battista Piazzetta. In 1715 he completed his first important work, the Sacrifice of Isaac, and in 1716 he received his first commission for the Ospedaletto Church. He left Lazzarini's studio in 1717 and was accepted into the painters' guild.

In 1719 he married Cecilia Guardi, sister of the Venetian Rococo painters Gianantonio Guardi, Nicolò Guardi and Francesco Guardi, by whom he would have ten children, of whom four girls and three boys would survive. These included Giandomenico and Lorenzo, who became artists themselves after a period spent as their father's assistants. In 1720 he produced his first profane works at Villa Baglioni (Padua-Massanzago).

A patrician from Udine, Dionisio Delfino, commissioned him to decorate the frescoes in the chapel and the palace (1726-1728). There he painted The Judgement of Solomon on the ceiling of the Salone Rosso of the Archdiocese, considered his first masterpiece. He produced his first important works in Venice between 1726 and 1729: they were a cycle of huge painted canvases of ancient battles and triumphs to decorate a large salon in the Palazzo Dolfin Manin.

He quickly became a sought-after and prolific painter: he painted canvases for the churches of Verolanuova, a ceiling for the Jesuits in the church of Santa Maria del Rosario (or dei Gesuati) in Venice, for the Scuola dei Carmini, a ceiling for the Archinto and Casati-Dugnani palaces in Milan (1731), the Colleoni Chapel in Bergamo (1732-1733), at Palazzo Clerici in Milan (1740), the decorations for Villa Cordellini in Montecchio Maggiore (1743-1744) and for the ballroom of Palazzo Labia, with the story of Cleopatra (1745-1750).

Around 1740 he collaborated on the engraving of Giuliano Giampiccoli's series of prints of landscape views by Marco Ricci (36 landscapes with two frontispieces) published around 1740 and reprinted with additions in 1775 by Teodoro Viero. The complete series of 36 landscapes is in the British Museum.

At the invitation of Prince-Bishop Charles-Philippe de Greiffenclau, he left with his two sons for Würzburg where they stayed for three years, and there he decorated the living room of his new residence with them, then the immense ceiling of the monumental staircase of Johann Balthasar Neumannote. His Allegory of the Planets and Continents (photo) shows Apollo on his daily journey; the gods symbolise the planets, and the allegorical figures on the cornice represent the four continents, including America. He had already used this theme in the Baglioni salon in Padua in 1720 and in the Clerici salon in Milan in 1740. He also painted the frescoes in the Kaisersaal and the surrounding convents.

He returned to Venice in 1753 and bought a villa in Zianago funded by the fortune he had accumulated in Würzburg.

He was elected president of the Academy of Padua and painted frescoes for churches including the Triumph of Faith for the Church of the Pietà. He engaged the services of a master in perspective, Gerolamo Mengozzi Colonna. He created the frescoes at Ca' Rezzonico and continued with the frescoes of Cleopatra at Palazzo Labia with The Meeting of Antony and Cleopatra, Cleopatra's Banquet and a central ceiling with The Triumph of Bellerophon in Time. He worked on the villas of patricians in the Venetian countryside, such as the Villa Valmarana, those of the Cordellina and Loschi families in Vicenza, as well as a large funeral ceiling for the Villa Pisani in Stra. In Milan he received commissions from the Archinto, Casati and Clerici families.

Tiepolo was renowned locally, but also overseas, such as in Russia and England. In 1761, King Charles III of Spain commissioned him to paint a ceiling fresco of the Apotheosis of Spain for the royal palace in Madrid. At the beginning of 1762 he left for Madrid, where he remained until his death.

An excellent painter, he influenced Francisco Goya through a remarkable technique that, moreover, later gained great recognition: light, the "illumination" of specific parts of the painting with light colours to bring out impressions or ideas, such as purity or the divine.

His themes almost always include an allusion to death and magic.

Even though the greatest historian of 20th-century Italian art, Roberto Longhi, considered Tiepolo a frivolous artist, comparing him to Cecil B DeMille, the Hollywood pioneer of epics (tacky and exaggerated historical re-enactments), we cannot deny the huge role of ambassador of 18th-century Italian art that this extraordinary artist represented