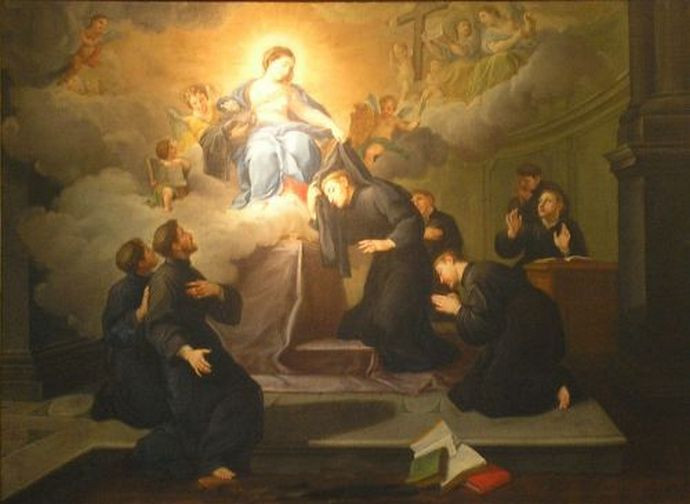 The Seven Holy Founders were those men of God who founded the Order of the Servants of Mary (known as the Servites) following the apparition of the weeping Blessed Virgin, on August 15th and September 8th of the year 1233. According to a reliable Servite tradition, it was Our Lady who inspired the Order's name, as well as its rule and habit. The earliest document about these Saints is the Legenda de Origine Ordinis (literally:"Things to read on the origin of the Order"), compiled in 1317, most likely by the then prior general, Peter of Todi. He had joined the Servites some time before May 1295 and had known Brother Alexis Falconieri († 1310), the best-known of the Seven and the last one to die (at nearly 110 years old), uncle of Saint Juliana Falconieri, founder of the female branch.

The Seven Founders of the Servite Order were all Florentine businessmen. Previously, they had belonged to a city confraternity in honour of the Virgin Mary, and their deep faith was fortified by penance. A vision of the Virgin of Sorrows (which prompts a reflection on the possible definition of Mary as Co-Redemptrix, in the service of her Redeeming Son), whose cult they would later spread, led them to abandon everything except what was necessary for their families and distribute the rest to the poor and to churches. After a period of preparation spent in their own homes – involving mortifications, modest meals, prayers and robed in a grey tunic – the Seven began life as a community in a small house just outside the walls of Florence.

From then on, they were known as "Servant Friars of the Blessed Virgin Mary", a name which, according to the Legenda de Origine was "divinely inspired" by the heavenly Mother. In the words of Saint Alexis Falconieri: "I have never been able to know, neither by myself nor from others, that this name was given for the first time by someone. Therefore only Our Lady gave it to our Order, and this fact, as a memory, was believed and confirmed also by my fellow-brethren". The other founders were called: Bonfilius (apparently their leader), John Bonajuncta, Bartholomew Amidei [Amadio], Benedict dell'Antella [Manetto], Ricoverus Uguccione and Gerard Sostegni [Sostegno]. Attracted by the holiness of their lives, many people visited the Seven, who, "continually impeded in their yearning for contemplation", eventually retired to Monte Senario, where they founded a convent and where, in the 15th century, a sanctuary was dedicated to the Mother of Sorrows.

Over the years, the Seven would welcome new companions who wished to live in humility, prayer and penance. This led to other convents being founded in different cities. Among the people who followed their example there was the Florentine Saint Philip Benizi (1233-1285), born the same year the Order was founded, who entered the Servites in 1254, becoming one of the brightest examples of holiness: "the lamp prepared by God", as the Legend has it.

Meanwhile, in 1244, the Founders met the Dominican Peter of Verona (ca. 1205-1252), future saint and martyr, sent by the Pope to Florence to combat heresy. Peter, whose preaching they admired, became their spiritual father. He fervently asked the Virgin that he might discern whether the Order was really within God's plan and, in that case, which habit and rule should be adopted. The Seven added their fasts to his prayers, and Mary appeared to Peter in a vision. She confirmed that the birth of the Order had been granted to her by her Son, and that the friars were to follow the Rule of Saint Augustine and dress a habit that would be "a clear indication of what she had suffered in the bitter passion of her Son".