The planned death of Archie Battersbee kills a mother's love

After a hard four-month legal battle, the doctors at the Royal London Hospital have won: Archie, the 12-year-old youngster in a coma since April 7, had his life-support removed and was left to die in hospital with a procedure that smacks of an execution. He died at 12:15 on 6 August. His brave mother, Hollie Dance, fought until the last moment to affirm the right to life and the primacy of parental love against a state that claims the power of life and death over its citizens.
- ARCHIE'S BRIEF LIFE IS IN ITS LAST HOURS, by Patricia Gooding Williams
- ARCHIE'S EXECUTION SCHEDULED FOR TODAY, by Patricia Gooding Williams 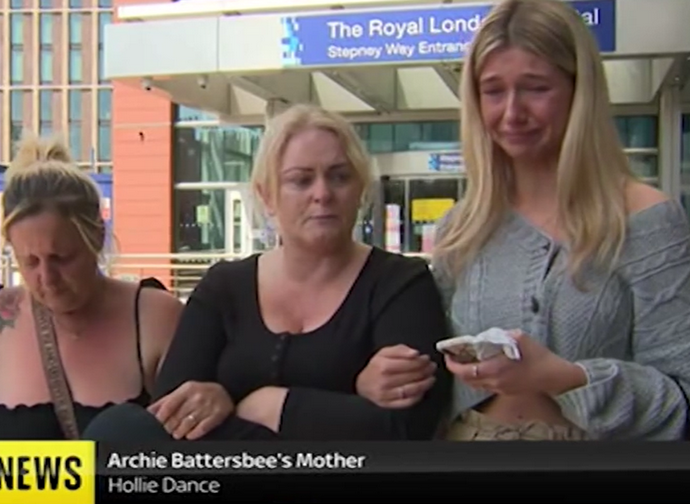 “At its heart this has been a case about a mother’s love, but also her rights. At what point did Archie’s dad and I lose our parental rights in terms of deciding what we want for our child?’ Sadly, Hollie Dance is right. If the UK courts had not delivered their son Archie Battersbee, against their wishes, in to the hands of the healthcare professionals convinced death was in Archie’s best interests, he would still be alive today..

Archie Battersbee, the 12-year-old school boy from south-east London, at the centre of a high-profile legal battle, had his life support withdrawn at 10:00 on 6.August. He died at 12:15 as he had lived throughout his short life, warmly embraced by the persons who love him. It was Hollie to break the news, speaking outside the Hospital: "Archie passed at 12.15 today. I'm the proudest mum in the world, such a beautiful little boy, and he fought right until the very end", she said.
Ms Ella Carter, Archie's aunt, heart-broken described his final moments. She said: "He was taken off all medication at 10 o'clock. His entire stats remained completely stable for two hours until they reduced ventilation. Then he went completely blue. There is absolutely nothing dignified about watching a family member or a child suffocate. No family should ever have to go through what we've been through, it's barbaric."

His death came 122 days after Hollie Dance found her son Archie, unconscious on 7 April, when he accidentally strangled himself with a ligature at home in Southend-on-Sea, Essex. His mother believes, he could have been attempting the 'blackout challenge', a dangerous Tik Tok trend that has killed at least two other children. 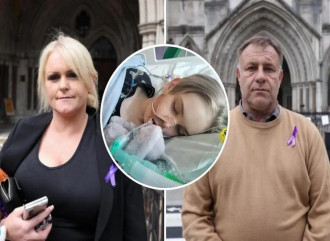 Archie’s accident soon thrust, his parents, Hollie Dance, and Paul Battersbee, onto the front pages of the British tabloids when they became embroiled in a hard legal battle, initiated by Barts Health NHS Trust, administrator of the London Royal Hospital caring for their son, at the end of April. Archie’s doctors were adamant his life-support should be withdrawn. Hollie and Paul disagreed with the Trust insisting Archie should be given more time to recover.

“With all due respect, the doctors said Archie wouldn’t last 24 hours and here we are on day 121”, Hollie said two days ago. “Other countries give their children 6 months. Why should this country (UK) be able to end a child’s life, at any age, within a matter of weeks? They wanted to end his life from the second day in”, said Hollie.  From then on, Hollie vowed she would fight to the bitter end to save her son supported by the charity Christian Concern. But when the family lost every legal contention lasting four long months, they shifted their focus to a final legal stand-off against the Trust in the High Court, to give Archie a “peaceful, dignified death”.

A dignified death was the family’s one last request. It involved moving Archie to St. Mary’s hospice, a short drive from the Royal London Hospital, where Archie had been treated since his tragic accident. Hollie told the Daily Compass, “Tom, Archie’s brother, had arranged a place at the hospice for his younger brother a few days ago so that Archie could spend his final moments in a beautiful garden with squirrels and wildlife, in the summer sunshine”. Furthermore, “Archie has not seen the light of day for four months and we want to give Archie the final goodbye he would want, away from the tense, noisy, chaotic environment of the hospital. But the hospital refused to let Archie go”. 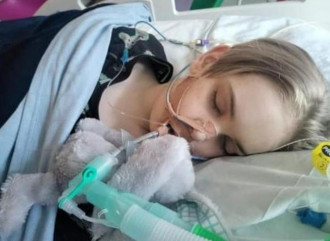 Once again, lawyers for the family worked through the night to prepare the legal documents necessary for another relentlessly tight deadline set by the courts. The High Court hearing, presided over by Mrs Justice Theis lasted seven hours and led to an 11th hour appeal the next day, 5 August. When that was rejected, it was chased up by a last-ditch appeal to the European Court of Humans Rights (ECHR). And, after that too was rejected, it dashed the family’s last hope and condemned Archie to die where he was in his hospital bed according to the hospital protocol which smacked of an execution. Once again, as in life, the family’s wishes were denied in death.

When the Daily Compass questioned Barts Trust press office on the reason for refusing the family’s request. Molly Downing, responded for the Trust with an email stating: “Archie is in such an unstable condition that there is considerable risk attached”...... transfer by ambulance to a completely different setting would most likely hasten the premature deterioration the family wish to avoid”.

But it read more like an excuse and took the family’s words out of context. Indeed Archie’s case was delicate, but it couldn’t be defined an insurmountable problem. Countless high-risk patients are transported in air ambulances for life-saving treatment, or in ambulances from one hospital to another, all the time. We all remember the case of Alfie Evans in 2018, when Pope Francis asked for Alfie Evans to be admitted to the Vatican paediatric hospital, Bambino Gesù. At the time, the manager Mariella Enoch told the Daily Compass, “we are very experienced at moving seriously ill children even on long international flights. We moved a 7-year-old girl from Syria who had been severely burned in a raid and nearly died a few days ago. She is recovering in intensive care. We can transport Alfie”.  Certainly, if there are the means for such a long and complicated transportation, the case presented by the Trust doesn’t stand under scrutiny. In fact, an experienced doctor, giving evidence for the Battersbee family at the High Court hearing testified that in his professional opinion, “there is a 1% chance Archie would have a heart attack in transit.”

Without doubt, that was the last possible act of cruelty, the Trust could inflict on the vulnerable youngster and his heartbroken parents. It served to confirm what Hollie had been saying for some time, “Archie is their prisoner and we have had all our rights taken away from us as Archie’s parents”, they want to render us disarmed powerless bystanders. 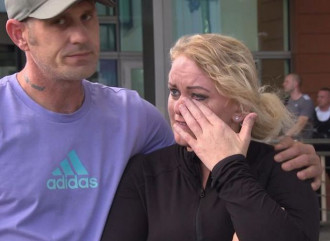 But, Hollie never appeared weak nor a powerless bystander. Even when Archie was abandoned by every legal institution in his home country and by those specific international entities, ECHR and UN CRPD (United Nations Committee on the Rights of Persons with Disabilities), which boast their conventions protect the rights of the disabled and vulnerable and guarantee justice is inclusive and equal for all, she talked about the “fight till the bitter end”. And when the legal onslaught dealt defeat after defeat, she braced herself for the next bitter round. At press conferences Hollie, flanked by close family or friends, appeared like Boudicca stoic and defiant, flouting the odds.

It was also Hollie who commanded the forces who had joined Archie’s cause through her Facebook page: Archie’s Official Army (spreadthepurplewave). Managed by trustworthy friends, it kept hundreds of thousands of followers updated on Archie’s progress over the last four months with daily messages, comments, videos, photos and media articles about Archie’s life as a patient in the Royal London Hospital. When, outraged friends and followers wanted to gather outside the hospital and protest, it was Hollie to calm troubled waters. On the first occasion she wrote, “please don’t, we don’t want protests, we want prayers for Archie”. The last post of the day on 3 August read, “We DO NOT advocate any form of protests at the hospital, [when Archie’s life support is withdrawn] Archie would never have wanted anything of the sort, so please do not present at the hospital as you will be asked to leave by security.” This morning 6 August, she invited her army to gather in silence outside the hospital while Archie was put to death.

Yet, death is not the end of Archie and won’t be the last we see of Hollie Dance and her army. She has vowed to build Archie Battersbee’s legacy. Hollie has already put plans in place with the support of her local MP Anna Firth to raise awareness to online challenges and social media trends that can permanently damage children. Another post on the Facebook page read, “Anna Firth is also keen to work with Archies Army to get an Archie’s Army Law drawn up where families in Hollie’s and Paul’s situation can get more help to explore every avenue of care for their child before being taken to court and having their rights removed, Archie’s Army Law will also look into the regulations surrounding Brain Stem Death testing and seeing if it can be brought up to date”.

No one could have fought harder than Hollie Dance and Paul Battersbee did for their son. That much at least is Hollie Dance’s remaining comfort. “I know I did everything I could,” she says. “Everything.”