Archie Battersbee’s brief life is in its last hours

There is no hope left for Archie Battersbee now that the British Supreme Court, has rejected the last appeal to save him from the doctors who claim death in his "best interest": at 11am his life-support will be detached despite the announcement of a last-ditch attempt to appeal to the European Court of Human Rights. A "brutal and shameful" sentence, states Hollie Dance, the brave mother of the 12-year-old in a coma since April 7. “I will still fight until the last minute for my son".
UPDATE 1:00 PM: Barts Health Trust: No changes until the outstanding legal issues are resolved.
UPDATE 10:00 PM - Last-ditch appeal to European Court is rejected 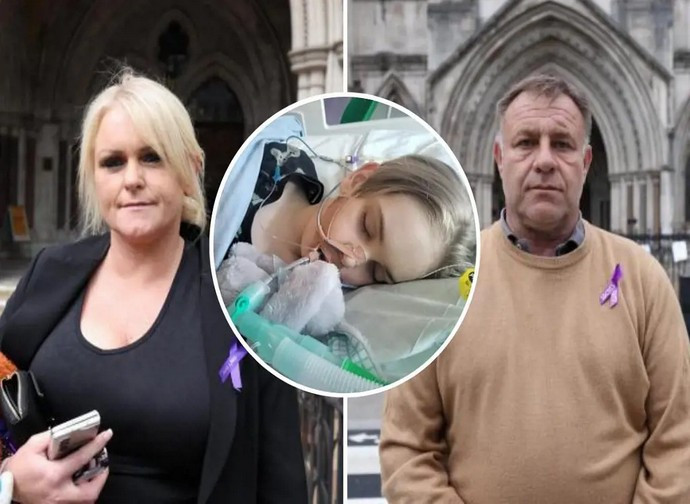 UPDATE 10:00 PM - APPEAL TO EUROPEAN COURT IS REJECTED
The European Court of Human Rights have declined the last-ditch plea to save the life of Archie Battersbee. Strasbourg court have rejected the eleventh-hour application from the 12-year-old's parents, Hollie Dance and Paul Battersbee, and said it 'would not interfere' with the decisions of UK courts that life-support treatment should be withdrawn from the youngster.

UPDATE 1:00 PM: STATEMENT BY BARTS HEALTH NHS TRUST
Dear all,
Please see below our latest statement regarding the AB case:
Alistair Chesser, Chief Medical Officer for Barts Health NHS Trust, said: "Our deepest sympathies remain with Archie's family and we aim to provide the best possible support to everyone at this difficult time. As directed by the courts, we will work with the family to prepare for the withdrawal of treatment, but we will make no changes to Archie's care until the outstanding legal issues are resolved."

“They are executing my son, but I did say for Archie I would fight to the bitter end and I mean it.” This is Hollie Dance’s first comment after the Supreme Court’s rejected the family’s petition to appeal against the High Court ruling of 2 August, which permits her son's, Archie Battersbee, life-support treatment to be stopped. It means the family has now exhausted all their legal rights of appeal in the UK. But Archie’s family stated last night, their lawyers intend to make one last desperate appeal to the European Court of Human Rights before the new deadline fixed by the Royal London Hospital to withdraw Archie’s life-support takes effect on 3 August at 11:00. Hollie admits, it’s a shot in the dark.

Hollie also told the Daily Compass what happened the moment after the judges’ decision to reject their petition became public. “Doctors at the Royal London Hospital couldn’t wait to call me and Paul Battersbee, Archie’s father, to a meeting to discuss the protocol for Archie’s planned death as described in the letter the hospital gave us last Saturday evening”. She says, “the family were informed no more time was to be lost and that Archie’s life-support treatment would be removed on 3 August at 11:00. The meeting was very tense, there was no compassion, no consideration for our requests” for what we would like and what we know Archie would want, like take him to a hospice to die peacefully and not here”.

Archie Battersbee, 12, a potential mixed martial arts champion, was left in a coma after a domestic accident last April. His mother believes the youngster’s traumatic brain injury was caused by an online challenge gone wrong. Now, Hollie regrets the day her son was transferred from the local hospital in Southend to the Royal London Hospital for more specialist care. She claims that since that day, her son has been made “a prisoner of the hospital” and that she has been systematically “excluded from every decision concerning his welfare and treatment”. Instead, after refusing to concede to the doctors request from the third day to donate her son’s organs and from the second week to terminate his life, she has been forced fight her way through the courts to keep Archie alive.

The protracted legal battle which began last May, finally concluded on 2 August with an appeal to the Supreme Court due to an urgent “interim measures” injunction to the UK government from the United Nations UN Committee on the Rights of Persons With Disabilities (UN CRPD). It was a last-ditch attempt to gain time to stop Archie’s life-support being withdrawn while the UN Committee examined Archie’s case. But, a panel of three judges, ruled that the Court of Appeal was correct on 1 August when it rejected the injunction because the Convention was an “unincorporated international treaty” and “not part of the law in the United Kingdom. They also stated “that if the court was to cede to the parents’ application, the court would be acting contrary to Archie’s best interests” which is obviously an immediate planned death. Whereas, lawyer James Bogle told the Daily Compass, “it’s a disgrace the UK is not honouring their Treaty obligations, if the courts can say a matter of best interest overrides international law then these treaties are not worth the paper they’re written on”.

The critical focus of Archie Battersbee’s case has always been about time and determining exactly how brief Archie’s life should be. Lord Hodge who presided over the hearing, alongside Lords Kitchin and Stephens when announcing the court's refusal to hear the appeal said: “the central issue between Archie's parents on the one hand and the NHS trust, which is supported by Archie's very experienced guardian, has not been about Archie's recovery but about the timing and manner of his death”. At the same time he recalled Mr Justice Hayden’s statement on 25 July, “there is no prospect of any meaningful recovery. Even if life-sustaining treatment were to be maintained, Archie would die in the course of the next few weeks through organ failure and then heart failure”. The maintenance of the medical regime, “serves only to protract his death”. But Hollie can’t understand the logic of their argument. If doctors are so sure Archie will die at any moment but without doubt very soon, why can’t he be allowed to die naturally in God’s way, she insists. At this point, it could be argued that prematurely suppressing the life of any terminal patients could appear on the surface an act in their best interests when in reality it’s euthanasia through the back door.

For Hollie, being terminally ill or being in a vegetative state or seriously disabled changes nothing. She loves Archie and wants to love him until his natural death. “I carried Archie for 40 weeks and gave birth to him, I am his mother, yet I have been treated as if I was only a babysitter for the state. Instead of trusting me, they have asked a court appointed guardian to decide my sons best interests.” “The doctors have never proved my son is brain dead only that it is highly likely he is brain dead. How can a boy who is attempting to take breaths on his own be dead?”

It’s not difficult to understand Archie's mother’s, harsh words last night after the Supreme Court judgement, which she defined as "brutal and shameful". Hollie also denounced the haste with which the doctors of the Royal London Hospital wanted to kill her son: "It’s been the hospital’s way from the word go, just "push push push, we need this done immediately". "It’s got to be at rapid speed, we actually execute this child — and with the backing of the legal system it’s been very easy for the hospital to do that, and I just think that it’s disgraceful, it’s absolutely shameful.

In fact, the problem is not only the hospital Trust, but the system which, in fact in recent years - as we have seen - has eliminated Charlie, Isaiah, Alfie and many others in the same way: “Is this the direction our country wants to take? Allow the execution of children who are disabled? What is the next step?”.