The Nativity, Marconi, and a painter named Christus

One of the most interesting paintings of the birth of Jesus is by Petrus Christus, a member of the 'second generation' of Flemish painting. The subject of an exceptional transaction, it was the first painting in history whose photograph was transmitted by Marconi cable from England to America. 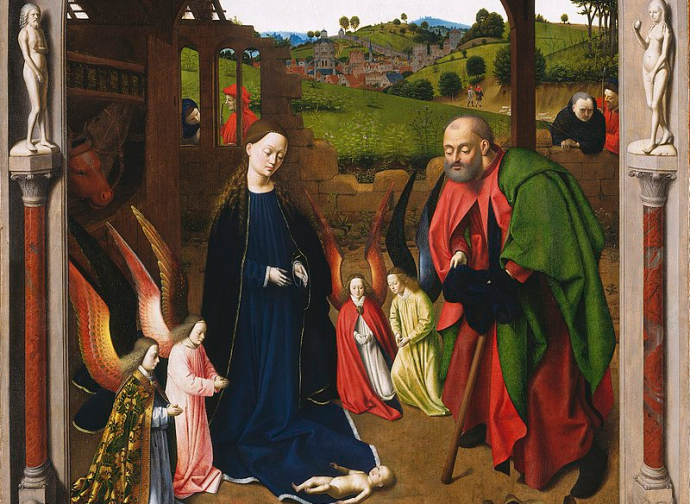 Among the most interesting paintings of the Nativity of Jesus, one in particular has attracted the attention of this writer because of its unique story. Let us start with the creator: the Flemish Petrus Christus, who was born in Baarle-Hertog in about 1410 and died in Bruges in about 1475. He belonged to the so-called 'second generation' of Flemish painting, after the first generation of the founders, Jan van Eyck, Rogier van der Weyden, and Robert Campin.

The biography of Petrus Christus is rather sketchy, as can be inferred from the imprecise dates of his birth and death. It is not even known what his real name was (Petrus Christus was construed from his signature, 'Petr. XPI'). The catalogue of his works is also very uncertain and is the result of much research and deduction: it has been reconstructed on the basis of the eight paintings that have survived, dated between 1446 and 1457, which bear his signature. In total, the catalogue contains 40 pieces, among which is an extraordinary 'Virgin Nursing the Child’: works showing the Virgin Mary nursing her Son are extremely rare. 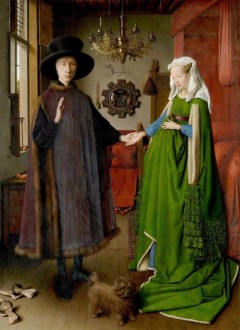 The first documentary traces of the artist can be found in the registry office of the city of Bruges, where we read that the artist and his wife became citizens of that city on 7 July 1444. In the historical documents of the House of Counts of Estampes, the contract binding the artist to this great family is mentioned in 1454. In 1458, Petrus Christus was a member of the Confraternity of Our Lady of the Dry Tree, one of the most prestigious associations of the time, whose members included the Dukes of Burgundy and the Italian bankers active in Bruges: the Arnolfini (the couple portrayed by Jan van Eyck in 1434, see photo) and the Portinari. Petrus Christus is considered to be the spiritual heir of Jan van Eyck, whose pupil he most probably was: he mastered the art of space, volume and environment with the same mastery (even if his manner reveals the influence of other great Flemish artists of his time: Dirk Bouts, Robert Campin and Rogier van der Weyden).

There is an interesting hypothesis that he was responsible for the completion of a Madonna by van Eyck, left unfinished after the latter's death, now in the Frick Collection in New York, but we have found no documents to support this supposition. Christus' links with Italy were manifold, as he had important Italian (especially Tuscan) clients. After 1450 his paintings took on a monumental tone, inspired by the great works of van der Weyden. He became the civic painter of the city of Bruges and in this role also executed numerous ephemeral works, such as ceremonial apparatuses and various decorations, such as those for the wedding between Charles the Bold and Margaret of York (1468). 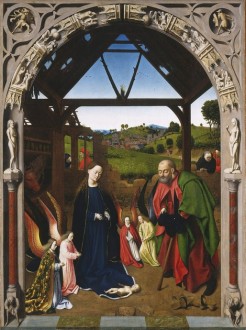 The Nativity is the last painting that the artist executed before the transition to this new artistic phase and is one of Christus' most complex and important works. It is an oil painting on a wooden panel measuring 127.6 cm × 94.9 cm, which is unusually large for a single panel painting from the Netherlands in the 15th century. The painting is now in the National Gallery of Art in Washington, to which it was donated by the financier-philanthropist Andrew Mellon (1855-1937) of Pittsburgh in the mid-1930s. It was one of 126 paintings from his personal collection donated to the gallery and was exhibited at the museum's opening in March 1941, four years after his death.

Documentary research has revealed that the painting belonged to Mrs O. Yturbe of Madrid, who sold it in 1930 to Franz M. Zatzenstein, founder of the Matthiesen Gallery in Berlin. The Duveen brothers, less affected by the stock market crash of 1929 than other dealers, paid Zatzenstein £30,000, in cash, for the painting and immediately sold it to Mellon for a much larger sum.

And here the story intertwines again with Italy. A dealer would usually take several months to sell a painting to an American buyer: he would first send photographs of the painting by transatlantic ship and then wait for a response. The transaction for the Nativity was exceptional because it was the first painting in history whose photograph was transmitted by Marconi cable from England to America. In order to avoid the export taxes that would have been due if the painting had been shipped directly to New York, the Duveens took a circuitous route: from Madrid to Germany, then to Paris and America. In 1936 it was acquired by the AW Mellon Educational and Charitable Trust and donated to the National Gallery a year later.

Given its size, the panel was probably intended to stand alone, but it may have been conceived as the wing of an altarpiece or part of a triptych. We do not know who commissioned the work or how it came to be in the possession of a Spanish owner. At least half of the known patrons of Christus were Italian or Spanish, and the artist often modified his style to suit their taste. At least eight of his paintings come, in fact, from Italy or Spain, lending credence to speculation that he spent time in both countries. However, the existence of the flourishing export market in early Dutch panel painting equally suggests that it could have been painted in Bruges and transported south at a later date.

The characters depicted in the painting are very interesting. Facing each other, Mary and Joseph are depicted as bourgeois of the city of Bruges, dressed in simple clothes, both in peaceful and gentle contemplation of events. The characters in the background are engaged in conversation and seem uninterested in the events. The Child, similar to a doll, is lying on the hem of Mary's robe, who looks at him tenderly. In the background, behind a green valley and in front of a blue mountain range, a village appears in a landscape dotted with hills. It seems contemporary with the painting, except for the domes that symbolise Jerusalem and thus prefigure the Passion of Christ. Passion that the Son of God suffered for all of us.