The first nativity scene was the living one by St Francis

We are in the Christmas period with its the nativity scene. Traditionally, nativity scenes were animated. They have an 'inventor', St Francis of Assisi, who re-enacted the Nativity in a cave in Greccio, immediately after his return from the Holy Land. A Franciscan pontiff, Nicholas IV, commissioned Arnolfo di Cambio to create the first inanimate nativity scene. 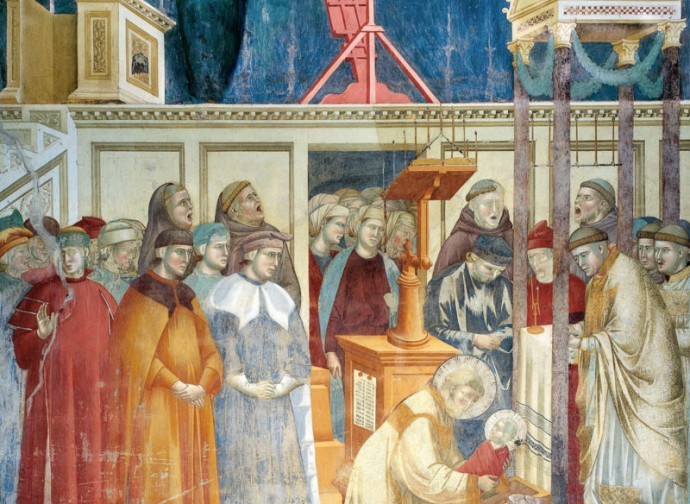 We are in the Christmas period and the most heartfelt homage to the Nativity is the crib. Traditionally, nativity scenes were animated. They have an "inventor", St Francis of Assisi, no less. He had returned from the Holy Land in 1220 with images of the birthplace of Jesus still in his heart: Bethlehem. He thought of it often, lost in the memories of those unique emotions he had felt while walking in the Lord’s footsteps.

And one day, during his wanderings in the local villages, he was surprised to discover a place so similar to Bethlehem. It was the hamlet of Greccio, a small village perched on the mountain 750 metres above sea level, on the slopes of Mount Lacerone (currently in the province of Rieti, on the border with Umbria). An enchanted place, surrounded by woods full of ferns and oaks, whose origins are rooted in myth. Francis even identified a grotto there, similar to that of the Holy Land. So he decided to re-enact the Nativity there.

Legend has it that Greccio was founded by a Greek colony exiled from their homeland. The place was chosen for its splendour, as well as for its geographical position in strategic terms. Its 750 metres above sea level were an excellent natural defence. It is said that the original name was Grecia, and then became Grece, Grecce and finally Greccio. It was there that the 'poor man of Assisi', after obtaining permission from Pope Honorius III, decided to re-enact the birth of Jesus.

In the representation created by St Francis, unlike the later ones, the Virgin Mary, St Joseph, and the Baby Jesus were not present. Mass was celebrated in the grotto with a portable altar placed over a manger near which were the two animals remembered by tradition, namely the donkey and the ox. We owe the first description of the living nativity set up by St Francis to Thomas of Celano (1190-1265), a Franciscan friar, writer, and poet, and author of two Vitae of St Francis. In the first Vita he gives us a more detailed description of the night on which the first crib was set up at Greccio, an account that is later taken up by Bonaventure of Bagnoregio in the Major Legend:

"The friars gathered, the people flocked; the wood echoed with voices, and that venerable night became resplendent with lights, solemn and resounding with harmonious lauds. The man of God [Francis] stood before the manger, filled with devotion, bathed in tears, overflowing with joy. The solemn rite of the Mass was celebrated above the manger and Francis sang the Holy Gospel. Then he preaches to the people around him and spoke of the birth of the poor King whom he [...] called 'the Child of Bethlehem'. A virtuous and sincere knight, who had left the militia and had become very attached to the man of God, Sir John of Greccio, claimed to have seen, inside the manger, a beautiful sleeping child that the blessed Francis, holding him with both arms, seemed to awaken from sleep". (Bonaventure, Legenda maior, XX).

Bonaventure's description is the source that Giotto used to compose the ‘Crib of Greccio’ fresco in the Upper Basilica in Assisi. The vision that appeared to the 'virtuous man', Messer Giovanni, was the first miracle linked to the living nativity scene in Greccio. The second extraordinary event is represented by the miracles that occurred through the hay that was placed on the manger on Christmas Eve. In the surrounding area, many animals suffering from various diseases were cured after eating this hay, and women who were suffering a long and painful birth gave birth happily by placing some of the hay on themselves. Men and women who attended the event and had been suffering from various ailments were also cured that night.

It is certainly worth visiting Greccio and discovering its charm, which so inspired St Francis, the creator of the first animated nativity scene. The first inanimate nativity scene in history was commissioned by Pope Nicholas IV in 1288 to the brilliant Tuscan sculptor Arnolfo di Cambio, who perfected his skills at the workshop of Nicola Pisano. Arnolfo di Cambio, also known as Arnolfo di Lapo (Colle di Val d'Elsa, c. 1245 - Florence, 8 March between c. 1302 and 1310), was an Italian sculptor, architect, and urban planner active in particular in Rome and Florence at the end of the 13th century and the beginning of the following century.

His nativity scene features the three Wise Men worshipping the Baby Jesus together with St Joseph. The statue of Mary, carrying the Child in her arms, is actually a 16th-century statue, although, following a recent restoration, it has been possible to assume that the work is the original statue partially re-sculpted in the 16th century. It is also interesting to note that Arnolfo only finished in great detail the parts visible to the viewer; the more hidden parts are only sketched. Arnolfo probably made the first plastic representation of the Nativity scene, sculpting eight statuettes representing the characters of the Nativity and the Magi in 1291. The surviving sculptures of the first nativity scene in history, initially placed in a chapel dedicated to the Nativity in the right aisle of the Basilica of Santa Maria Maggiore in Rome, are now located in the crypt of the Sistine Chapel named after Pope Sixtus V, also in the Basilica of Santa Maria Maggiore.

Nicholas IV, born Girolamo Masci (Lisciano, 30 September 1227 - Rome, 4 April 1292) was one of the leading figures in medieval culture. His name is associated with the Universities of Montpellier, Gray, Ascoli, and Macerata, but also with the erection of the Cathedral of Orvieto and the restoration of the basilicas of San Giovanni in Laterano and Santa Maria Maggiore as part of a project to adapt the liturgy and Marian iconography of the West to that of the East, in the indomitable hope of the reunification of the two Churches. He was also responsible for the re-foundation of the city of Cagli in 1289, which is believed to have been designed by Arnolfo di Cambio. According to various scholars (such as Bellosi, Brandi, and Nicholson), his pontificate is linked to the commissioning of Cimabue and Roman painters to decorate the Upper Basilica of St Francis in Assisi, testimony to the favour that the place enjoyed with him. In 1292, the first Franciscan pope commissioned the first marble nativity scene from Arnolfo di Cambio for the Basilica of Santa Maria Maggiore in Rome and from the goldsmith Guccio di Mannaia the splendid chalice in gold, gilded silver, and translucent enamels, a true masterpiece of Italian goldsmithing, as a tribute to the Basilica of Assisi.

Artists such as Arnolfo di Cambio, Pietro Cavallini and Iacopo Torriti worked for Nicholas IV. From that moment on, the custom of inanimate nativity scenes spread throughout the Christian world. Traditionally, the nativity scene is displayed until the day of the Epiphany, when the statuettes of the Magi are placed in front of the Holy Family, or even until Candlemas, in Italy and in other countries.