The Eucharist: true Body born of the Virgin Mary

"Ave verum Corpus natum de Maria Virgine" (Hail,  O true Body, born of the Virgin Mary). These are the words of the famous Eucharistic hymn that reminds us of the special bond that exists between the Son of God and His Mother Mary. As, Benedict XVI explained, Mary "was the living 'tabernacle' of the Eucharist." St. John Paul II recalled the inseparable union between the Incarnation and the Eucharistic mystery. Mary's "yes" guarantees that the Christian faith is not some vague spiritualism, because from her womb, the Body, the true Bread of Life, is born. 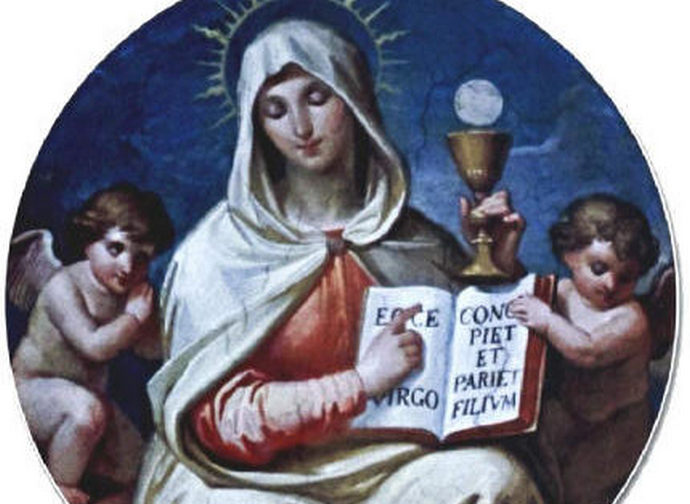 Eucharistic adoration has led to the composition of countless hymns, antiphons and motets in honour of the Blessed Sacrament. Texts and music have flourished throughout history, from the Church’s inception until today. One of the most renowned musical hymns is undoubtedly the  Ave verum written by Wolfgang Amadeus Mozart. However, many composers have set the relatively short but dense text to music:

Hail, true body,
born of the Virgin Mary:
Truly suffered,
died on the cross for mankind:

From who pierced side
flowed water and blood!
Be for us a foretaste
of death in the last hour!

The text, of late medieval origin, has been commented on and set to music several times over. Particularly noteworthy is this intimate association between the Son and the Mother, a tight bond that is affirmed at the beginning and at the end of the verses. During the Angelus of 25 May 2008, Pope Benedict XVI said: "Dear brothers and sisters, the feast of Corpus Christi is an occasion to grow in this concrete attention to our brethren, especially the poor. May the Virgin Mary obtain this grace for us, from whom the Son of God took flesh and blood, as we repeat in a famous Eucharistic hymn, set to music by several great composers: "Ave verum corpus natum de Maria Virgine", and which concludes with the invocation: "O Iesu dulcis, o Iesu pie, o Iesu fili Mariae!". May Mary, who bearing Jesus in her womb was the first living "tabernacle" of the Eucharist, communicate to us her same faith in the holy mystery of the Body and Blood of her divine Son, so that it may truly be the centre of our life.”

Benedict XVI also spoke of how the verses had been set to music by the greatest composers. I would like to mention an Ave verum written for a mixed choir and organ accompaniment that gained well-deserved notoriety around the world. It is that of the English composer Colin Mawby (1936-2019), the former choir master of Westminster Cathedral and a friend of mine for many years. Sadly, given the state of Catholic church music, Colin Mawby’s hymns are not as well known and performed as they deserve given his endless repertoire to choose from! Mayby’s Ave Verum is probably his best known piece, with its beautiful modern harmonies but ever singable and with great emphasis on the hymn’s words.

I remember talking to him often about this piece and how he was virtually "tired" of it, since it seemed to everyone that he had only composed this particular hymn . In reality, as I stated, he was the author of a great repertoire of sacred music. I remember a meeting with him in Macao, where we talked about his childhood and his mother, whom he had lost when he was very young. At that meeting he was already an old man, but the memory of his mother made him weep. Perhaps it was this emotion that inspired him to write the music for these verses in which, the Son and Mother are closely intertwined between Birth and Passion.

St. John Paul II, during an Angelus he led in Seville on 13 June 1993, said: "Ave verum corpus natum de Maria Virgine! At this moment of the Angelus, when the People of God recall the Annunciation to the Virgin Mary and the mystery of the Incarnation, the faith and piety of the Church focus on Christ:, the son of the Virgin Mary, the Light of the Gentiles, present in the Blessed Sacrament of the Eucharist, offered to the Father as the glorious victim of reconciliation in the sacrifice of the new and everlasting covenant, and given to us as the Bread of Life. In writing his Gospel, St. John wanted to unite the revelation of the Eucharistic mystery and the commemoration of Christ’s Incarnation. Jesus is the Living Bread who came down from heaven for the life of the world (cf. John 6:51). The Word became flesh and dwelt among us. This brings us to the Annunciation, when the Angel of the Lord communicated the Good News to Mary, who, by her free and loving consent, conceived the Word in her womb by the power of the Holy Spirit."

In his book Ipotesi su Maria (On the Hypotheses of Mary), Vittorio Messori stated: "With the inroads made in these chapters, I would like to show what I myself have experienced: without the root of the flesh, that is, without the body of that woman Mary, the whole mystery of the Incarnation loses its indispensable materiality and becomes a vague form of spiritualism, sermonising moralism or, worse yet,  a dangerous ideology". In short: ad Iesum per Mariam.