The Hindu nationalist BJP (Indian People’s Party) that returned to power with an emphatic victory in 2019 is in jitters following unprecedented protests over the controversial Citizenship Amendment Act, a move to deny citizenship to Muslim refugees. The church too joined the chorus of protest, because the discrimination on the basis of religion envisaged in the Citizenship Act and NRC is against secularism and democratic values 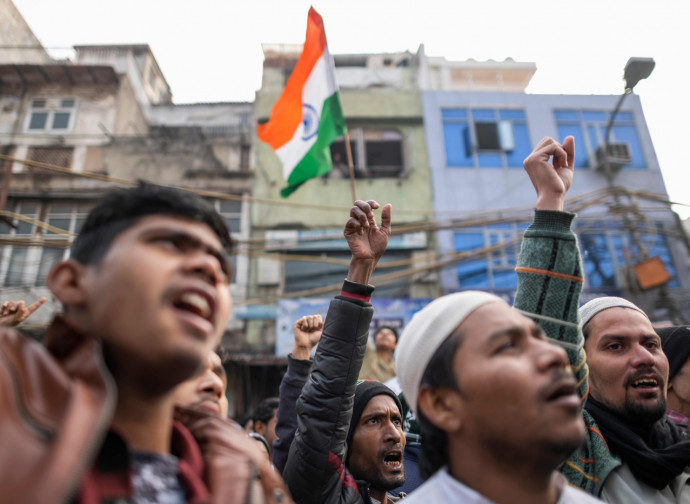 The Hindu nationalist BJP (Indian People’s Party) that returned to power with an emphatic victory in 2019 is in jitters following unprecedented protests over the controversial Citizenship Amendment Act the BJP government passed in the Parliament amid the euphoric declaration of National Register of Citizens (NCR) to follow.

As the protesters, led by university students across the nation, poured on to the streets against the move to deny citizenship to Muslim refugees, the government tried to use brute force to quell the protests. The protests spread across the country after the police illegally gate-crashed into Delhi's Jamia Millia University and beat up even female students in the night. As the protests spread like wild faire, police fired at protesters claiming two dozen lives and almost all of them in BJP-ruled states. Despite state police chiefs denying shooting at protesters, internet is galore with police firing handguns, setting fire to public buses to blame the protesters and ransacking hospital rooms looking for protesters.

As the protests gained momentum charging the BJP government of striking at the ‘soul of India’ marked by religious harmony and equality guaranteed under the Constitution, the church too joined the chorus of protest. “The discrimination on the basis of religion envisaged in the Citizenship Act and NRC is against secularism and democratic values,” decried the Catholic Bishops Council of southern Kerala state, India’s largest Christians stronghold, in a press statement on December 18. Next day, several prominent Catholics including Jesuit Father Cedric Prakash and outspoken lay activist John Dayal were among thousands of protesters who were detained by the police across the nation.

“We express our solidarity with the students and others who have been grievously injured and pray for their speedy recovery,” said the statement signed nearly 200 Christian leaders even as church hierarchy remained silent. The signatories to the statement included Father George Pattery, head of the South Asia conference of Jesuits as well as non-Catholic networks like Evangelical Fellowship of India. The controversial legislations passed by the Parliament since the BJP returned to power in May, the statement noted, led to the collapse of the democratic institutions of India built “carefully and painstakingly” by “enlightened leaders” over the last seven decades. “The new law (Citizenship Amendment Act - as it is known)”, the Christian lamented, is “deeply divisive, discriminatory and violative of human rights. This legislation discriminates against Muslim communities in India, who constitute over 14 percent of the population of India, and therefore, it is totally unacceptable in a secular democratic republic of India.”

“The letter and spirit the Constitution, framed by men and women who had participated in the freedom struggle, cannot be thrown out at the whims of a particular ideology. We are deeply saddened at the haste in which the President of India gave his assent (to the bill),” the statement added. Feeling the heat of the protests, Prime Minister Narendra Modi adopted a mellowed tone and claimed that the law will not discriminate against Indian Muslims when he addressed a rally in Delhi on December 22. Further Modi also said. “I want to tell the 130 crore (1.3 billion) Indians that from 2014 till now, nowhere there has been any discussions or talk on the word ‘NRC’ (National Register of Citizens – asking each one to prove his citizenship with documents).” However, the media lost no time in bringing out the declaration of his belligerent home (interior) minister Amit Shah who had declared in the Parliament during the passage of the Citizenship (Amendment) Bill that a countrywide NRC would indeed be implemented.

“We will ensure implementation of NRC in the entire country. We will remove every single infiltrator from the country, except Buddha, Hindus and Sikhs,” the media also cited April twitter post from the BJP’s official Twitter handle. Such blatant claim by Prime Minister Modi provoked The Telegraph, one of the critical national English dailies’ to come out on December 23 with a blunt headline: ‘Just who are you calling a liar, PM?’. With the protests gaining momentum, the brutal police crackdown on the protesters in Mangalore on the west coast of BJP ruled southern Karnataka state three days earlier did not deter over a 100,000 gather in Bangalore, capital Karnataka state, to protest the draconian law on Monday (Dec 23).

The BJP regime stung by the unprecedented protests had a double whammy in store on the same day when the results of the election to Jharkhand tribal state assembly was announced. The ruling BJP could win only 25 of the 81 seats while the opposition Congress party with its allies snatched power from the BJP in the tribal heartland. The BJP’s defeat in Jharkhand is indeed a Christmas gift for the church as the Hindu nationalist government had used all the state machinery at its command to frame keep an elderly Missionaries of Charity nun in jail on trumped up child trafficking charge. That is apart from several other Christians including a Jesuit principal confined to languish in jail on concocted criminal charges.