Contrary to what many people think, St Francis of Assisi was not a vegetarian and invited his friars to use “all foods people eat”. But his favourite dish was shrimp pie, and he also loved some sweets such as almond ‘mostaccioli’.
- THE RECIPE: SAINT FRANCIS’ SHRIMP AND PIKE PIE 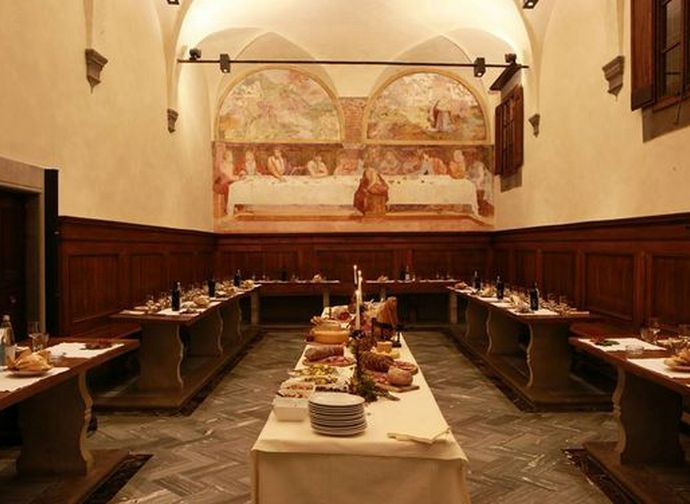 We continue our journey into “tasting” the recipes of the monasteries, remaining in the Middle Ages for the moment.

A fascinating age for many reasons, one of which is the burgeoning of pilgrimages: spiritual journeys, undertaken out of devotion (or penance) to places considered sacred. They were sometimes relatively short journeys (for example to a nearby sanctuary), but could also be extremely long, as from Rome to Jerusalem. Pilgrims could not be sure that they would ever return from these journeys, so, before leaving, they paid their debts, made peace with the people with whom they had quarrelled, drew up wills, but above all they confessed and gave gifts to the Church.

In that period there was also a massive penetration by the Cathars and the Waldensians among the humblest classes (especially in Italy and in the South of France), fascinated by their their pauperistic propaganda.
This is the background against which the mendicant orders were born, perhaps as a response of the Church to the action of those religions.

In fact, in the 13th century we also see a burgeoning of important religious orders and a surprising expansion of the mendicant orders, which constitute the great novelty of that period. And not only because they were almost all born in the 13th century, but because they became part of the life of the Church. This was how the Augustinians, the Carmelites, the Dominicans, and the Franciscans were born.

They have in common the fact that their original rule imposed the vow of poverty and the renunciation of all property not only for individuals, but also for the monasteries, which drew sustenance solely from the collection of alms.
Furthermore, in the 13th century, older contemplative orders, such as the Hermits of Saint Augustine and the Carmelites, also became mendicant orders.

The Franciscans and Dominicans, with their rigour and absolute poverty, gave the Catholic orthodoxy decisive help to combat heretical preaching on equal terms and bring the pauperistic movement back into the Church, also thanks to the support of Popes Innocent III and Honorius III.

Their contribution to the development of theological and philosophical thought in the Latin Middle Ages was fundamental. High Scholasticism was elaborated by the great minds that came from these very orders: Albert the Great and Thomas Aquinas were Dominicans, while Bonaventure of Bagnoregio and John Duns Scotus were Franciscans. The friars of these orders soon dedicated themselves to teaching and spiritual direction: they were advisors to the poor and the wayfarers who stayed in their monasteries for the night, but also to kings and princes.
Their founders had extraordinary human and spiritual life stories. A shining example is Francis of Assisi (1181 - 1226), born Giovanni di Pietro di Bernardone, with one of the most extraordinary stories of conversion. From his pampered life, a little over-indulged by his mother, this great party-lover, who also had a past as a fighter, after an illness turned his life around and embraced absolute poverty, inspiring his followers to do the same.

His relationship with food is very interesting. Many assume that he was a vegetarian, but he was definitely not.

In fact, one reads in the “Regula non bullata” (Rule Without a Bull) of the Franciscan Order, composed around 1221 (i.e. the rule approved only orally by Innocent III, which prescribed to individual friars and the Order to live the love of Christ and neighbour in absolute poverty and joyful freedom):

“And let one make known clearly his wants to another, in order that he may find and receive what are necessary for him. And let everyone love and nourish his brother as a mother loves and nourishes her son, in so far as God gives them grace. And ‘let not him that eateth despise him that eateth not; and he that eateth not, let him not judge him that eateth’. And whensoever a necessity shall arise, it is lawful for all the brothers, wherever they may be, to eat of all food that all people can eat, as our Lord said of David, who “did eat the loaves of proposition, which was not lawful to eat but for the priests”.

An episode that sees the friars gathered around Francis is emblematic, with Brother Morico asking whether they were allowed eat meat, since that year Christmas fell on a Friday. Francis replied: “You sin, brother, calling the day on which the Child is born to us a day of fast. It is my wish that even the walls should eat meat on such a day; and if they cannot, they should atleast be smeared with grease on the outside”.

Of course, Francis was frugal and did not like waste. The “Regula non bullata” continues like this:

"Remember that the Lord says, ‘Watch yourselves lest your hearts be weighed down with dissipation and drunkenness and cares of this life, and that day come upon you suddenly like a snare upon all who dwell on the face of the earth’. Likewise, again, in time of manifest necessity all the brothers should provide for their necessary things as the Lord will give them grace, for necessity has no law".

Living on alms, he accepted what was given to him, but Francis also had a favourite dish: shrimp pie. He also enjoyed pike, a freshwater fish, which he ate whenever the occasion arose.

He ate herbs, roots, cereals, but also bread and focaccia, soups, cheese, pork and sea or freshwater fish. And he didn't disdain sweet delicacies, such as mostaccioli, made with almonds, flour, grape must and honey, which he liked to nibble on when he happened to have them.

Francis' poverty had an aura of joy, which also inspires and stimulates our contemporaries.