Saints Rufina and Secunda (†257) were two sisters, both betrothed, who put God first and suffered martyrdom during Valerian's persecutions. Their names are mentioned in several ancient documents... 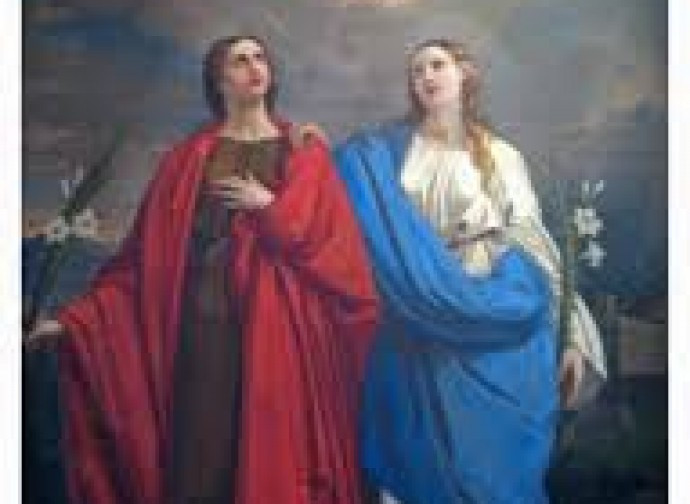 Saints Rufina and Secunda (†257) were two sisters, both betrothed, who put God first and suffered martyrdom during Valerian's persecutions. Their names are mentioned in several ancient documents, such as the Jeromian Martyrology (written in the 5th century, based on earlier sources) and the Marmoreal Calendar of Naples (engraved around the 9th century). This attests to the importance of the cult of the two saints, in whose honour a basilica had already been erected in the 4th century, with work begun at the behest of Pope Julius I (337-352).

Tradition reports that Rufina and Secunda had been promised by their father to two young Christians. The latter, at the raging of the persecutions commanded by Valerian (who in 257 had promulgated the first of his two edicts against Christianity), repudiated their faith and tried to convince their two fiancées to do the same. But Rufina and Secunda refused to abjure. They decided not to marry the two apostates and consecrated their virginity to Christ. They then tried to leave Rome, but were caught at the 14th mile of the Via Flaminia by the men of Archesilaus, after having been denounced by their two suitors. They were then taken to Gaius Junius Donatus, praefectus urbis in 257, who tried to induce them to deny Christ. The two women were subjected to various interrogations and tortures, in the face of which they remained steadfast in their faith.

The prefect gave them back to Archesilaus, who took them to a wood called Silva Nigra, along Via Cornelia. Here Rufina was beheaded, while Secunda was beaten to death. The bodies of the two martyrs were abandoned in the woods. They soon received worthy burial thanks to a Roman matron named Plautilla, to whom the two sisters had appeared in a dream, indicating the place of their martyrdom and exhorting her to conversion. Silva Nigra was then renamed by the faithful Silva Candida, for the devotion and miracles attributed to the intercession of Rufina, Secunda and other martyrs, such as Saints Peter and Marcellinus (†304), who were killed in the same forest a few decades later, during Diocletian's persecutions.

The basilica commissioned by Saint Julius I, the remains of which are difficult to identify today, was erected on the tomb of the two saints and became the episcopal seat. The first known bishop is attested from 501 (Adeodatus, who in that year participated in a synod). In the same century, there is the name of Valentine, which the sources report both as episcopus ecclesiae Silvae Candidae, from the toponym linked to the diocese, and as episcopus a sanctae Rufina et Secunda, in reference to the martyrial basilica that stood there. In 1119 Pope Calixtus II united the diocese of Selva Candida with that of Porto, forming the suburbicarian see (so called because it is suffragan of the diocese of the City of Rome) of Porto-Santa Rufina. During the pontificate of Anastasius IV (1153-1154) the relics of Rufina and Secunda were transferred into the Lateran Baptistery. And since then they have been kept there, in a chapel that bears their name.