Saints Philip and James the Lesser 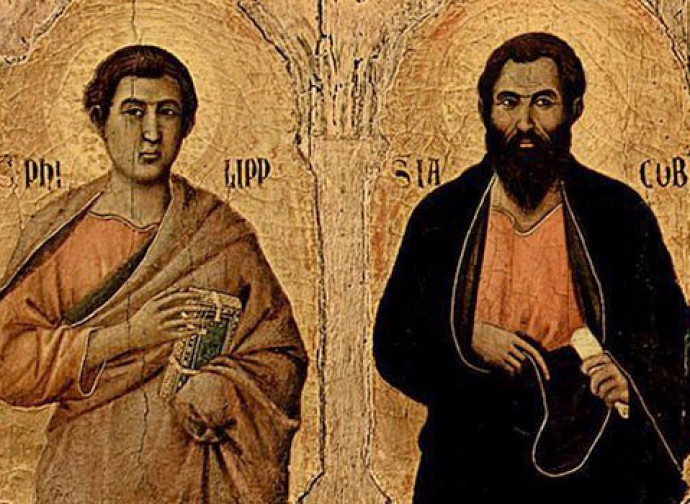 SAINT PHILIP (c. 5 - 80). Philip was from Bethsaida, the same city as Andrew and Peter. He was among the first apostles to meet Jesus, who said to him: “Follow me”. That first encounter left its mark on the heart of Philip, who as soon as he saw Nathanael (i.e. Bartholomew), told him enthusiastically:  “We have found him of whom Moses in the Law and also the prophets wrote, Jesus of Nazareth, the son of Joseph.” And it is significant that to that first scepticism of his friend (“Can anything good come out of Nazareth?” Bartholomew asked), Philip immediately replied: “Come and see”. (Jn 1, 43-51).

He was then quoted in the dialogue with Jesus on the occasion of the multiplication of the loaves and fishes (Jn 6:1-15). At the Last Supper, while the Son of God is gradually revealing the Trinitarian mystery (in which the apostles will be able to enter only after the Resurrection and receiving the Holy Spirit), it is Philip who asks: “Lord, show us the Father and that is enough for us”. Jesus' answer is well known: “For a long time I have been with you and you have not known me, Philip? He who has seen me has seen the Father”.

After Pentecost, Philip crossed Asia Minor and, according to some apocryphal sources (taken from the Golden Legend of Jacopo da Varagine), he went on to evangelize Scythia. What is certain is that the first Christians already attested his death and burial in Hierapolis, in Phrygia. And it is here that between 2008 and 2015 Italian archaeologists identified the remains of a basilica built around the tomb of the apostle, with numerous inscriptions attesting to the ancient cult attributed to him. In Hierapolis, a city that housed a pagan oracle, Philip made many conversions and died a martyr, nailed upside down to a tree or an X-shaped cross.

SAINT JAMES THE LESSER (c. 5-62). He is so called to distinguish him from James the Elder, brother of Saint John the Evangelist and martyred around 44. From the New Testament we learn that he was the son of Alphaeus, father also of another apostle, St Judas Thaddeus. The historian Hegesippus (c. 110-180) reports that Alphaeus was the brother of Saint Joseph and therefore James was a cousin of Jesus: in this sense Paul calls him “brother of the Lord” (Gal 1:19; see also Mt 13:55 and Acts 12:17), according to an expression often present in the Old Testament to indicate close relatives. On the basis of the traditional Catholic interpretation - corroborated by the comparison between the Holy Scriptures and the texts of some ancient authors such as the already mentioned Hegesippus and Flavius Josephus (c. 37-100) - James the Lesser and James the Just, first bishop of Jerusalem, are the same person.

James played a very important role in the early Church, so much so that Paul pointed him out among “the pillars” together with Peter and John (Gal 2:9). At the Council of Jerusalem, held around 50 to resolve the dispute over circumcision, he made an important contribution in support of Peter's speech. He quoted the prophet Amos to overcome the resistance of the Jews and proposed a solution for the converted Gentiles (Acts 15:7-21). He is also responsible for the Letter of James, where he exhorts the faithful to ask God for true wisdom and stresses the need for good works alongside faith: “What good is it, my brethren, if one says he has faith, but has no works?”.

He suffered martyrdom in 62. The scribes and Pharisees asked him to deny Jesus from the pinnacle of the Temple so that he could be heard by all. But James, according to Hegesippus' extensive account (reported in the Church History by Eusebius of Caesarea), said: “Why do you question me about the Son of Man? He sits in heaven at the right hand of the Most High and will come on the clouds of heaven”. Many believed his words. Then the scribes and the Pharisees threw him off the pinnacle, crying, “Oh! Even the Just One was wrong”.

Because James was still alive, he was stoned and finally struck on the head with a stick, while he asked God to forgive his executioners. The sensation produced by the martyrdom was such that several Jews came to attribute the subsequent siege of Jerusalem and the destruction of the Temple (70 AD) to the injustice committed against the saint. In his Antiquities of the Jews, Flavius Josephus, a native of Jerusalem, wrote on the subject: “All this happened to the Jews to punish them for what they did to James the Just, who was a brother of Jesus, called the Christ, and was killed by the Jews despite the fact that he was just”.