The saints remembered today were the first to suffer martyrdom for refusing to take the oath to the Act of Supremacy of 1534, which declared King Henry VIII supreme head of the Church of England. These were the Carthusian Protomartyrs John Houghton, Robert Lawrence and Augustine Webster and the Brigidine monk Richard Reynolds, all martyred on 4 May 1535. 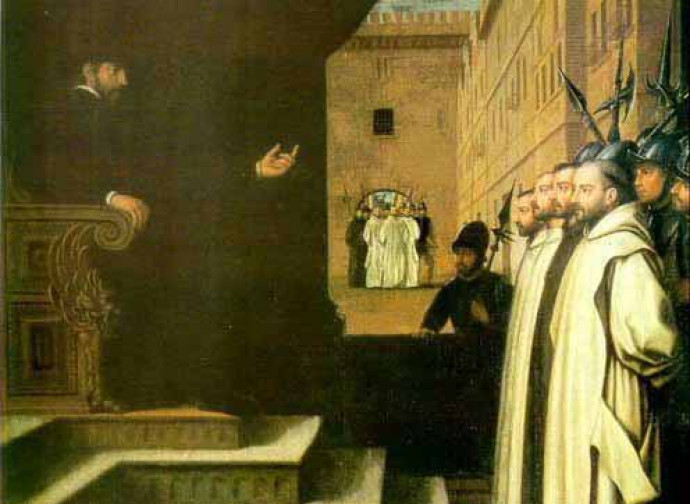 The saints remembered today were the first to suffer martyrdom for refusing to take the oath to the Act of Supremacy of 1534, which declared King Henry VIII supreme head of the Church of England. These were the Carthusian Protomartyrs John Houghton, Robert Lawrence and Augustine Webster and the Brigidine monk Richard Reynolds, all martyred on 4 May 1535. The four are part of the group of the “Forty Holy Martyrs of England and Wales”, religious and lay people, men and women of different social backgrounds but united by the Catholic faith, who offered their lives as witness to Christ at different dates and times (between 1535 and 1679). Paul VI canonized them all together on October 25, 1970. The 40 are only a part of the hundreds of recognized martyrs, including saints and blesseds, who were also victims of the anti-Catholic persecutions that followed the Anglican Schism.

After his illegitimate second marriage to Anne Boleyn and the new Act of Succession, Henry VIII tried to obtain the consent of his subjects, starting with those who had the greatest influence on the people. One of his first objectives was the Charterhouse of London, known for the austerity of the monks' lives, where John Houghton was prior. He asked that his community be released from the obligation to swear the oath to the new law, which demanded the annulment of Henry's marriage (never dissolved by the Pope) to Catherine of Aragon. The exoneration was not granted and therefore Houghton was imprisoned in the Tower of London together with his brother Humphrey Middlemore (he too would be martyred). The two Carthusian monks were released a month later, in May 1534, after having been convinced of the reconcilability between the oath and Catholicism, because of the clause “as far as permitted by the law of Christ”. The whole Carthusian monastery took the oath, in the presence of a large armed contingent.

The problem arose again the following year when the religious were asked to accept the king's supremacy over the English Church, thus disavowing the authority of the Pope. Houghton and two other Carthusian priors, Robert Lawrence and Augustine Webster, asked to be released from that unacceptable oath, but Thomas Cromwell had them locked up in the Tower of London. In the same period Richard Reynolds, a Brigidine known for his holy life and erudition, was captured: he was a scholar of Hebrew, Greek and Latin and his monastery kept 94 of his writings. Reynolds, at the trial of April 28, 1535, declared: “To be at peace with my conscience and with those who are present here with me, I declare that our faith has greater weight and is supported by greater testimonies than yours, because instead of the few testimonies that you have obtained from the Parliament of this kingdom alone, I have the entire Christian world on my side”.

On 4 May the religious were led from the Tower of London to the Tyburn gallows, near the present Marble Arch. From his prison cell another future martyr, Saint Thomas More, observed the scene and said to his daughter: “Look, Meg, these blessed Fathers are going towards death as joyfully as bride and groom to their wedding!”. Houghton was the first to suffer martyrdom: hanged, drawn and quartered, according to the procedure reserved for those condemned for high treason. Before the rope finished choking him, he was pulled down, and when the executioners began to cut open his chest, he prayed, “O Jesus, what will you do with my heart?”. This was followed by the execution of the other companions of martyrdom, among whom was also Blessed John Haile, a priest in Isleworth, the same suburb where Reynolds’ monastery was located. The latter, as Cardinal Pole would say on the basis of an eyewitness account, “offered his head to the hangman’s noose as if to receive a royal necklace rather than an instrument of death”.

The body parts of all five martyrs were displayed in different parts of London to terrorize Catholics. But many others would follow their example, professing to the last the only faith in Christ.

Extract from the Homily by Paul VI for the canonization of the 40 martyrs of England and Wales.