On the same day as Saint Valentine, bishop of Terni, martyred in Rome, the Church celebrates the feast of the brothers Cyril and Methodius, evangelisers of the Slavic peoples and proclaimed patrons of Europe by John Paul II with the apostolic letter Egregiae Virtutis (31st December 1980). 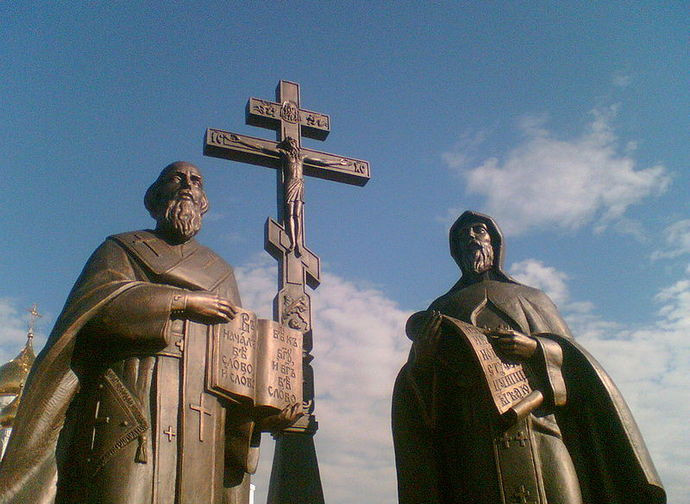 On the same day as Saint Valentine, bishop of Terni, martyred in Rome, the Church celebrates the feast of the brothers Cyril and Methodius, evangelisers of the Slavic peoples and proclaimed patrons of Europe by John Paul II with the apostolic letter Egregiae Virtutis (31st December 1980). To the two saints, the Polish pope also dedicated the encyclical Slavorum Apostoli (1985; the second, after Leo XIII's), where he says: "Cyril and Methodius are as it were the connecting links or spiritual bridge between the Eastern and Western traditions, which both come together in the one great Tradition of the universal Church.  For us they are the champions and also the patrons of the ecumenical endeavour of the sister Churches of East and West, for the rediscovery through prayer and dialogue of visible Unity in perfect and total communion[...]. Unity is a meeting in truth and love, granted to us by the Spirit".

Cyril and Methodius were born in Thessaloniki of a noble family. The father was the droungarius, i.e., a military governor of the city, where there was a strong Slavic presence; hence the brothers' familiarity with the Slavic language. Methodius (ca. 815 / 820-885), the elder, obtained the position of archon, which he soon abandoned to retire to a monastery in Bithynia. Constantine, who later took the religious name of Cyril (ca. 827-869), studied philosophy and theology in Constantinople. He displayed an unusual linguistic talent, speaking  Arabic, Hebrew and Syriac in addition to Greek and Slavic. He received holy orders, and the patriarch of Constantinople employed him as secretary, but soon Cyril preferred to retire to a monastery on the Black Sea, where he lived a few months before returning to Constantinople to teach philosophy, which earned him the nickname "Philosopher".

The lives of Cyril and Methodius later reunited. The two brothers were entrusted with various missions, including the one that marked a turning point in their lives: Rastislav, Duke of Great Moravia, asked the Byzantine emperor Michael III for "a bishop and teacher [...] who could explain the true Christian faith" to his people in their native language. So, around 863, the two brothers arrived in a country which at the time included today's Czech Republic, Slovakia, Hungary and portions of Austria, Croatia, Germany, Poland, Romania, Slovenia, Serbia and Ukraine. They brought Bible texts which they had translated into ancient Slavic and written in a new alphabet invented by Cyril with the help of Methodius. The new alphabet was called Glagolitic (from glagol, "word"), from which are derived the Cyrillic characters (named after their inventor). The two brothers devoted all their talents and energies to the evangelisation of that country, patiently enduring a number of troubles, including misunderstandings with the German clergy.

Pope Nicholas I († 867), to whom they brought the relics of Saint Clement as a gift, summoned them to Rome to discuss the liturgical use of the Slavic language, soon convincing himself of the great value of their work. His successor Adrian II († 872) approved the Slavic liturgical books. During his pontificate, Cyril took religious vows and the monastic habit. He died in Rome on February 14th, 869. Methodius' apostolic activity continued. He was consecrated bishop of Sirmium in ancient Pannonia, but had to undergo two years of imprisonment, from which he was freed by the personal intervention of Pope John VIII. Even the new ruler of Great Moravia, Svatopluk, opposed him, insinuating doubts about his orthodoxy, but the meeting with John VIII completely rehabilitated him from all false accusations. He was thus able to continue his apostolate among the Slavs, until his death on April 6th, 885.

Being indebted to God