They are among the first great examples of Christian spouses, persevering in faith and united in joy and adversity. Saints Aquila and Priscilla (diminutive of Prisca) are known for their work in the nascent Church and the great help given to Saint Paul, who in his Letter to the Romans left us a beautiful eulogy of the couple... 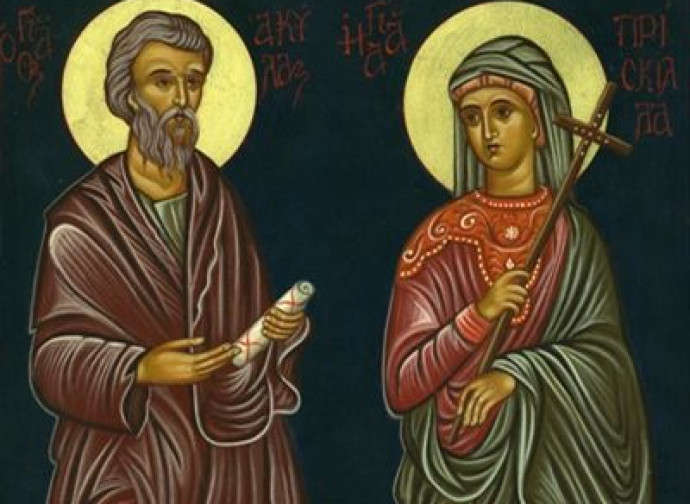 They are among the first great examples of Christian spouses, persevering in faith and united in joy and adversity. Saints Aquila and Priscilla (diminutive of Prisca) are known for their work in the nascent Church and the great help given to Saint Paul, who in his Letter to the Romans left us a beautiful eulogy of the couple: “Greet Priscilla and Aquila, my co-workers in Christ Jesus; to save my life they risked their heads, and to them not only I am grateful, but all the Churches of the Gentiles; greet also the community gathering in their house” (Rom 16:3-5).

Their home in Rome was therefore a domus ecclesiae (“house of the assembly” or “house of the church”), that is, one of those houses where the Christians of the first centuries gathered to pray, hear the Word of God and celebrate the Eucharist, before their freedom of worship was recognized by the Roman Empire in the edicts of 311 and 313.

The Acts of the Apostles introduces the figures of Aquila and Priscilla in chapter 18 (Acts 18, 1-3), where it speaks of Paul's arrival at Corinth during his second missionary journey (50-52 A.D.). Aquila was a Jew and together with his wife Priscilla had recently arrived in the Greek city from Italy. The couple had had to leave Rome by order of Emperor Claudius, who around 49 banned all Jews from the capital of the empire. According to Constantinopolitan Synaxarion (which commemorates them on 13 February as “apostles and martyrs”) they were baptized by Paul, but it is possible that Aquila and Priscilla were already Christians when they met him at Corinth, having benefited from the announcement of Christ in Rome. Here in fact, Saint Jerome reports, Peter had arrived for the first time “in the second year of Claudius”, that is in 42. In any case it is certain that in Corinth they hosted Paul in their house and the apostle went to great lengths to help them in what was their common profession, that is, making tents.

Aquila and Priscilla then settled in Ephesus, where Paul temporarily separated from them to continue his journey. During that time St. Apollos arrived in the city. He was the learned Alexandrian preacher who knew the Scriptures well and was fervently teaching everything in the Old Testament that mentioned the coming of Jesus, even though he had only received the baptism of John. It was the two spouses who instructed Apollos with greater precision on the way of God, encouraging his intention to leave for Achaia. Also at Ephesus, where Paul later returned, the house of Aquila and Priscilla served as a small domestic church for the Christian community, as the Apostle reported in writing to the Corinthians (1 Cor 16:19).

The couple lived through the uprising caused by the silversmith Demetrius, who made small temples of Artemis and therefore saw the numerous conversions to Christ as a threat to his business. Perhaps it was on that occasion that they saved Paul, who wanted to “present himself to the crowd” to calm it, but “the disciples did not allow him” (Acts 19:30). Aquila and Priscilla continued to move around: the couple settled for the second time in Rome and then, from the greetings in the Second Letter to Timothy, we learn that they returned to Ephesus (2 Tim 4:19).

In short, a married life that was a means of sanctification in work and faith, always at the service of the Lord and with the joy of sharing the riches they had discovered with others. As Benedict XVI said in a catechesis on the two saints: “One thing is sure: together with the gratitude of the early Church, of which St Paul speaks, we must also add our own, since thanks to the faith and apostolic commitment of the lay faithful, of families, of spouses like Priscilla and Aquila, Christianity has reached our generation. It could grow not only thanks to the Apostles who announced it. In order to take root in people's land and develop actively, the commitment of these families, these spouses, these Christian communities, of these lay faithful was necessary in order to offer the “humus” for the growth of the faith. As always, it is only in this way that the Church grows. This couple in particular demonstrates how important the action of Christian spouses is. […] Thus it was in the first generation and thus it will often be”.

And then the devil comes and takes away the word from their hearts (Luke 8: 12)