Vincent went to heaven on January 22nd, 304 (or 305). He is considered the first martyr in Valencia, a city which, according to Lorenzo Riber, was then little evangelised and highly pagan. 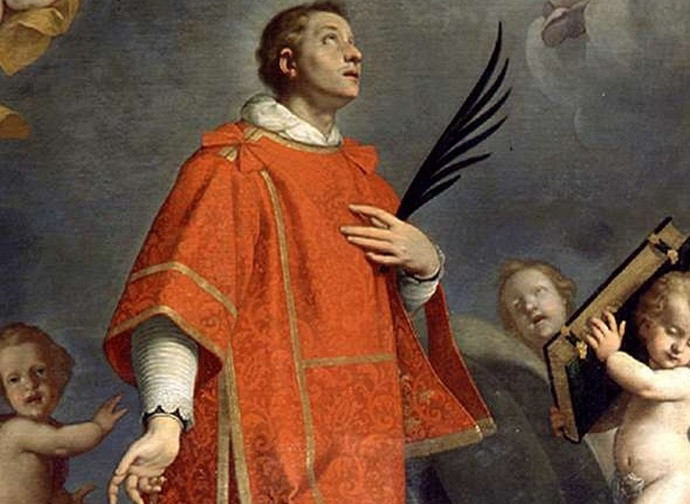 The faith and fortitude with which this great Spanish Saint faced martyrdom caused his fame to quickly spread throughout the early Christian world. As Saint Augustine (354-430) put it: "What is the district today, what is the province where the Roman empire and the name of Christ extend that do not joyfully celebrate the anniversary of the martyrdom of Saint Vincent?" Besides Augustine, Vincent's martyrdom was honoured in antiquity by Ambrose, Leo the Great and Isidore of Seville, while different biographies appeared, with three cities contending for his birth (Huesca, Zaragoza, Valencia): according to tradition, the most credited was his birth in Huesca, a city that boasts a church built on the site of his birthplace.

Vincent was born into a noble family, received a Christian education and later was sent to study in Zaragoza. Here the young man grew up in the Christian virtues under the spiritual guidance of Bishop Valerius, who was revered by the Church as confessor of the faith. At 22, the bishop appointed him deacon and entrusted him with the care of preaching, perhaps because of a speech impediment. He faithfully carried out his duties and, in due time, together with Valerius had to face persecutions under Diocletian, which from 303 had fiercely resumed with the burning of holy books, the destruction of churches, the prohibition for Christians to meet, including the inevitable obligation for them to honour false gods, which many people resisted.

The prefect Dacian, responsible for carrying out the imperial orders on Spanish soil, had Vincent and Valerius taken to Valencia, where the two Saints arrived on foot while being harassed by the soldiers, and then imprisoned and left for several days without food. When Dacian finally summoned them, he marvelled at their serenity and how their bodies enjoyed excellent health despite their prolonged fasting. Vincent explained to him: "Our faith is one. Jesus is the true God: we are His servants and witnesses. We fear nothing in the name of Jesus Christ, and you will sooner get tired of tormenting us than we will tire of suffering. Do not believe that we will bend either with the promise of honours nor with the threat of death because from the death you would give us we will find life.” Already enraged, Dacian ordered exile for the bishop and tested the the goodness of Vincent's words with a variety of tortures.

For the first torture, the Saint was stripped and tortured with ropes and wheels that dislocated his bones, but since it seemed too light a penalty to the prefect, he ordered iron hooks to tear his flesh. Invited to abjure, Vincent replied: "You are deceiving yourself, cruel man, if you think you are afflicting me by destroying my body. There is in me a free and peaceful being that no one can violate. You're trying to destroy a clay pot destined to break, but in vain will you strive to touch what is inside, which is subject only to God".

Increasingly deranged, Dacian tormented Vincenzo by burning him over a grill, but not even this could bend the resistance of the deacon, who was eventually taken back in chains to a prison whose floor had been covered with sharp stones and pottery shards to rub into his sores. Prudentius, who dedicated a hymn to the martyr in his Peristephanon, writes that at that point a heavenly light flooded the cell, the chains broke, the floor was covered with flowers and the saint died blissfully among the voices of angels who exalted him for his testimony.

Vincent went to heaven on January 22nd, 304 (or 305). He is considered the first martyr in Valencia, a city which, according to Lorenzo Riber, was then little evangelised and highly pagan. Vincent's martyrdom and faith in the risen Christ contributed greatly to the development of the young Church in that city, which venerates him as its patron.