A few decades before St. Francis of Assisi spent time there, Gubbio had known the virtues of St. Ubaldus (c. 1085-1160), who was bishop of the city for 31 years and helped to protect it from enemy attacks. He was born into the noble Baldassini family and lost his father when still a child. 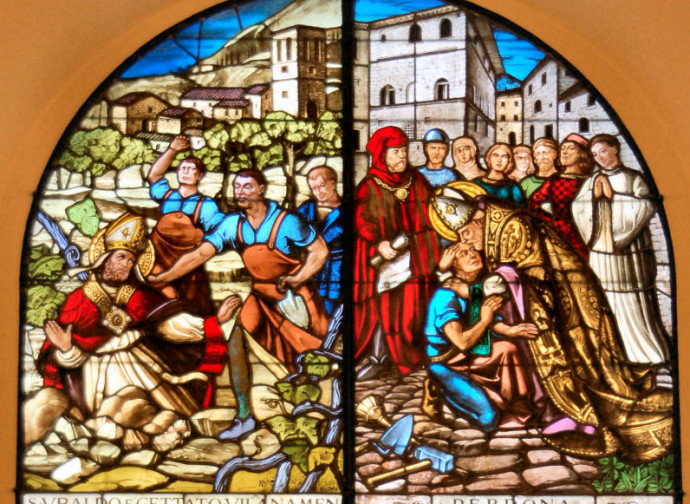 A few decades before St. Francis of Assisi spent time there, Gubbio had known the virtues of St. Ubaldus (c. 1085-1160), who was bishop of the city for 31 years and helped to protect it from enemy attacks. He was born into the noble Baldassini family and lost his father when still a child. He soon developed the desire to consecrate himself to God, distinguishing himself by his spirit of prayer and chastity, although there were many who tried to dissuade him from that kind of life.

Ubaldus knew how to combine gentleness of soul with determination, and his reputation as a holy man spread far beyond the borders of Gubbio. When the bishop of Perugia died, the clergy and people of Perugia wanted him as the new leader of the diocese, but the priest, not feeling worthy, fled and hid for some time in a hermitage. He then decided to walk to Pope Honorius II and beg him for forgiveness for refusing to be elected bishop. But later, when the bishop of Gubbio died, Honorius himself refused to listen to his pleas and had Ubaldus installed on the episcopal chair of his city. It was 1129 and the Pope's choice proved providential.

The saint, who never abandoned his austere life, dedicated himself to the reform of the clergy, patiently enduring the hostilities of his adversaries. He worked as a peacemaker and helped Gubbio, at that time an important city-state, to defend itself from the assaults of the enemy troops, first of all from the one organized in 1151 by eleven nearby cities. Ubaldus called the faithful to penance and urged them to invoke the Lord's help with confidence: for three whole days Gubbio was crossed by solemn processions, accompanied by sacred hymns and prayers, with men and women walking barefoot behind their bishop. He finally raised a supplication to God, asking for the liberation of the city "as you freed the children of Israel from the Egyptians". The siege was soon broken and the enemies fled.

Four years later Gubbio had to face the danger posed by Frederick Barbarossa. The emperor threatened to destroy Gubbio if he was not paid a sum that far exceeded the city's possibilities. The inhabitants then begged the intervention of Ubaldus, who, although ill and in bed, got up to meet Barbarossa. The emperor was struck by the holy bishop and asked him for a blessing: "May He who has granted you the imperial crown on earth - we read in the Life written by his confrere Giordano - grant you the heavenly kingdom in reward". The emperor gave thanks and ended the siege. When Ubaldus died, on May 16, 1160, the floods of the faithful coming to pay him homage were such that the funeral was celebrated only on the fourth day after his death. Celestine III proclaimed him saint in 1192.