“By blood, I am Albanian. By citizenship, an Indian. By faith, I am a Catholic nun. As to my calling, I belong to the world. As to my heart, I belong entirely to the Heart of Jesus.” The best presentation of St Teresa of Calcutta (1910-1997), known by all as Mother Teresa, could only be given by herself, the little nun who expanded her heart to embrace every man as her neighbour. 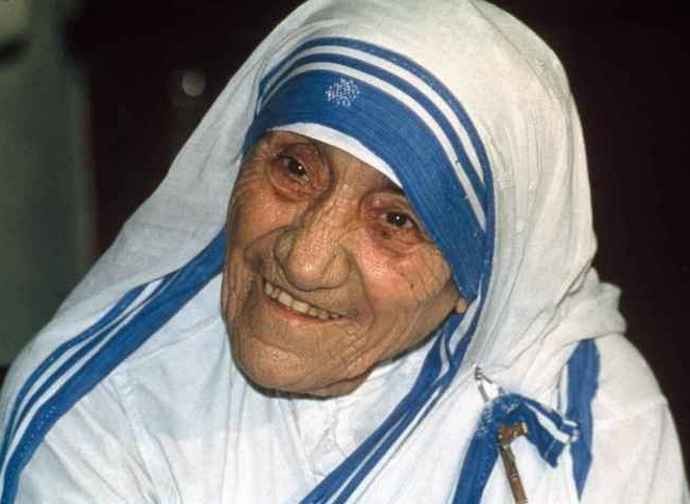 “By blood, I am Albanian. By citizenship, an Indian. By faith, I am a Catholic nun. As to my calling, I belong to the world. As to my heart, I belong entirely to the Heart of Jesus.” The best presentation of St Teresa of Calcutta (1910-1997), known by all as Mother Teresa, could only be given by herself, the little nun who expanded her heart to embrace every man as her neighbour. When asked what the secret of such charity was, she replied that she always remembered to look and draw from the spring: God. She explained the concept with a famous similarity. “When you read a letter, you do not think about the pencil it was written with. You think of the person who wrote the letter. This is exactly what I am in God's hands: a small pencil. It is God, Himself, who writes a love letter to the world in His own way, using my work”.

Agnes Gonxha Bojaxhiu was born in Skopje (today the capital of Macedonia) to Albanian parents who loved the Rosary and helped the needy. “When I think of my mother and father, I always remember when we were all together in the evening praying [...]. I can only give you one piece of advice: that you go back to praying together as soon as possible, because the family that doesn't pray together can't live together”. She lost her father when she was only eight years old and as an adult she decided to join the Sisters of Loreto. A few months later she was sent to India, where she took the religious name Teresa in honour of St Therese of the Child Jesus.

After professing her first vows, she taught for about 17 years in a boarding school in Calcutta (1931-1948), also becoming its head, but towards the end of that period something changed her life. On the evening of 10 September 1946, while travelling by train, she heard a call within a call: “That night I opened my eyes to the suffering and fully understood the essence of my vocation [...]. I felt that the Lord was asking me to renounce the quiet life within my religious congregation and go out into the streets to serve the poor. It was an order. It was not a suggestion, an invitation or a proposal”. So she decided to leave the convent and in 1948, having obtained the Holy See's approval, she began with five rupees her solitary life in the service of the “poorest of the poor”. Two years later, followed by 12 young women, she founded the Missionaries of Charity. Their number grew so rapidly that already in 1953 they had to move to a new location, made available by the Archdiocese of Calcutta.

Children and elderly people with disabilities, tramps, lepers, the mentally ill, orphans, prisoners, prostitutes, single mothers, drug addicts, men and women of every religion: all those excluded and who felt unloved by society began to find physical and spiritual comfort in Mother Teresa's congregation, which she dedicated “to the Immaculate Heart of Mary, cause of our joy and Queen of the world, because it was born at her request and thanks to her continuous intercession it has developed and continues to grow”. Through Mary, the saint wanted to bring Christ to the poor and the poor to Christ. A dying man - whom she had loved, cared for and cleansed of worms - said to her one day: “I have lived like an animal in the street, but I am about to die like an angel”. She taught us to direct our actions of charity beginning with our family, “those who live near us” and who are “poor”, but “not because of lack of bread” but because they do not seek God.

She spoke of the need to put Christ at the centre of our lives also in her memorable speech in 1979 at the Nobel Peace Prize ceremony, when she spoke clearly, among other things, about the drama of babies killed through abortion: “I feel that today the greatest destroyer of peace is abortion, because it is a direct war, a direct killing - a direct murder by the mother herself. [...] Because if a mother can kill her own child, there is nothing stopping me from killing you and you from killing me”. She did not fail to mention the immorality of contraception and the lawfulness of natural methods, always keeping in mind the beauty of divine designs on man.

The inexhaustible nun wearing the white sari with blue stripes spent at least three hours a day in prayer and adoration of the Blessed Sacrament, which were the driving force of all her charity. Contemplative and industrious. So once, meeting the then young Father Angelo Comastri, she asked him how many hours he prayed a day. Faced with the surprise of the future cardinal, who expected an exhortation to love the poor more, Mother Teresa, gazing at him with her penetrating eyes, explained: “My son, without God we are too poor to help the poor! Remember: I am only a poor woman who prays”.