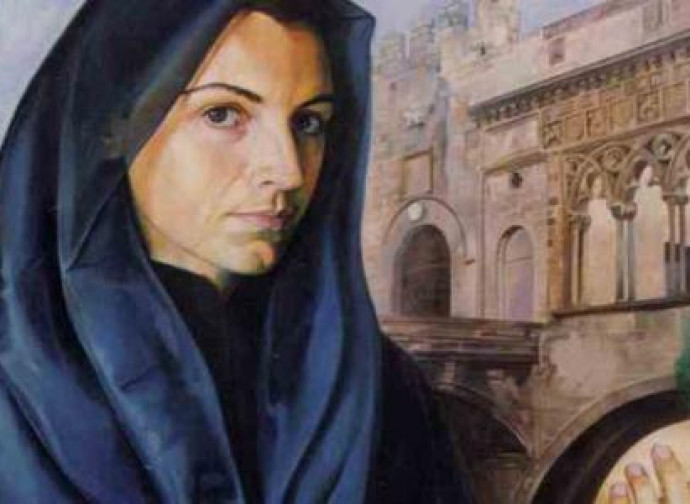 Born into a wealthy family in Viterbo, central Italy, the third of four children, Rosa was educated according to strong Christian principles, which in time would allow her talents to bear full fruit. At the age of seven she vowed to consecrate herself to God. In her early youth she experienced an inner conflict between her inclination for spiritual goods and the seductions of the world, which she managed to overcome through prayer and penance.  At the age of twenty she tried the monasterial way , but left a few months later because the death of her father led her to return home to comfort her mother, who would live another four years.

After a painful search for her vocation, Rosa reached a turning point. On the advice of her confessor, she began to invite the maidens and mothers of the neighbourhood to her home to pray the Rosary together. At those meetings she was able to notice the poor cultural and religious education of many women of the people. This gave her an insight into the mission to which God was calling her. On August 30, 1685, after renting a house and obtaining the bishop's approval, with the help of two teachers she founded her first free school, intended for the schooling and religious education of the poorest girls. It was the first real public school for girls in Italy. The beginnings were not easy, due to the resistance of a part of the clergy and above all some members high society. The saint suffered but did not yield, fortified by the spirit of prayer. “I feel so attached to the Will of God that I don’t care about death or about life, I just want what He wants, I want to serve Him as much as He wishes and nothing more”.

The support of the priests grew as they observed the cultural and moral growth of the young women. The fame of the institution spread beyond the borders of Viterbo. Cardinal Marcantonio Barbarigo, Bishop of Montefiascone, called Rosa to his diocese, materially supporting her for the foundation of about ten schools between 1692 and 1694 and establishing with her the Congregation of the Maestre Pie. The institute then took root in Rome. Here the foundress was able to open a school in the city centre, which on October 24, 1716 received the visit of Clement XI, accompanied by eight cardinals. The Pope asked to observe the lessons and at the end of the morning he said: “Mrs Rosa, you do what we cannot do; we thank you very much because with these schools you will sanctify Rome”.

Her saintliness was nourished by incessant contemplation. She used to say that mental prayer “is the nourishment of the soul”. In her meditations she would hear the words of Jesus, in particular those pronounced on the cross. Aware that the world rests on the Eucharistic Sacrifice, and driven by the desire to collaborate in the salvation of souls, she prayed to participate spiritually in all the Masses celebrated every day on earth. The motto “educate to save” of the Venerini Pious Teachers well encapsulated the spirituality of Saint Rosa, who exhorted her disciples to serve God in joy: “Dear Sisters, toil cheerfully and never tire of thanking the Eternal Love and the Supreme Good for having called us to such a holy ministry that is the Christian education of girls”.