Saint Pantaleon is one of the most famous figures to have witnessed to his faith in Christ with his martyrdom during the Great Persecution (303-305). He is the patron saint of midwives and co-patron of doctors together with the famous Cosmas and Damian. 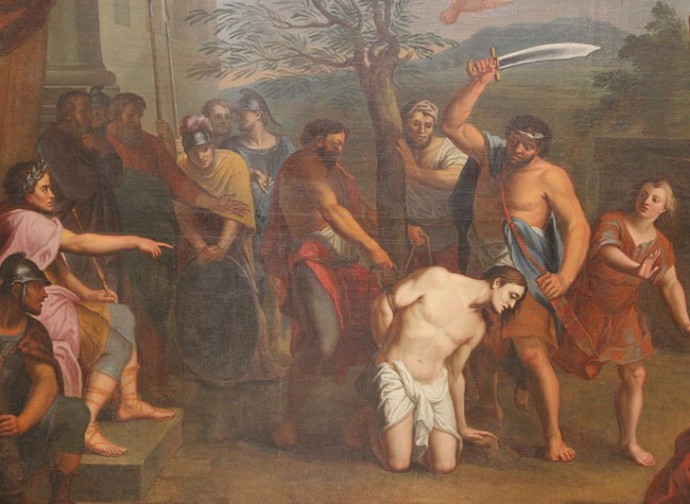 Saint Pantaleon is one of the most famous figures to have witnessed to his faith in Christ with his martyrdom during the Great Persecution (303-305). He is the patron saint of midwives and co-patron of doctors together with the famous Cosmas and Damian. He is part of the group of the so-called Anargyros Saints (a term of Greek origin that literally means “without money”), so called for having exercised the medical profession without asking for compensation. Moreover, as a result of a devotion that arose in Germany in the 15th century, his name was included among the 14 Auxiliary Saints, invoked by Christians for special needs (in his case, against infirmities caused by consumption), although their collective worship was suppressed with the 1969 calendar reform.

According to the hagiographic tradition, widespread since ancient times in several languages and versions, he was the son of Eustorgius, a rich pagan of Nicomedia. He was educated in the Christian faith by his mother Eubula. After the death of his mother, he began to distance himself from the Church. Under the guidance of the physician Euphrosinus he learned the medical art so well that he entered directly into the service of the emperor Maximinianus or, according to other sources, and more likely, Galerius, who was first designated Caesar (293-305) and then Augustus of the East (305-311). His return to Christianity was thanks to a priest named Hermolaus, who lived in hiding to escape persecution. Hermolaus praised his study of medicine, but convinced him to put Christ first: “My friend, what good are all your acquisitions in this art, since you are ignorant in the science of salvation?”.

Pantaleon converted his father after miraculously healing a blind man with the invocation of the name of Christ. On the death of his parent, he freed his slaves and distributed his goods to the poor. But the envy of some colleagues led to his denunciation to the emperor. The latter tried in various ways to make Pantaleon apostatize, but failed to do so and condemned him to death, branding all the miracles he performed as an exhibition of “magic”. After several attempts to kill him, thwarted by as many prodigies, the Passio reports that the torturers managed to behead him only after having obtained Pantaleon’s consent. Meanwhile, he had implored forgiveness for his persecutors and a voice from above had imposed on him the new name of Panteleimon, which in Greek is equivalent to “he who has compassion of all”.

The antiquity of the cult of Saint Pantaleon, beyond the sometimes embellishing hagiographic versions that spread later, is attested by the writings of Theodore of Cyrus (c. 393-458; Graecarum affectionum curatio, Sermo VIII, De martyribus) and Procopius of Caesarea (c. 490-565; De aedificiis Justiniani) and by his commemoration in the Martyrology of St Jerome. The Cathedral of Ravello houses an ampulla with the blood of Pantaleon, whose annual liquefaction was also witnessed by St. Alfonso Maria de' Liguori.

Several cities boast of owning part of his relics. Among these is Venice, where the martyr of Nicomedia has enjoyed great devotion since the Middle Ages and which preserves one of his arms in the church of San Pantalon (as the Venetians call the saint).