Saint Norbert (c. 1080-1134), founder of the Premonstratensian Order, was born into a family belonging to the high nobility and close to the court of the Holy Roman Empire. His father was Count of Gennep, in present-day Holland, but Norbert had been educated in nearby Xanten, on Germanic soil... 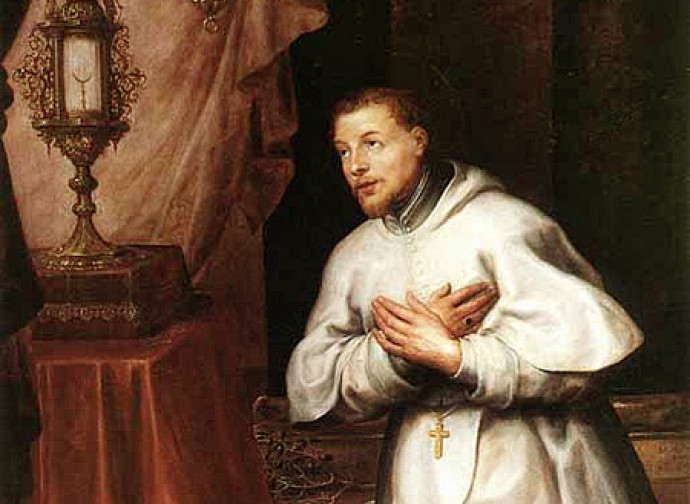 Saint Norbert (c. 1080-1134), founder of the Premonstratensian Order, was born into a family belonging to the high nobility and close to the court of the Holy Roman Empire. His father was Count of Gennep, in present-day Holland, but Norbert had been educated in nearby Xanten, on Germanic soil. It was the period in which the Church was implementing the Gregorian Reform, so called because of its most illustrious exponent, Saint Gregory VII (c. 1015-1085).

Norbert, perhaps without having a real vocation, began his ecclesiastical career, being ordained a sub-deacon and becoming Henry V's chaplain. For about thirty years he was mostly attracted to the worldly life, until an event in 1115. As he rode towards the city of Vreden a lightning bolt caused him to be thrown from his horse and for about an hour he was unconscious on the ground.

After the danger had passed, his faith grew stronger. He gave up his position at court and began a life of penance. He founded a first abbey and was ordained a priest, while in the meantime his love for the Eucharist and his devotion to Our Lady were increasing. He tried to reform the chapter of the canons of Xanten, but his attempts failed, perhaps also because of the excessively harsh asceticism he had tried to establish. After donating all his goods to the poor, he went to Saint Gelasius II, who gave him permission to work as an itinerant preacher. He carried out this mission between Belgium, France, Germany and Holland, urging conversion and admonishing the clergy itself, especially for disregarding the rule of celibacy.

The bishop of Laon then asked him to found a religious order in his diocese, giving him land in the forest of Voas. Norbert chose to adopt the Rule of St. Augustine and on 25 December 1120, together with thirteen disciples, took solemn vows at Prémontré: thus was born the Premonstratensian Order, whose members are also called Norbertines. In the act of donation the place was called with the Latin Praemonstratus, in the possible sense of “(Place) Indicated (by God)”, according to a Life written by St. Gottfried of Cappenberg (Venit ad locum vere juxta nomen suum, a Domino premonstratum, electum and prædestinatum). The latter was a count who had been impressed by Norbert's preaching and had left everything to join the Premonstratensians.

In 1126 Norbert was appointed bishop of Magdeburg by Honorius II, the pope who approved the order with the bull Apostolicae disciplinae. The saint continued his work also in the exercise of the episcopal ministry. He was attacked for having tried to restore ecclesiastical discipline, which had become too relaxed. In the schism that occurred in 1130, he supported Innocent II against the antipope Anacletus II. In the last years of his life he was chancellor and advisor to the emperor Lothair of Supplimburg. He died with a reputation for holiness on 6 June 1134. His body, since 1627, rests in the Strahov Monastery in Prague.

Learn more: St Norbert and the Order of Canons Regular of Prémontré website