It is difficult to say which has been greater, the reputation of holiness that he enjoyed while still alive or the devotion to him after his death. Of Saint Nicholas (c. 270-343) it can be recalled first of all that he was born to wealthy Christians in Patara, in Lycia. 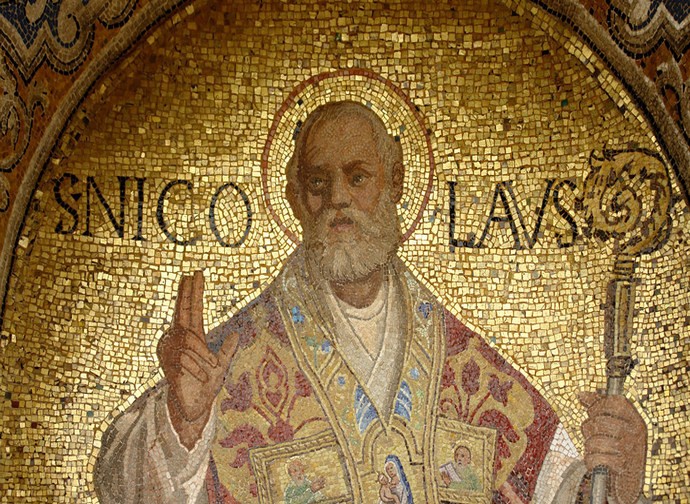 It is difficult to say which has been greater, the reputation of holiness that he enjoyed while still alive or the devotion to him after his death, connected to the many miracles and examples of charity told about in the hagiographies and represented in the icons, which have made him very popular all over the Christian world and especially in the High Middle Ages, when he was even cited by Dante in the Divine Comedy. Of Saint Nicholas (c. 270-343) it can be recalled first of all that he was born to wealthy Christians in Patara, in Lycia, and according to some sources he was left prematurely orphaned by both, inheriting a substantial estate that he would later distribute to the poor.

He moved to nearby Myra (today corresponding to the Turkish Demre), which is the setting of the episode on account of which he is often depicted with three golden balls, in remembrance of a grand gesture that unites wisdom, disdain toward sin, and love of neighbor. Nicholas found out about a nobleman who had fallen into poverty, and despairing of the possibility of getting his three young daughters married had insinuated to them the idea of prostituting themselves. The saint decided to help those persons and one night he went to their home. Through a window grating he dropped a cloth full of gold coins. After seeing that the father had used that money well, organizing the marriage of the oldest daughter, Nicholas repeated the work of charity a second and a third time, when finally the downtrodden nobleman - keeping a lookout - succeeded in discovering the identity of his benefactor, celebrated in the verses of Dante on “… the largess which Nicholas unto the maidens gave, in order to conduct their youth to honour.”

At the death of the bishop of Myra, Nicholas was chosen as the new leader of the Christian community. Under the persecutions of Diocletian he was first imprisoned and then exiled, because from prison he continued to urge the Christians to be firm in their faith and not to offer sacrifices to the false pagan divinities. He was released from prison following the freedom of worship obtained by Christianity with the edicts of 311 and 313, resuming his intense apostolic activities. Of course he opposed Arianism, which at the time was the most widespread heresy. Tradition reports that Nicholas participated in the Council of Nicaea in 325 (his name does not appear on certain lists of council fathers but is present on the list of the Byzantine historian Theodorus  Lector, held to be correct by some scholars), where he is said to have struck Arius while listening to the heretic - whose ideas were condemned by the council - continue to blaspheme by bringing into doubt the divinity of Christ.

From the figure of Saint Nicholas, venerated among other things as a protector of children, there developed over time the myth of Santa Claus, which spread rather rapidly after colonists from the Netherlands brought to New York (originally called New Amsterdam) the devotion to the ancient bishop of Myra, with the Dutch name of Sinterklaas, which turned into the modern Santa Claus. The title “of Bari” is instead due to the transfer to the Apulian capital of many of his relics, which took place in 1087, when an expedition succeeded in taking possession of roughly half of the skeleton (the largest bones) which until then had been kept in the cathedral of Myra, a city that in the meantime had fallen into the hands of the Muslims. A few years later the Venetians found smaller fragments of bone, kept in another area of the same cathedral, which an inquiry conducted at the end of the twentieth century confirmed as being “complementary with the bones kept in Bari.”