Together with Saint Placidus, he was the most famous disciple of Saint Benedict of Nursia (480-547). Most of the information about Saint Maurus is found in the biography of the great monk and patron of Europe as told in the second book of Dialogues by Pope Gregory the Great (540-604). 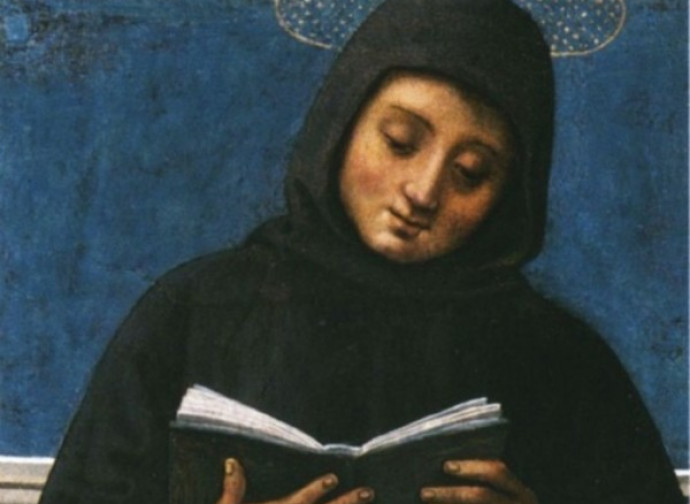 Together with Saint Placidus, he was the most famous disciple of Saint Benedict of Nursia (480-547). Most of the information about Saint Maurus is found in the biography of the great monk and patron of Europe as told in the second book of Dialogues by Pope Gregory the Great (540-604). At the beginning of his Life of Saint Benedict, Gregory mentions four of Benedict's disciples as his sources. So from the Dialogues we learn that Maurus' father was a Roman nobleman named Eutychius, who had entrusted to Benedict his adolescent son who "had holy habits".

Maurus is mentioned in several passages from Saint Gregory's account, the best known of which tells that Benedict had ordered Maurus, from his cell, to help Placidus who had fallen into the lake: the young man immediately ran towards his brother, entered the lake walking on the water and brought Placidus back to shore. Realising what he had just done, Maurus told Benedict, who attributed the prodigy to the prompt obedience of the disciple, who, for his part, believed that the miracle had happened only thanks to the holy master's command. To resolve this dispute of humility, Placidus said: "As I was saved from the water, I saw the abbot's cloak over my head and felt that it was he himself who was pulling me out."

In the 9th century Abbot Odo of Glanfeuil published a Life of Saint Maurus, claiming to have drawn it from the account written by Faustus, another disciple of Benedict. According to that, Maurus had founded the monastery of Glanfeuil, the first Benedictine one in Gaul, after being sent across the Alps by the master in the company of Faustus and ten other monks. The village where the abbey once stood (it was dissolved in 1908), was later called Saint Maurus on the Loire.

Among the other known dedications to the Saint, the Congregation of Saint Maurus must be remembered.  Founded in 1618, this Benedictine institute spread rapidly throughout France: its members, called "maurins", distinguished themselves for their erudition and made a substantial contribution to historiography, philology, and the study of patristics. Monks such as Jean Mabillon, the founder of palaeography, and Bernard de Montfaucon, considered one of the fathers of modern archaeology, operated in the Maurine monasteries. The congregation was suppressed by the supporters of the French Revolution; the last Superior General was killed, together with 40 other monks, on September 2nd, 1792, in one of the massacres that followed the decision of many religious not to lend oath to the civil constitution of the clergy, by which the revolutionaries intended to subject the Church to the State, in their attempt to extirpate Christianity.

Patron of: coppersmiths, coalmen, gardeners, cripples; invoked against gout, rheumatism and any dangerous or difficult situation