Bethany is two to three kilometres from Jerusalem and is known because Jesus passed through there several times during His public life. It was the village of Lazarus (hence the name given to it by the Arabs, al-Azariya, which means “of Lazarus”) and of his two sisters Mary and Martha. 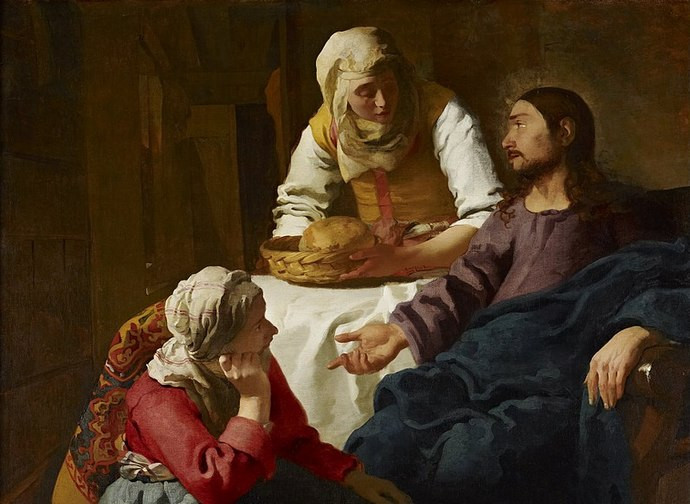 Bethany is two to three kilometres from Jerusalem and is known because Jesus passed through there several times during His public life. It was the village of Lazarus (hence the name given to it by the Arabs, al-Azariya, which means “of Lazarus”) and of his two sisters Mary and Martha. All three are commemorated today by the Church, although only Martha’s feast is included in the General Roman Calendar as an obligatory liturgical memorial, to be celebrated in all the places of Christianity where the Roman rite is in use. Previously Lazarus was commemorated on December 17, but with the 2001 edition of the Roman Martyrology (the first since Vatican II) his commemoration has been moved to July 29, the traditional date for the liturgical worship of Martha. For reasons that would merit further analysis, to this date has been added the commemoration of their sister Mary of Bethany, who for a long time was identified with Mary Magdalene (as well as with the penitent sinner who sprinkled perfumed oil on Jesus' feet, kissing them and drying them with her hair; Lk 7:36-50).

Martha is mentioned in three significant Gospel episodes, in which she is portrayed as a woman solicitous in serving and meeting the Master. Luke shows her in the act of welcoming Jesus into her house, in the midst of the labours of His apostolate: “Martha was encumbered with much serving” while her sister Mary, model of the contemplatives, listens to the word of Our Lord. Hence Martha’s famous complaint: “Lord, dost Thou not care that my sister hath left me to serve alone? Bid her therefore that she help me”, which gave Jesus reason to transmit a teaching on which Christians of all times have had to meditate: “Martha, Martha, thou art anxious and troubled about many things. But one thing is needful, and Mary hath chosen that good part, which shall not be taken away from her” (Lk 10:38-42). One could say that at that time the good Martha had not yet found that balance between ora et labora, between concentration on God and work, which would be well expressed in the doctrine of Saint Benedict, and which everyone, not only monks, is called to seek. But certainly, as Saint Augustine commented, she was already on the right path: “You have not chosen a bad part; but she a better”.

We again come across Martha, who certainly kept the Master’s words in her heart, in the episode of the Resurrection of Lazarus. As soon as she heard that Jesus, risking his life, was returning to Bethany, she immediately went to meet him and spoke these words to him “Lord, if Thou hadst been here, my brother would not have died. But I know that even now, whatsoever Thou wilt ask of God, God will give it Thee.” When Jesus then announces to her that her brother will rise and asks her to believe in Him, she again makes an open and inspired profession of faith: “Yea, Lord, I believe that Thou art the Christ, the Son of God, who should come into the world.” (Jn 11:1-46). The third episode takes place after the resurrection of Lazarus, when Jesus is hosted for dinner in Bethany: Martha is intent on serving the guests and Mary on sprinkling the Lord's feet with a very precious oil of spikenard, drying them with her hair, a few days before the Passion and then the burial of His most sacred Body (Jn 12, 1-11).

Saint Augustine also wrote: “Martha and Mary were two sisters, not only on the level of nature, but also on that of religion; both honoured God, both of them served the Lord present in the flesh in perfect harmony of feeling. Martha welcomed Him as pilgrims are welcomed, and yet she welcomed the Lord as a servant, the Saviour as a sick person, the Creator as a creature; she welcomed Him to nourish Him in His body while she had to nourish herself with the Spirit. [...] Moreover, you, Martha, be it said with your good peace, you, already blessed for your praiseworthy service, as a reward you ask for rest. [...] But tell me: when you get to that homeland, will you find the pilgrim to welcome as a guest? Will you find the hungry one for whom to break bread? The thirsty one to offer drink to? The sick man to visit? The quarrelsome one to bring back to peace? The dead to bury? There will be no room for all that up there. Then what will there be? What Mary has chosen: there we will be fed, we will not feed others. [...] And do you really want to know what will be up there? The Lord Himself says of His servants: Verily I say unto you, that he shall gird himself and make them to sit down to meat, and will come forth and serve them. (Lk 12:37)”.